War, flesh and kitchen utensils: Mona Hatoum brings it on home in this sore but satisfying Tate Modern retrospetive

7 CW readers are interested
Mona Hatoum review, Tate Modern 4 Mona Hatoum review, Tate Modern Ali Godwin
Mona Hatoum: Barbed wire and beating hearts
Palestinian Mona Hatoum is one of the most important artists working today. She rose to prominence in the 80s, emerging from a Leftist countercultural scene dominated by performance art and identity politics. But Hatoum has transcended these labels; her voice is universal and a force for peace, the world over. This is her (long overdue) first major UK survey.
To the left of the gift-shop, out on the balcony, something takes you by surprise. When you’d thought the Tate Modern’s inflamed Mona Hatoum retrospective was done with you, there it is: a wall of burlap sandbags, sprouting grass and blocking the view of St. Paul’s dome.
We know the sight from conflict photography or news bulletins: this is the transitory architecture of war, a makeshift defence. Except – look at the weeds - these bags aren’t temporary; they've been here a long while. The sculpture, which acts as the exhibition’s back garden, is called Jardin Suspendu; a remark on the fact that the Hanging Gardens of Babylon were in ancient Iraq, now razed by war. 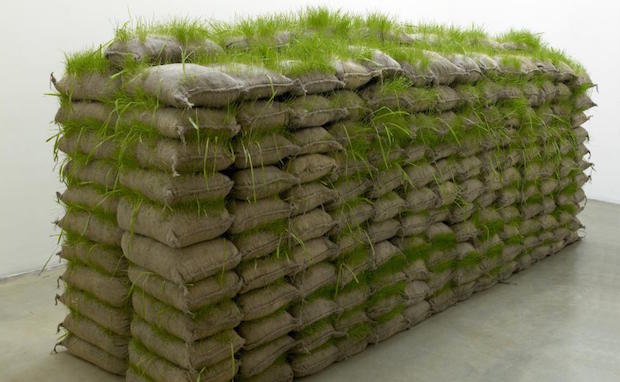 From the Pompidou Ecxhibtion: Mona Hatoum Jardin suspendu, 2008. FNAC 10-975. Centre national des arts plastiques © Mona Hatoum/ CNAP/ photo : Marc Domage, Paris
This work is typical of Palestinian artist Hatoum; in every way. It catches you off-guard. It forces the mundane into profundity. It references conflict. As a ‘readymade’, it’s in dialogue with art history. It’s ambiguous; desolate and hopeful. And lastly, its title is a slightly smug pun.

This is Hatoum's first major London exhibition; odd, considering she is one of the foremost artists of her generation. She grew up in Beirut but moved to England in 1975 when war broke out in Lebanon. When the conflict erupted, the artist was on holiday in London. She was separated from her family for 9 months. Hatoum found herself at Slade art, and with her studies, found the means to rail against her homeland’s civil war and the mechanics of human oppression.

At the beginning of her career, Hatoum experimented with video art and performance: she first made a splash in 1982 when she writhed around naked inside a transparent plastic box, smeared with brown clay at the Aspex Gallery in Portsmouth. Later in her career, the artist turned to sculpture and installation. All four of these media are at the Tate in full force.

Hatoum has a way of corrupting domestic objects. Her work makes the familiar hostile; uncanny. We have a cheese-grater, blown up to human proportions. In two pieces, the brutal metal appears as an eighteenth century screen and chaise longue. The result is uniquely unnerving. There are traditional Palestinian soaps with pins sticking out of them, chairs which have retreated into desks, speaking mirrors. The centre of the exhibition is Homebound; an assemblage of kitchen utensils and electrical goods, which thrums with a lethal electric charge. In performance video Measures of Distance, Hatoum’s mother cries “the house has lost its soul”. Civil War gets into our favourite, most familial spaces. 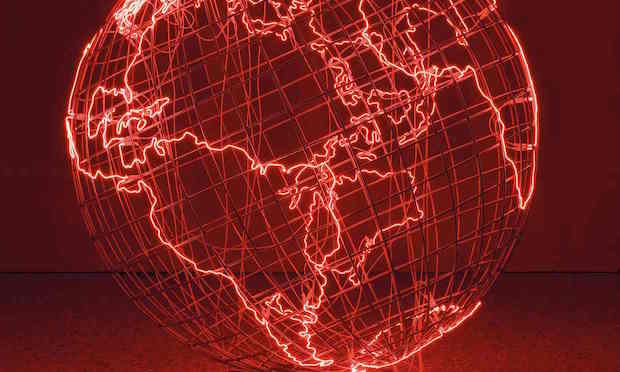 The show gets even closer to home, so to speak. The artist is fascinated by the frailties and resistance of the human body; and its traces are everywhere. Nails, urine, blood, hair (check out Jardin Pubic). The squeamish would do well to steer clear of Corps Etranger in which Hatoum inserts miniature cameras into each orifice. (The most remarkable pieces, though, are the larger, later installations.)

For 35 years, naysayers have charged Hatoum with a lightweight status; claiming that her art is no different to the work coming out of Central St. Martin’s. If there is any similarity, it is because this is exactly the kind of art that students are trying to make. Simple, gutsy stuff; high in concept yet packed with emotion. We would rather spent three hours here than one more minute at the Tate Britain’s insufferably high minded Conceptual Art in Britain. This exhibitions speaks clearly; clear enough that kids’ll get to grips with it. In fact, it might well get them hooked on contemporary art.

Don’t listen to the detractors; this has something to say to everyone – which, surely, is what this stuff is all about.