Widely recognised for his vigorous satirising of society’s ever-growing obsession with commodification, conceptual artist Bickerton has a complex relationship with the environment. Ornamental Hysteria is an assemblage of photocollage, sculpture, paint and digital image, a fascinating insight into its creator's thinking. 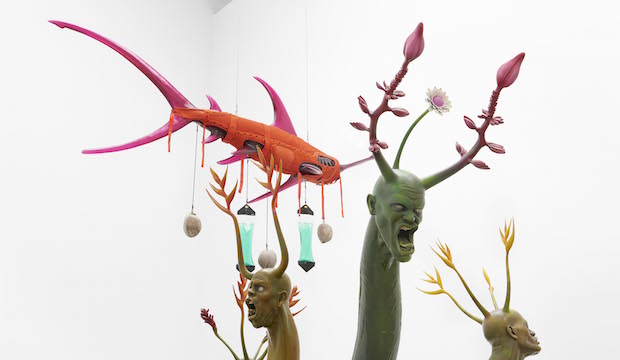 Bickerton emerged as one of the key players of the Neo-Geometric Conceptualist movement that exploded in New York’s East Village in the early 1980s. The ‘Neo-Geo’ artists, including the celebrated Haim Steinbach and sometime pal Jeff Koons, aimed to reframe the creative process within the context of a booming materialist appetite.

Despite abandoning the urban jungle for Bali in the mid 1990s, Bickerton has not blunted his cutting edge; his more recent work is as controversial as ever. No wonder then that Hirst’s own collection features more than 50 of Bickerton's works, spanning the past three decades.

Walking around Hirst’s chronologically curated collection, it soon becomes clear that the primary focus of Ornamental Hysteria is Bickerton’s play with themes of opposition. Tensions between representation and reality, liberty and restraint, nature and artifice dominate the space. The opening gallery, featuring a selection of Bickerton’s early steel and aluminium, wall-mounted creations, offers a poignant critique of contemporary consumerism. In his self-portrait, Tormented Self Portrait: Susie at Arles, Bickerton splits his selfhood into the brands that make and take up his daily life, Google, Colgate, Canon, Durex.

The upstairs galleries, however, bear out a shift in theme from the social to the natural and, more specifically, to man’s destruction of the ecosphere. The plastic sharks trussed up in lengths of rope and cotton webbing, which hang from the ceilings – along with the two resin manta rays bundled up as one in what looks like a splash-patterned straight jacket – appear suffocated, restricted and restrained. While the coconuts in Double Manta II (white) add a touch of the natural to the overall image, it is nevertheless disquieting. 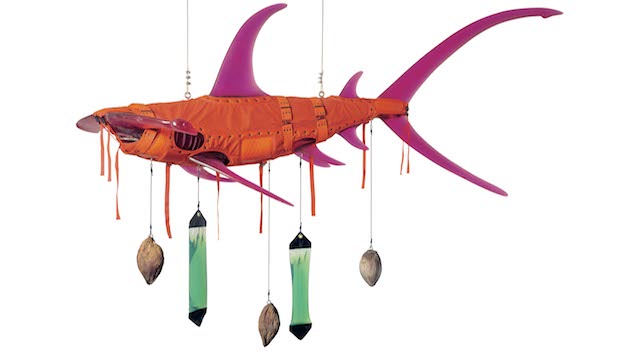 Bickerton’s visual satires cut deep. But it’s not all moral doom and gloom. The Wall-Wall series, conceived in the 1980s, features painted surfaces interrupted by irregular fibreglass protrusions, simulating rocks. Identified as essential to Bickerton’s understanding of both the act and object of painting, they are described by the artist as ‘something that fills a space on a wall with colour that affects meaning – a surrogate wall so you’re not looking at blankness.’ A little light relief at last.

Engaging, clever and, at times, downright funny, Bickerton’s first UK show since 2009 is well worth a visit. If you like Koons and Hirst, you will like this show. But conceptual sceptics should steer well clear. 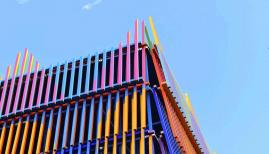 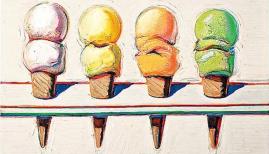