Edward Burne-Jones on the Arnolfini Portrait, 1897

In 1848, disenchanted with the contemporary mechanistic and academic approach to painting propagated by the Royal Academy, a group of young British artists branched out to found the Pre-Raphaelite Brotherhood.

The name reflected their preference for and stylistic interest in Late Medieval and Early Renaissance art that came ‘before Raphael’. The brotherhood sought a return to the detailed compositions and vibrant, bold colour palette of Quattrocento Italian art (art made in Italy between 1400 – 1499).

TRY CULTURE WHISPER
Receive free tickets & insider tips to unlock the best of London — direct to your inbox
But, above all else, this band of artists sought inspiration from one particular portrait that hung in the National Gallery just a few rooms away from where they studied at the Royal Academy School of Art. This portrait was Jan van Eyck's Arnolfini Portrait, 1434. Later dubbed the 'finest picture in the world', the Arnolfini Portrait, triggered a revolution in British painting.

Or so argues the National Gallery’s Reflections: Van Eyck & The Pre-Raphaelites. In four small rooms Reflections reveals the different ways these young nineteenth-century British artists responded to van Eyck’s painting, and in particular, to one of its most distinctive features, the convex mirror.

In homage to van Eyck, the Pre-Raphaelites exploited the convex mirror as a device to explore ideas of distortion, doubling and reflection, as well as a technical means to convey complex psychological dramas within the domestic interior. The exhibition seems to fetishisize this idea and exploit it, despite seeming unbearably tenuous at times.

The exhibition narrative is fragmented, and a little clumsy, but in essence, the exhibited works are grouped in thematic sections. Unsurprisingly works featuring convex mirrors abound. In one room there are those, influenced by Velazquez’s Las Meninas – who would have seen van Eyck’s portrait at the Spanish Court while he was official painter to Philip II – and in another there are those influenced by Alfred Tennyson’s 1832 The Lady of Shalott. Finally, we are introduced to the physical convex mirror itself, and two rooms of more Victorian fodder follow.

Every way which way you turn, there hang Victorian paintings with mirrors. Next to them are accompanying hefty text panels explaining why they, or at least in part, are inspired by the Arnolfini Portrait. The slippers, dogs, dresses and mirrors that pop-up in the works of the Pre-Raphaelites are, or so seem to emphasise the curators, all indebted to van Eyck’s portrait. It gets a bit fanciful, so thankfully, at the heart of the exhibition is the Arnolfini Portrait.

Acquired by the National Gallery in 1842, the Arnolfini Portrait has become one of the most famous paintings in the world. Painted in 1434, the portrait shows an elegant couple – now recognized as members of the Arnolfini family from Lucca – standing hand in hand inside a domestic but ornately decorated interior. Dressed in fashionable robes of the day and coiffed appropriately, the couple, accompanied by a small shaggy brown dog, stands tall.

The rich colours, the brilliant finish, van Eyck’s attention to detail, its technical virtuosity and its symbolic potential have made it the subject of art historical analysis for decades. Reflecting the backs of two figures entering the room, the mirror distorts the painting’s perspective, providing the canvas with an added depth and element of intrigue. It's also hung lower than usual and on display without an intimidating rope barrier – so it really is a marvellous opportunity to stare at it in all its glory.

While the premise of the exhibition is interesting enough, it feels arbitrary at times. Pre-Raphaelite aficionados among you, however, will love it! 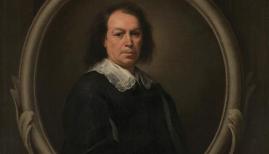