1 CW reader is interested
Lee Bul: Crashing, Hayward Gallery 3 Lee Bul: Crashing, Hayward Gallery Harriet Lovejoy
The first thing that you encounter upon entering Crashing – the first major London show for South Korean artist Lee Bul – is a huge grotesque figure suspended in the air, its red colour is alarming, even disturbing. Throughout the whole show objects often confront you in a very direct way, appearing like obstacles along a journey through a dystopian universe. Robotic figures from Bul's Cyborg series, with their missing limbs reminiscent of classical sculpture hang overhead in one room whilst in another, tangles of monstrous ochre-coloured limbs appear fixed to a wall.

TRY CULTURE WHISPER
Receive free tickets & insider tips to unlock the best of London — direct to your inbox
This mid-career survey, presented as part of the Hayward Gallery’s 50th anniversary celebrations, is at once sinister and utterly beautiful. Sinister beauty is Bul's trademark style: it's what has made her the most famous artist in South Korea. With 118 works spanning from the 1980s to the present day, Crashing is Bul's first major UK show to date. It's an overtly political survey that confronts, shocks and challenges any notion of idealism. But, as always, political context is key to understanding Bul's work. And, unfortunately, here, with sparse text panels, and little additional information, much has been lost in translation. 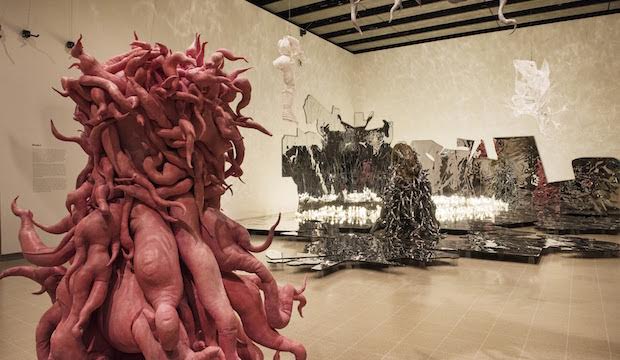 Lee Bul, Installation view of a work from her Monster series and Civitas Solis II

Born in Seoul in 1964 under the military dictatorship of Park Chung-hee, Bul, like many of her contemporaries, grew up in fear. Her work reflects the political, social and economic traumas of her country's turbulent past. Laced with terror, her mixed-media sculptures, speak of trauma and disturbing personal experiences. Her Monster series is among her most well known. With bloated tendril-like limbs, Bul's Monsters haunt the viewer. They bleed the memories of a tortured, repressed people. They represent so much more than the material sum of their parts. They are remarkable. They are beautiful in the most disturbing of ways.

Alongside Bul's Monsters, we see a great diversity of mediums. Initial drawings and models of her 3D works are displayed alongside full-scale installations, videos of her early performance art; and her discordant organic and industrial works made from silk and mother of pearl or fibreglass and silicone. Among the highlight works is the chilling Heaven and Earth, 2007, an oversized bathtub filled with black ink surrounded by cracked, dirty tiles and snowy peaks – an ode to a Korean student protestor who was killed in 1964 by water tortue, the year of South Korea's first democratic elections.

Bul is fascinated by the notion that idealism – whether bodily, political or aesthetic – can lead to disaster and this seems to be at the core of several of her large scale works. Technology and the destruction its failure can produce is explored by Bul in the colossal Willing to be Vulnerable – Metalized Balloon, (2015-6) a 17m sculpture which resembles a Zeppelin, once a symbol of progress but one tarnished with catastrophe. 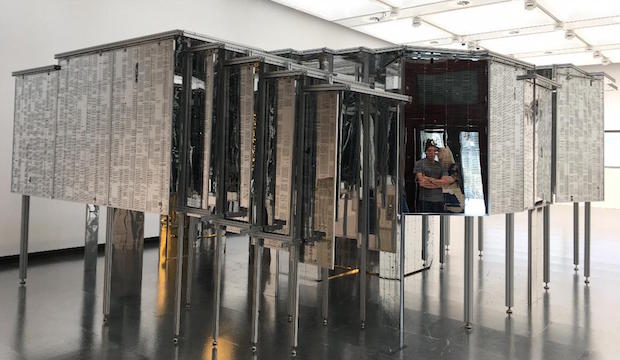 The final room is home to the sculptural installation Via Negativa II (2014) a futuristic mirrored labyrinth which disrupts our sense of space. A disorientating experience, we are faced with several versions of ourselves in fragmented form as we weave our way through provoking us to reflect on ourselves and our future.

A timely exhibition, Crashing, is not a conventional display of ‘beautiful’ things but there is a true beauty in what Bul is asking her audience to do. She encourages us to make our own interpretations of her artwork and challenges our perceptions of life, the future, technology and our ‘ideals’, trying to reveal that in desire and pursuit for perfection, there is often danger and disaster.