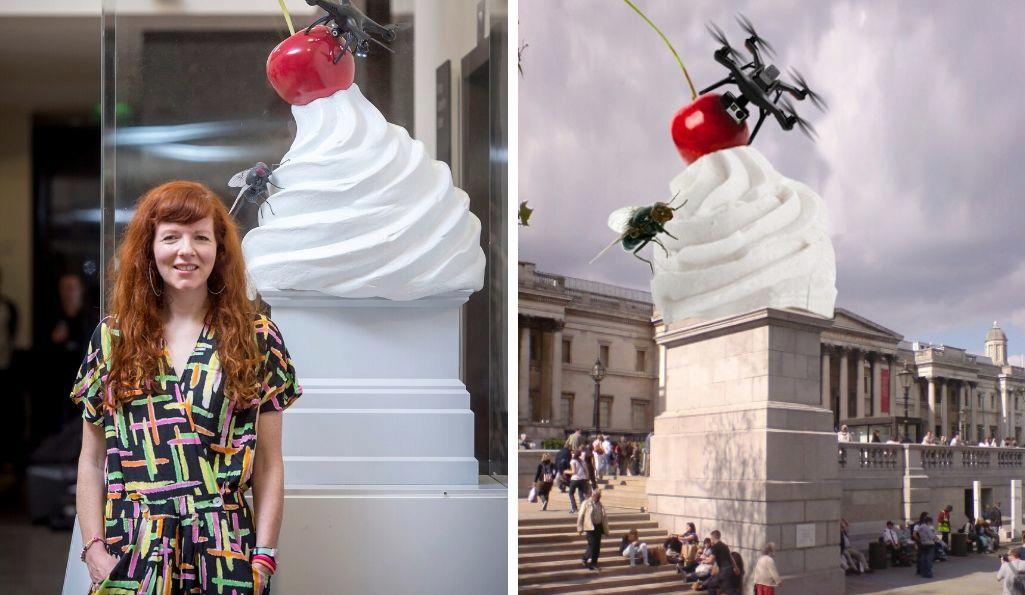 Artist Heather Phillipson's Fourth Plinth
The famous Fourth Plinth in Trafalgar Square, which has been occupied by works from Anthony Gormley, Yinka Shonibare and David Shrigley (to mention but a few) is to get a fresh dollop of art in March. Multimedia artist Heather Phillipson's installation The End has been chosen to occupy the illustrious spot outside the National Gallery with a work that depicts a large serving of whipped cream crowned by a drone.

Known for addressing post-apocalyptic issues and questions surrounding consumption (you might have seen her pop art piece about eggs on the platform of Gloucester Road tube station), Phillipson has chosen to again use food in her work, this time as a metaphor for society's ills. In addition to a large drone, the installation will also include an enormous housefly, a symbol used in art throughout history as shorthand for decay and the fleeting nature of things.

The End tackles the space it occupies. Trafalgar Square is a site loved by tourists and used by performance artists, protesters and broadcasters. Phillipson has taken ideas of consumption, civil unrest and surveillance and bound them up in one sculpture that will sit uneasily as a symbol of impermanence and 'impending collapse'. The drone represents our being watched and mimics the fly that accompanies it. Everything about this this work concerns the fleeting and is intended as a comment on the times we live in, on politics, over-indulgence and concerns over privacy. No doubt Phillipson is hoping this sculpture will start conversations and it is sure to whip up a lot of interest.