The National Maritime Museum is shining a spotlight on present-day seafarers in its year-long exhibition Exposure: Lives at Sea

3 CW readers are interested
Exposure: Lives at Sea, National Maritime Museum review 5 Exposure: Lives at Sea, National Maritime Museum review Holly CW
Despite the fact oceans make up 70 per cent of the earth’s surface, the vast majority of us know little about what life at sea entails. Major documentaries fronted by the likes of David Attenborough offer insight into pockets of underwater ecosystems, but the lives of working seafarers remain largely out of the public eye. Curator Laura Boon is fascinated by the versatile experiences of those who spend months of the year at sea, often out of contact with loved ones. Identifying six subjects who work worlds apart from one another – both geographically and professionally – she has curated an exhibition of their photography, Exposure: Lives at Sea.

In order to capture life at sea through an honest and authentic lens, a key criteria for Boon’s exhibition was that all subjects featured must be professional seafarers with a secondary passion for photography, rather than commercial photographers. As a result, the images offer a window onto intimate moments between crew members, magical happenings beneath the water’s surface, the harsh realities of months spent living in tough conditions and the slivers of hope that slice through that darkness – all of which would have been invisible to the inauthentic eye. 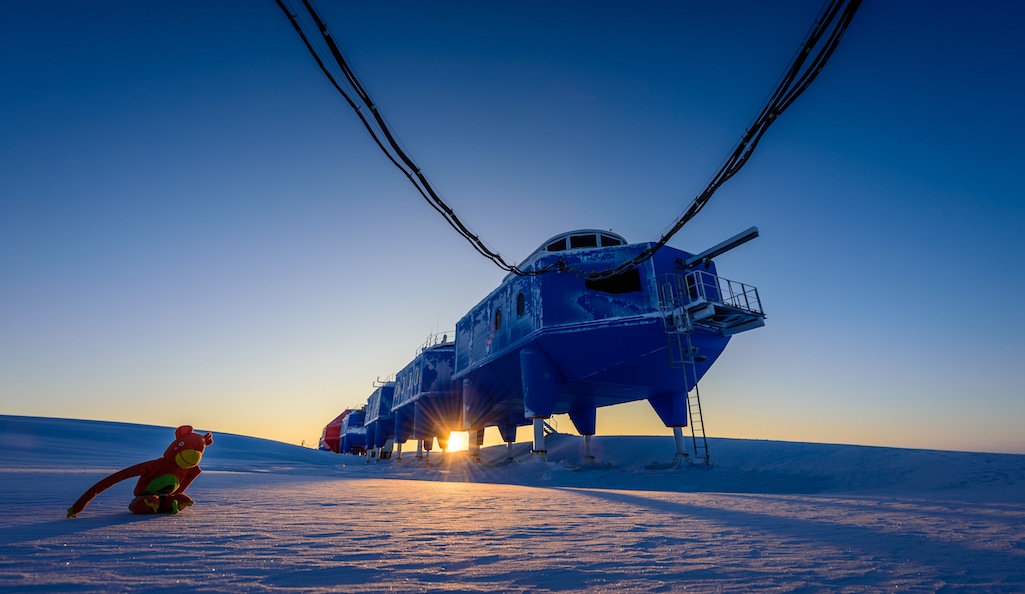 By kind permission of artist. © Michał Krzysztofowic_The Sun is finally up! _MK

As a whole, the exhibition is a smörgåsbord of pictures taken around the world – from the colourful reefs of Mexico to the ice caps of Antarctica. It spans a broad range of issues faced by those at sea, among them concerns for the environment, the global fishing trade, coping with loneliness and even being stranded on board a ship during the Covid-19 pandemic.

Fusing still images with explanatory text and videos of each photographer speaking candidly about their work, the exhibition also fulfils Boon’s aim of exposing our oceans as vital sources of food, energy and transport, used by people across the world. It hammers home her point that, far from being merely a matter of historical significance, our oceans play myriad roles in supporting contemporary society. 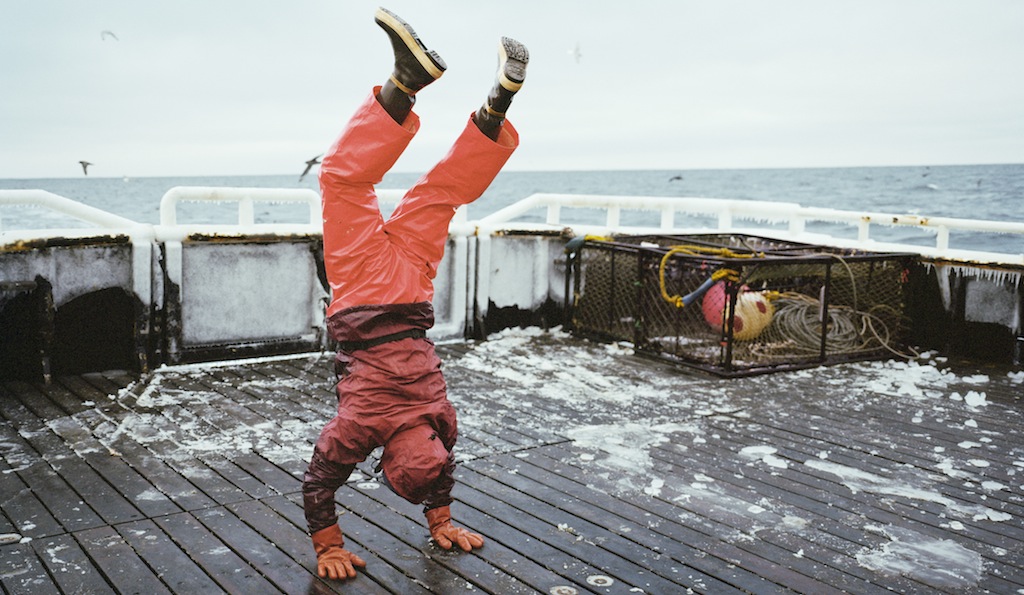 Commercial fisherman Corey Arnold brings the viewer up close to the ominous, angry Alaskan waves, then softens the scene by sharing with us a playful side to life on board his ship – captured through a handstand.

Peter Iain Campbell, a Scottish oil-rig worker based in the North Sea, uses portraiture to reveal the intimate friendships forged between crew members aboard his oil rig, focusing on how starkly different and industrial their working environment is compared with life at home.

The pictures captured by Octavio Aburto could, without context, be enjoyed as colourful snapshots of marine life dancing below a canopy of fluorescent underwater plants off the coast of Mexico. But while the National Geographic explorer and photographer has an eye for an arresting image, he uses his photography to remind the viewer of the fragile balance between ecotourism and healthy marine development. 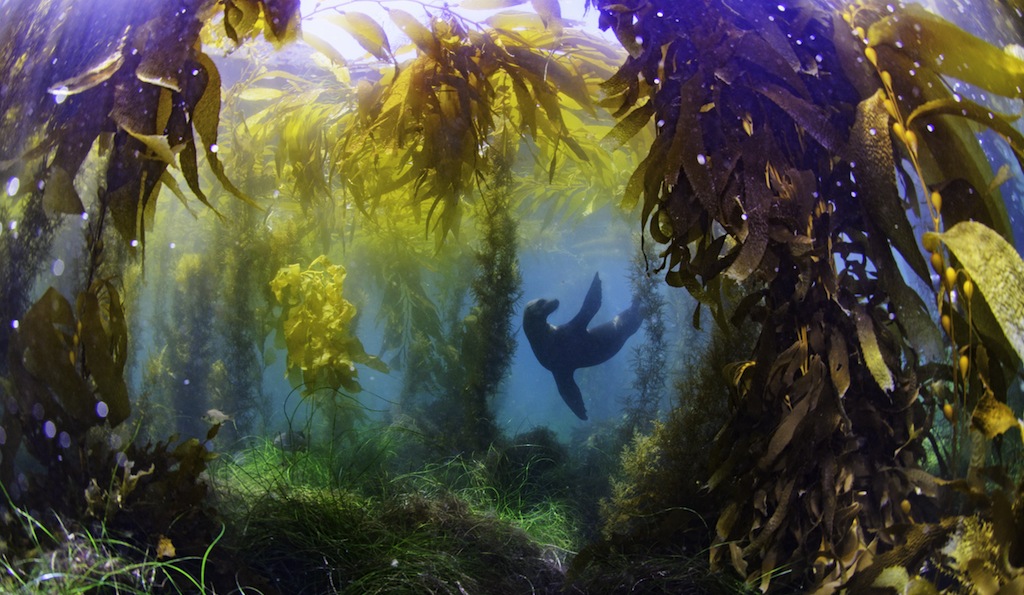 It’s conservation photographer and underwater journalist Jennifer Adler who, through mesmerising pictures taken on professional dives, introduces the threat of climate change to the exhibition. Using a series of images of marine biologists observing and collecting specimens from the ocean’s bed, she exposes concerns over the health of our oceans and what we can do to protect them.

Michał Krzysztofowicz, meanwhile, is among a brave minority of seafarers working as a data manager on the British Antarctic Survey’s Halley IV Research Station – one of the most remote workplaces on Earth. Left with supplies to last them through winter, 13 researchers spend eight months of the year in isolation, a reality Krzysztofowicz documents through shots of snowy landscapes, personal photos of his teddy bear – a prop used by he and his partner to communicate while separated – and images capturing the jubilation of the crew when a helicopter arrives bearing supplies – a welcome interruption to their isolation. 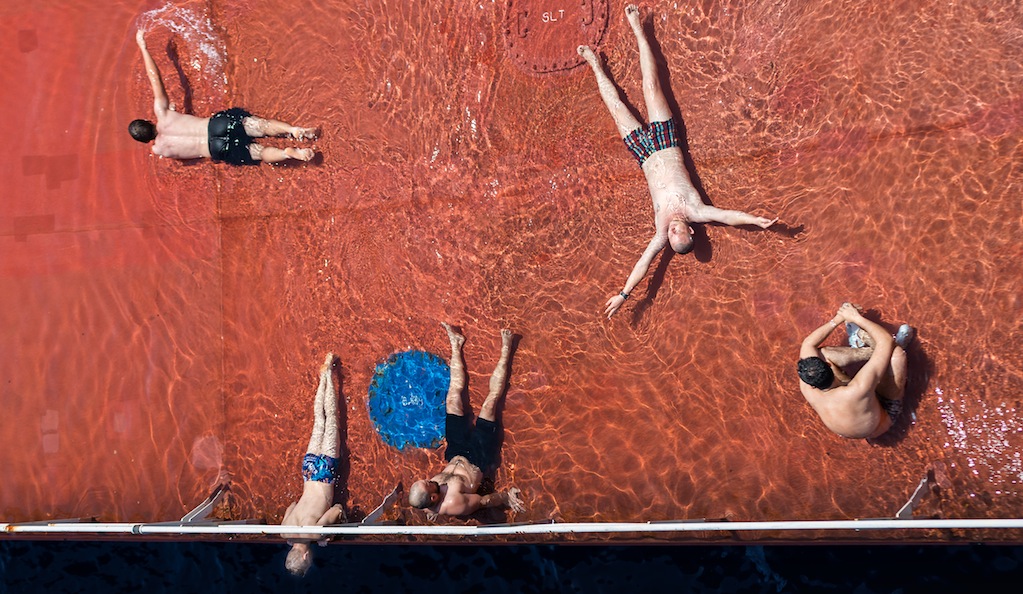 The latest addition to the exhibition explores the reality of being a seafarer in the context of the year 2020 has turned out to be. Engineer and photographer Cezar Gabriel illustrates life on board his ship – which spent three additional months at sea, unable to dock in Brazil because of this Covid-19 pandemic – through a series of artistic and versatile shots. In one particularly arresting photo, Blowing off Steam, Cezar captures from above crew members swimming together on a flooded deck. It’s an image that summarises the longing, waiting and drifting they were subjected to while stranded off the coast.

Each of the six subjects tells their own fulsome and insightful story, allowing us to peer into a unique and unusual way of life. Exposure leaves the viewer with an awareness of the human stories behind the working worlds of its subjects, and with some understanding of just how many more stories – unfolding on different seas for different seafarers – must be out there, waiting to be explored under another lens, another time. 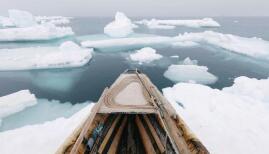 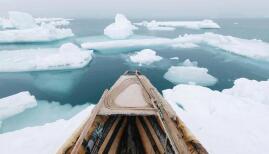 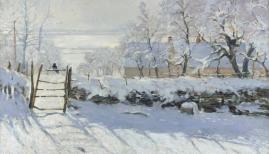