10 paintings to get you in the mood for winter 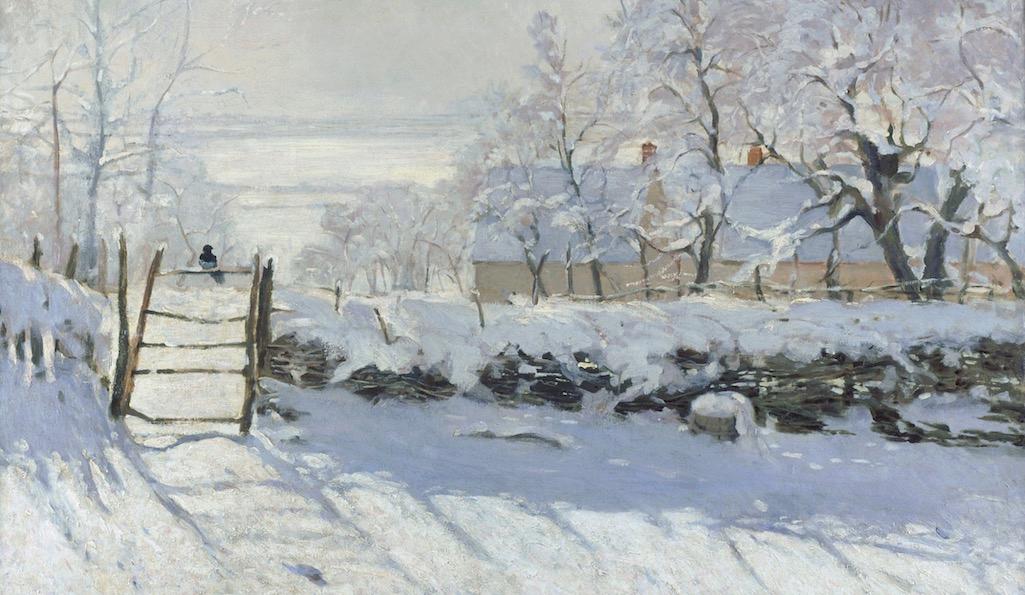 10 paintings to get you in the mood for winter
Many of us dread the short days, cold weather and inevitable sniffles that come with the winter months, but there's also a lot to love about the season. Art, as is often the case, reminds us of the beauty and the magic of the world, so we think it's the perfect way to get in the mood for frosty mornings and cinnamon-flavoured everything. From ice skating to Christmas hampers, here are some of the most evocative images of wintertime.

Pieter Bruegel the Elder, The Hunters in the Snow (1565) 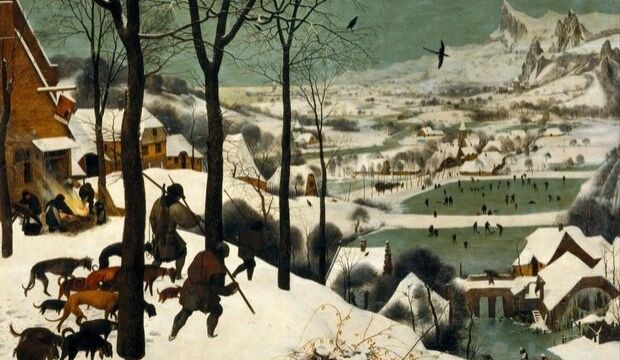 Pieter Bruegel the Elder, Hunters in the Snow (1565), Kunsthistorisches Museum,Vienna

Between 1300 and 1850 Europe suffered a 'mini ice age.' The winter of 1564 was particularly harsh; rivers froze and food was in short supply. That same year Bruegel the Elder painted Hunters in the Snow. This painting shows the freezing conditions as a mixed blessing. Men return from a hunt, hunched against the cold with no more than a skinny fox to show for their efforts, while down on the frozen ponds people play games closely resembling ice hockey and curling
Hendrick Avercamp, A Winter Scene with Skaters near a Castle (1608) 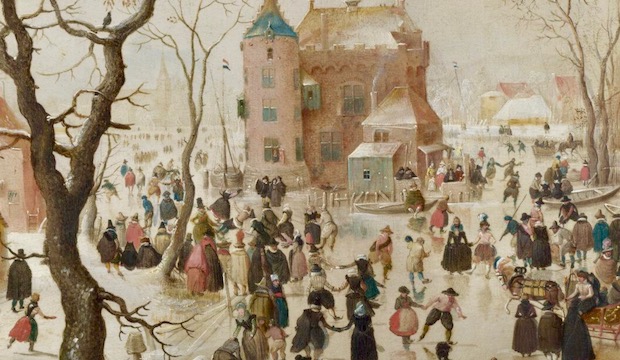 Hendrick Avercamp was an artist who specialised in frozen scenes. He was mute and rarely left his home town of Kampen in the Netherlands, and the painting above is an imagined place. Here, people skate around a pink castle where boats are frozen into the ice. Some skate with flair, while others struggle to stay upright. It is a scene familiar to anyone who has stepped onto an ice rink and has started us thinking about putting on our skates this winter. 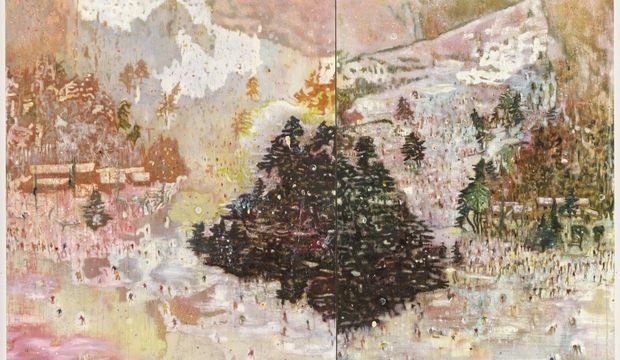 Peter Doig painted this scene of learner skiers on a Japanese mountain and one of the most impressive things about this work is the evocation of cold through the use of warm tones. Dotted all over the canvas are tiny, colourful figures, slipping and sliding over the snow as they attempt to keep their balance. 'I often paint scenes with snow because snow somehow has this effect of drawing you inwards and is frequently used to suggest retrospection and nostalgia and make-believe,’ Doig said of his love of wintry subjects. 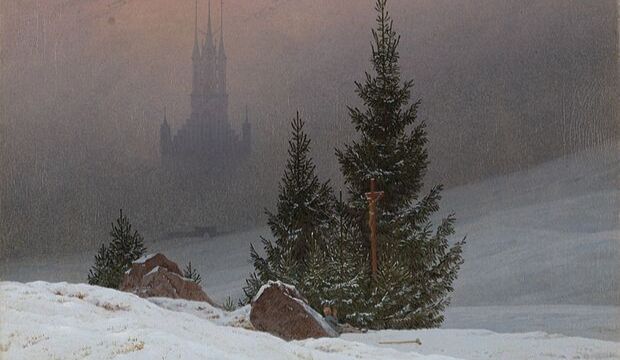 This beautiful but sombre painting by the great romantic painter Caspar David Friedrich shows a small collection of fir trees in the winter gloaming, mirrored by the ghostly silhouette of a cathedral in the distance, which rises up out of the mist. Look more closely and you can see a small figure in the foreground, leaning against a rock beneath a cross. This person has discarded his crutches in the snow, his hands together in an act of prayer. He is giving himself to the mercy of God in hope of a miracle, perhaps, or more likely, in the hope of resurrection. 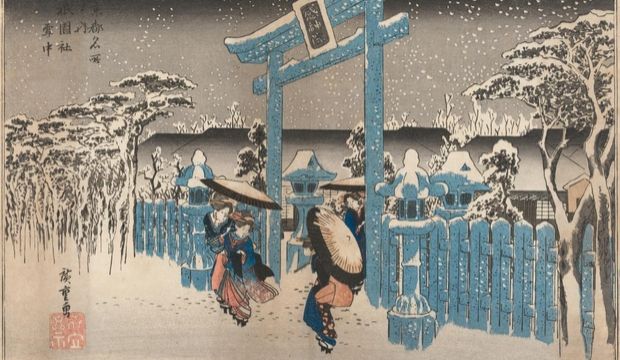 Utagawa Hiroshige is one of the most well-known artists of the Ukiyo-e, or 'floating world.' This beautiful woodblock print of elegant women in the snow is one of a series entitled Famous Views of Kyoto. Hiroshige was an absolute master of his craft. Here he artfully picks out the women's kimonos with warm orange tones, contrasting them against the blues and greys of the snow-muffled scene. 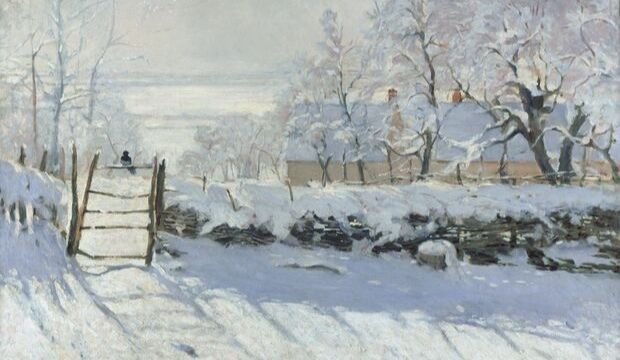 This is one of many snowscapes painted by Claude Monet, the impressionist master of light. It depicts a lone magpie on a rustic gate, the weak winter sun casting pale blue shadows. This painting was created in Étretat, France, where Monet's patron had arranged a house for the painter, his girlfriend and their newborn son, so the family could stay together while Monet worked. 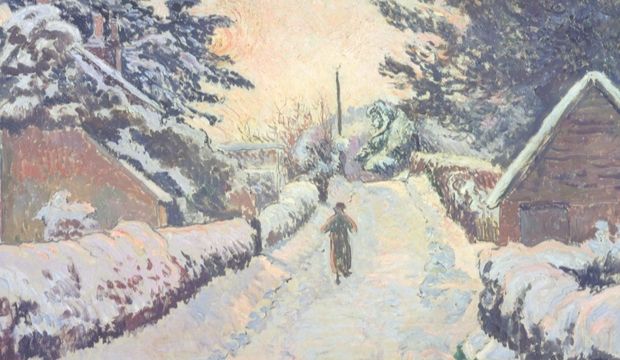 Pissarro's scene of a figure trudging along a country lane, the collar of his long coat turned up, really evokes what it feels like to walk through the snow; you can almost hear the crunch, crunch, crunch underfoot. The afternoon sun peers out from behind a tree, flooding the scene with a subtle pink light. Just look at that hedge on the right; a really beautiful combination of colours. 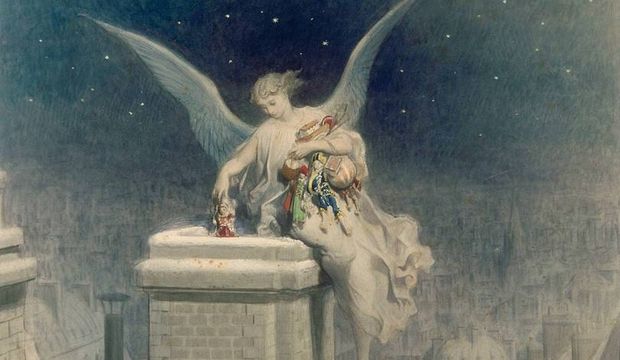 This delicate watercolour by French artist Gustave Doré (1832-1883) depicts an angel dropping toys into chimneys for children on Christmas Eve. The city stretching out in the distance might well be London, as the scene resembles another work by the artist titled London, a Pilgrimage. If this image doesn't reignite childhood memories of the magic of Christmas Eve, nothing will. 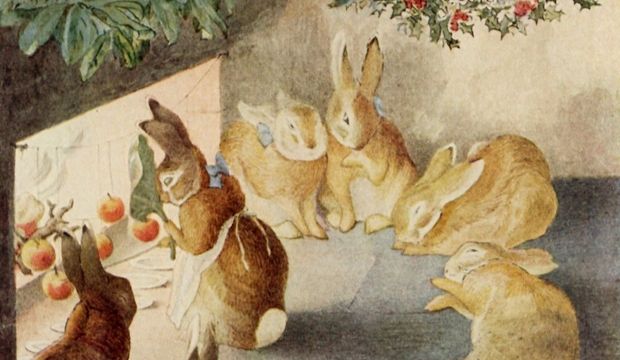 It proved surprisingly difficult to to find fireside paintings, but Beatrix Potter didn't disappoint. This watercolour is from a series she made (and gifted to her aunt), entitled The Rabbits' Christmas Party. The illustrations show the furry guests arriving, enjoying Christmas dinner and roasting apples for dessert (above). We can't imagine a cosier scene. 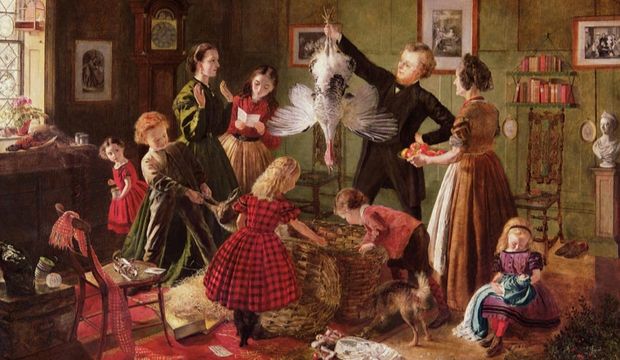 Robert Braithwaite Martineau (1826-1869) trained under the Pre-Raphaelite artist William Holman Hunt. For the most part, he painted sentimental scenes but if you can't be sentimental at Christmas, when can you? Here, the man of the house triumphantly lifts a turkey from a wicker hamper, as his daughter reads the accompanying note. The work is a red and green celebration of generosity in the festive season. All that's missing is a Christmas tree.
Share: