To Hockney, now 78, painting should be either portrait, landscape or still life. He comprehensively covered landscape in the 2012 Royal Academy blockbuster show ‘A Bigger Picture’. 600,000 members of the public visited these massive pictures of Yorkshire countryside, some drawn on an iPad, yet the show received some criticism for not saying very much, for having images that were too giftshop-worthy.

Now Hockney moves to portraits and still life, but this exhibition, too, could be criticised. 82 portraits with the same background? It sounds repetitive, maybe even boring. Actually, it’s a very pleasing experience.

Unlike the quiet solitude of Yorkshire landscapes, we imagine the sitters have a lot to say: about their painter and their friend, about the experience of sitting for Hockney over a period of three days each in his LA home. It’s very easy to imagine the warmth with which Hockney assembled this exhibition. 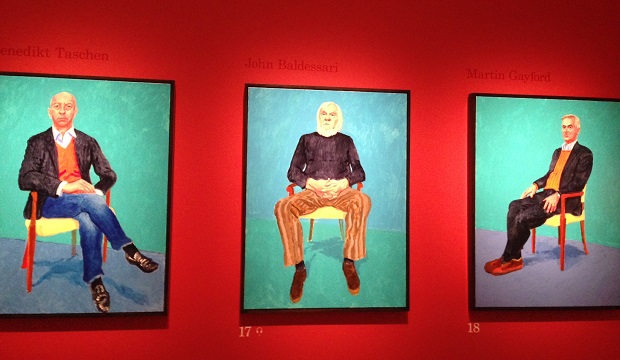 The project is the fruition of a state of intense painting after a rattling event. Hockney’s assistant died tragically in March 2013, leaving him remorseful and lost. Hockney made the first painting in this series in July 2013, of a man with his head in his hands. This roughly-finished canvas heralded the beginning of a new intense period of work which continues to this day.

Hockney’s set-up was a yellow dining chair on a platform, placing sitters at eye-level with the standing artist. The finished portraits are simply hung in chronological order. The problem with homogeneous series is that the eye strives to differentiate. “Everyone sits down in a slightly different way,” notes Hockney. There’s a still life (bright and with playful perspective, filling in where one sitter could not make their appointment), there’s one double portrait, there’s one prop (held by the youngest sitter 11-year-old Rufus Hale).

The sitters wore what they wished. Those who wear red do so knowing they’ll stand out against the blue backgrounds. Hockney has clearly also enjoyed picking out the stripes in business shirts. People’s shoes are very telling: such as the huge, brash monochrome converse of the friend who washes his car. “Faces are the most difficult, then the hands, then the feet,” says Hockney.

It’s hard to pick highlights because everyone is clearly painted so honestly. To prefer one is to prefer one person over another. The chronological hanging finds contrasts in pairings like Chloe McHugh and Joan Agajanian Quinn: Chloe’s long legs akimbo in the foreground, Joan perched happily, delighted to be painted. 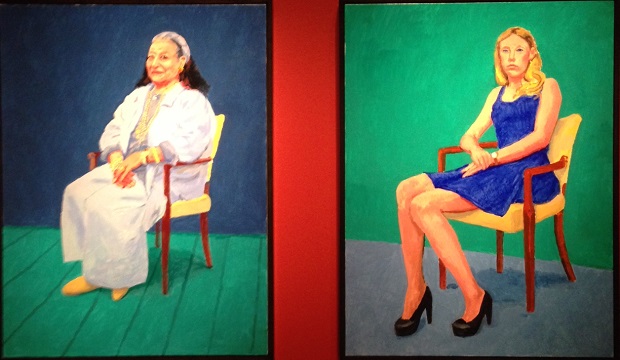 Some of the final images are interesting for their confidence: curator Edith Devaney leaning in, fascinated by what she called Hockney’s “absolute scrutiny” and the architect Frank Gehry looking relaxed and accomplished. 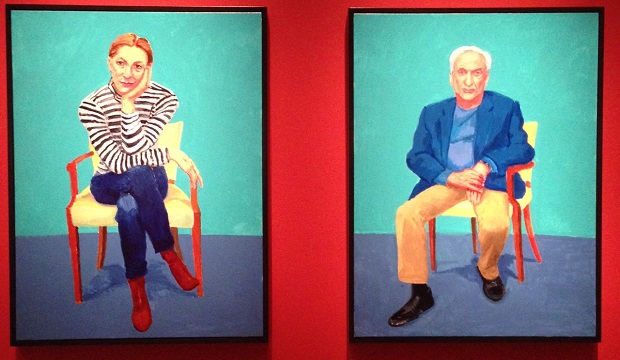 Hockney uses acrylic paint, which dries too fast for an artist to linger. Through the popping colour, it’s clear that Hockney has painted these sitters as realistically as he can. As Barry Humphries (Painting number 56, alter ego: Dame Edna Everage) says, Hockney paints “not an unkind portrait” and “he does get character”.

Praise indeed from a man for whom character is everything.