To celebrate the release of Sara Driver's new Jean-Michel Basquiat documentary, we investigate how Basquiat, a self-taught outsider, became the darling of the art world establishment. 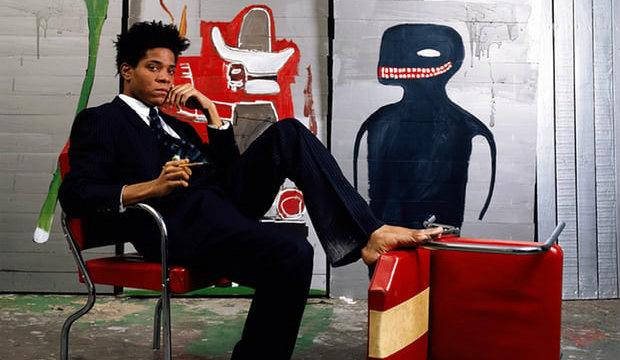 Portrait of the artist as a young man... Jean-Michel Basquiat. Photograph: Lizzie Himmel/AP/Brooklyn Museum
At $110.5 million, Jean-Michel Basquiat’s 1982 Untitled broke the world-record for the most expensive painting ever sold by a US artist. He ‘joined the pantheon of great, great artists’, cried Oliver Barker, the chairman of Sotheby’s Europe, minutes after the hammer went down in May 2017.

But unlike most of those ‘great, great’ artists, with their classical training and upper-middle class backgrounds, Basquiat was an outsider – a self-taught anomaly in a world so often dominated by the white elite. Sure he was the height of Alphabet City Cool, a friend of David Bowie, and the name to drop among hip galleristas – but the museums didn’t want to know. There are tales of big-time collectors trying to donate Basquiat works in the 80s and being refused due to 'a lack of storage space'. Trendy, maybe, but not a 'great' according to the bigwigs in charge. 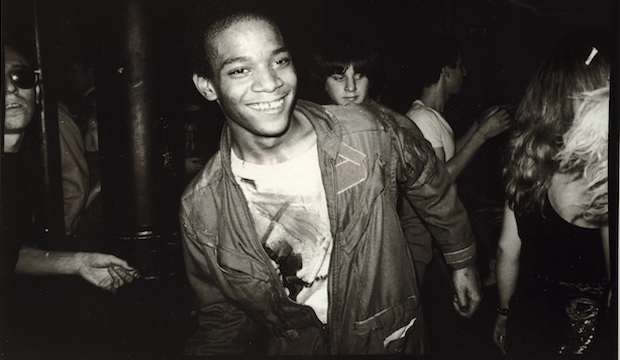 Now, the value of his work doubles with each sale and a long-overdue UK retrospective celebrating the artist in his wider cultural context was recently staged at the Barbican. So how did Basquiat become the darling of the art world establishment? And why did it take so long?

A child of the American Civil Rights Movement, Basquiat came of age in the late 70s when progressive post-punk art was thriving in downtown New York. With graffiti drawings, illicitly sprayed in subways, Basquiat and a band of counter-culture artists including Keith Haring and Jenny Holzer, fueled the appetite for anti-establishment creativity. 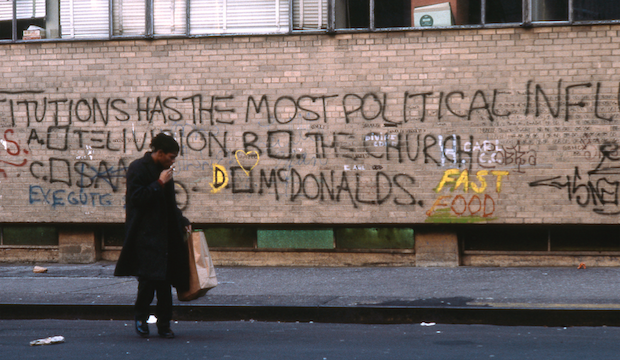 THESE INSTITUTIONS HAS THE MOST POLITICAL INFLUENCE A.TELEVISION B. THE CHURCH C. SAMO D. MC DONALDS, Jean-Michel Basquiat on the set of Downtown 81. © New York Beat Film LLC. By permission of The Estate of Jean- Michel Basquiat . Photo: Edo Bertoglio

Originally rising to notoriety while collaborating with high-school friend Al Diaz in the graffiti collective SAMO©, Basquiat’s rebellious work soon became coveted fodder for downtown galleristas. His cryptic slogans, satirising both the art world and 80s Yuppies, together with his deep-rooted precociousness were the stuff of art dealers’ dreams. He moved from the street to the gallery in a few short years.

But he was in a small minority of African-Americans working and circulating in a predominantly white art world. As a result, Basquiat’s work is both bolder and bleaker than his counter-culture contemporaries. Foregrounding the ordeals and traumas experienced by black people in America at that time, he confronts questions of race, human rights, and the creation of power and wealth while referencing his own heritage, black hero worship, anatomy, and death. His work is complex, aggressive, and, at times, brutal.

‘90 percent of his work is about anger and that pressure finds itself in his work’, said Dieter Buchhart, the curator of Basquiat’s only previous European exhibition. ‘You see dismembered limbs, heads cut off, thorn crowns’, he adds, 'his voice is bold, it's very strong'.

There’s a primitive energy to Basquiat’s compositions, played out through bright colours and tangled lines. It’s easy, in these strong scrawled marks, to overlook the sophistication. In Untitled Pecho/Oreja, sold at auction in 2013 (pictured below) a skull recalls ancient tribal masks, the visage of the vodou lord of the dead Baron Samedi, and the traditional deathly symbolism of the skull in Dutch vanitas paintings. 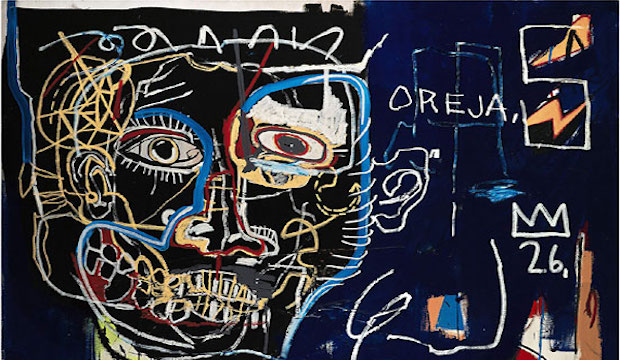 While this evocation of vodou imagery alludes to his ethnic heritage – Basquiat was born to Puerto Rican and Haitian parents but brought up in Brooklyn – it also nods to the work of Modern Masters, Cy Twombly, Picasso, Pollock, and Matisse for whom primitivism was an antidote to the conservatism of the academies.

Like many such mighty talents in the art world and beyond, Basquiat’s rise was giddying, glamourous, and cruelly cut short.

His first solo show at Annina Nosei Gallery, sold out on its opening night – earning Basquiat $250,000. Excessive riches followed, as did an intensely scrutinized friendship with Warhol, a fling with Madonna, and a film with Debbie Harry. David Bowie was a close friend but so was heroin. Life in New York’s fast lane caught up with him. Basquiat died of an overdose in 1988.

The rise and fall of the African-American wunderkind became the talk of the town. ‘The only thing the market liked better than a hot young artist was a dead hot young artist, and it got one in Jean-Michel Basquiat,’ the art critic Robert Hughes once said. Basquiat became a kind of mythical genius. 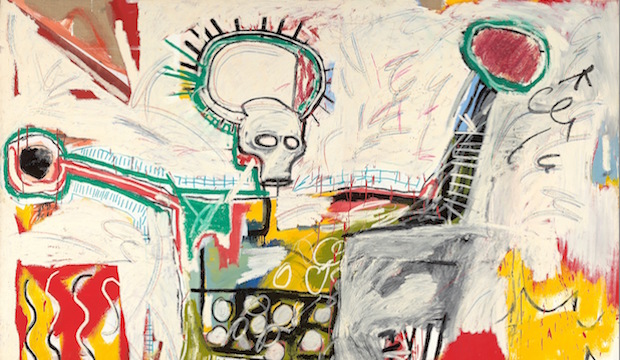 But as the rich and famous lined their walls with Basquiat’s work, the world’s most prestigious public institutions did not. Out of the more than 2,000 works of art that Basquiat produced, the MoMA has just 10 drawings, The Metropolitan two, and the UK none.

Friend and artist Michael Holman puts this grave oversight down to racial prejudice. He remembers when big-time Basquiat collectors Lenore and Herbert Schorr offered to donate Basquiats to MoMA and the Whitney in the 1980s. The museums declined the offer not even wanting them for storage. Holman once said that ‘there's a lot of racism and a lot of white privilege in the idea that only white people are important artists.’

Museums are now on the back foot and are struggling to catch up. The assistant curator of Barbican's Boom for Real, Lotte Johnson, fueled the fire by confirming that 'museums who were more conservative at that time were cautious about buying his work. Basquiat was very aware of that. Now, because of the high values his work acquires, it’s become sort of impossible for them'.

Despite minimal support from the museum body during his lifetime or the years that followed it, Basquiat has succeeded in becoming a giant of late 20th Century art. His work and his story have infiltrated popular culture around the world. He's everywhere, from Jay Z lyrics and Reebok sneakers to emblazoned t-shirts and Skateroom skateboards. Browns Mens even launched a bespoke capsule collection for men with New York Streetwear brand Rome Pays Off to coincide with the Barbican's Boom for Real opening. 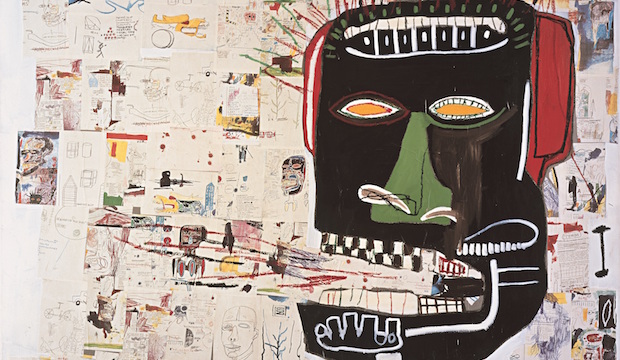 London's Barbican Centre took the first step in redressing the balance; their landmark retrospective Boom for Real explored Basquiat in all his glory. The opening room of the exhibition recreated Basquiat's first landmark show, New York: New Wave, at New York's PS1 Gallery. New York: New Wave, also featuring works by Andy Warhol and Robert Burrows, offered Basquiat a prominent artistic platform. Johnson says that 'it was the first time Basquiat showed a large body of work in public.' 'We're excited', she added when we spoke, 'to bring together fifteen of the works he showed in that exhibition for the first time since 1981'.

Basquiat referenced popular culture, and he is referenced in ours, but above all, ‘he is fiercely original’, Jeremy Strick the director of the Museum of Contemporary Art in Los Angeles once commented. His work is ‘emotionally complex and it challenges all our understandings and assumptions about modern life and art', he adds, 'it's this determination to find his own voice that made Basquiat's art so important’.

Boom for Real: The Late Teenage Years of Jean-Michel Basquiat is released in UK cinemas on 22 June 2018. Please click here for London screenings.