Wanderlust episode 4 review 4 Wanderlust episode 4 review Euan Franklin
Maintaining a polyamorous relationship must be hard, as proven by this week’s Wanderlust. The fourth episode of Nick Payne’s wittily written comedy-drama examines people’s attitudes and how people see themselves and want to see themselves. Of course this has been built up through the series: first the extramarital partners are told about the agreed-upon ‘situation’, then Joy (Toni Colette) and Alan (Steven Macintosh) tell their kids about it. But the scope is about to widen.

TRY CULTURE WHISPER
Receive free tickets & insider tips to unlock the best of London — direct to your inbox
In this episode: Joy and Lawrence the Photographer (Paul Kaye) rekindle their old friendship after the latter’s father passes away, Tom (Joe Hurst) is struggling with his feelings for his best friend Michelle (Isis Hainsworth), something is sparking between Naomi (Emma D’Arcy) and the next-door neighbour Rita (Anastasia Hille), and Alan and Claire (Zawe Ashton) have to come clean to the Deputy Head about their relationship (news of which has spread around town).

This series is so rich in characters that the plot is almost irrelevant. Payne builds them with such comic realism that they feel tangible, especially in the dialogue. The way the characters speak to one another is like watching a real conversation take place and Payne blends comedy into drama with such natural pace. At the start of the episode, the couples all decide to go on a night-out as a way of breaking the tension and getting on with each other. Payne’s dialogue is at its best in these cripplingly awkward moments, with hilarious misunderstandings and desperate grappling for conversation (‘I ran over a deer once.’ ‘Oh my god, where?’ ‘Mostly in the body but a bit in the head as well’).

This episode in particular shows an air of defiance. The community is conservative and middle-class, and the series itself has a tone of calmness – but Joy, Alan, Claire, and Marc (Dylan Edwards) turn into a group that’s lovably punky. It’s about individuality rather than following the crowd. Whatever the attitude to Joy and Alan’s situation, we can’t help but feel excited for them.

But as the other relationships grow into something more than just sex, as revealed in episode three, there is more of a temptation to love rather than to make love. Will this open marriage, once so perfect for the couple, prove to be their downfall? 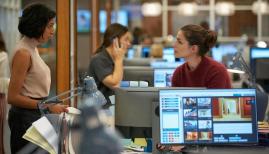 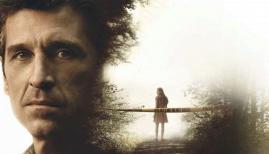 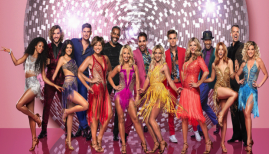