Jack Whitehall is the hapless Paul Pennyfeather in Evelyn Waugh's gloriously unromantic vision of life in a (terrible) public school, for BBC One

If only more of Evelyn Waugh's comedies had been adapted for TV, perhaps we would never have voted for Brexit.

Imagine if, instead of years of watching insipid women in corsets act out the olde-worlde glamour of British society, we had had more shows showing what a bunch of selfish eccentrics and queasy sycophants the British truly are. Surely then we'd all have voted for a sensible European to look after us.

Unfortunately, Waugh's most wonderful comedy, Decline and Fall, airing this Friday on the BBC, arrives a full nine months after the referendum vote. It may have come too late to save Brits from themselves, but then, as Paul Pennyfeather would be able to remind you, what else can you expect?

Set 10 years after the first world war, the story follows poor old earnest, middle-class Oxford undergraduate Pennyfeather, who, having been set upon by members of the Bollinger Club (no prizes for guessing what that's meant to be), is stripped of his clothes following a quiet evening of study, and promptly expelled from university for indecent behaviour. With his education in tatters and his inheritance stripped from him, Pennyfeather takes the only option available – he goes to work as a schoolmaster at an obscure public school in Wales, Llanabba, run by a bunch of very awful, very English, characters.

Jack Whitehall might seem like an odd choice to play our hapless protagonist. The British comic's mega-posh, loud-mouthed, foolish persona wouldn't have suited Pennyfeather at all, who is as straight as a good old English cane. But Whitehall plays it just right, offering a big flap of his dark eye-lashes every time disbelief and panic collides with his natural English reserve. 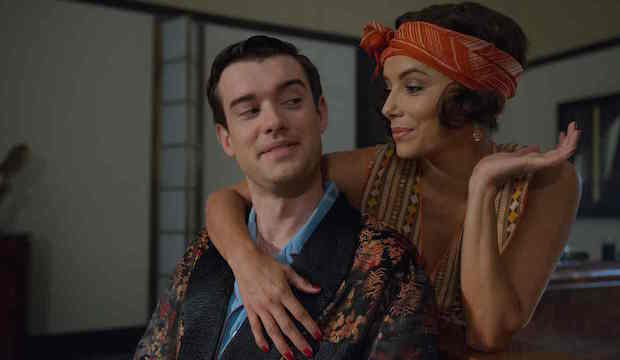 The rest of the cast has more scope to indulge in over-acting. Between them, Dr Fagan the headmaster (David Suchet), Captain Edgar Grimes (Douglas Hodge) and Margot Beste-Chetwynde, pronounced ‘Beast-Cheating’, (Eva Longoria) all get to be thoroughly, gloriously, marvellously awful in their many different ways.

Evelyn Waugh, revolted by, but also jealous of, the upper-class circle from which he was excluded, was only 24 when he wrote Decline and Fall. The novel was an inspired choice for Rev screenplay writer James Wood, and he perfectly translates Waugh’s understated humour and piercing understanding of Brits for the small screen.

If you don’t want to find yourself in the soup this Friday (and who does?) watch Decline and Fall on BBC One.