Gandini Juggling: The Marriage of Circus and Theatre 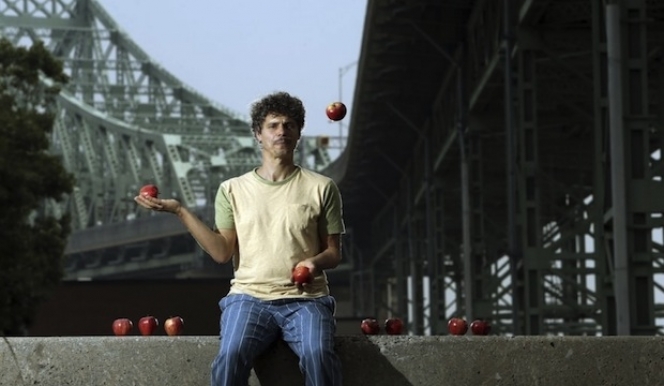 Sean Gandini
Just minutes into a conversation with Sean Gandini it becomes clear that the interview isn't going as planned. His quick-silver mind flits from subject to subject, effectively disrupting any carefully constructed sequence of questions.

This is actually in keeping with the topic that brought us together: Gandini Juggling’s Smashed, the show that opens this year’s London International Mime Festival, LIMF. It “challenges preconceptions” and “disrupts careful constellations of fruit,” says the programme.

Smashed is not a new show. It was created in 2010 and very favourably reviewed by Culture Whisper in a more recent outing; but for LIMF’s 40th anniversary edition, Gandini Juggling are presenting a specially enhanced production with more performers and a number of “surprises” on which Sean will not be drawn.

“This summer at a big European juggling gathering of 6,000 people we did a Smashed with 20 people.” Gandini explains. “And Helen [Lannaghan], who is one of the directors of the Mime Festival, knew that we were doing this, so she asked me for a kind of remix of the show, which is so exciting.”

Without wishing to spoil the surprise, we can tell you that it involves 17 performers, cartloads of apples and a lot of flying crockery; and that a structured performance gradually descends into chaos and mayhem (rather like my interview plan…).

And furthermore, that you will probably come out of the theatre feeling quite alive and with a lot to talk about.

In the 40 years since it started LIMF has gone from strength to strength and played a key role in widening the definition of mime from the narrow format of which Marcel Marceau was the greatest exponent to something more eclectic. Or, as Gandini puts it, “…an open window to the hybrids, the eccentrics, the misfits that don’t fit in anywhere.”

Unsurprisingly, then, Smashed is also an homage to another unique figure of European Theatre, one that doesn’t really fit into any preconceived moulds: the late great Pina Baush [1940-2009], founder and leading light of Tanztheater Wuppertal.

“Pina’s theatre-maker’s imagination is in our subconscious, I mean, she was indubitably one of the great theatre-makers of our generation.” Gandini is off on one his favourite subjects, “an obsession:”

“I like the moral ambiguity of her work, apart from the choreographic stuff which is something else. For example, the relationship between men and women that it’s not a simple… what do you call it….? a simple scenario like a lot of contemporary stuff wants to be.

“It isn’t black and white, it’s a complex thing with all kinds of complex power plays and I like that there are multiple readings. And I love Pina’s parades - I wanted to make a passing parade.”

Gandini confesses that for a long time he “had an anxiety that someone from the Pina Bausch company would come and say, ‘what are you doing?’” because he hadn’t asked permission to stage his homage.

He needn’t have worried, though.

“By coincidence we met Dominique Mercy of the Pina Bausch company in Paris [this past summer] at this wonderful festival called Paris Quartiers d’Été. (…) He was very generous, he came to see our show and left us a little note in our dressing room; and so I thought, why not ask him whether he’d be interested in being eyes, and he said that we didn’t need it, but that he wanted to hang out with us, and that’s one of the nicest things anyone has said!”

Dominique Mercy’s interest in the work of Gandini Juggling could be seen as an endorsement of juggling’s successful transition from simple circus craft and street entertainment to a legitimate form of theatre art.

It’s a transition in which Gandini Juggling have been instrumental.

“That was our intention all along. Because I have artistic parents (…) that’s the world that I kind of was interested in; (…) so when I started doing street shows (I did magic before juggling), I always thought, there’s another way of doing this and I didn’t know exactly what that was. And then meeting Kati…” 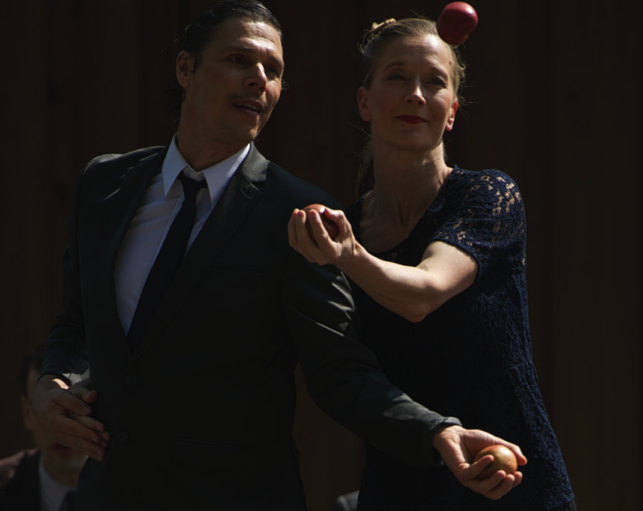 “She turned up in Covent Garden after a street show I was doing, picked up two clubs and started juggling them (he mimics some fast and fierce juggling) and I was like “Wow!” She used to come every Sunday and it went on from there.

“And it’s been good - I think we’re both quite eccentric people, we found a way of our eccentricities merging and tolerating each other.”

Together they formed Gandini Juggling in 1992 and have never stopped pushing the boundaries of the form. From beginnings which were “hard, because there wasn’t a lot of money,” Gandini Juggling has become a flourishing brand. At any given time there could be two, three or more Gandini Juggling companies performing simultaneously in different countries.

A man of many interests, 52-year-old Sean Gandini has long been been fascinated by the links between mathematics and juggling; his research into the subject has earned him a Wellcome Trust Award.

That, however, is in the fabric of the craft, something which is not necessarily apparent to general audiences. Something that is, however, very apparent indeed are Gandini Juggling’s forays into ballet and opera.

The Gandinis' love for the work of dance-makers such as Merce Cunningham, Trisha Brown and William Forsythe is, says Sean, “the stuff that’s fuelled us for years.”

And then with the support of the Royal Opera House they were able to create 4 X 4 Ephemeral Architectures for the 2015 LIMF. Bringing together four jugglers and four ballet dancers, with choreography by the Royal Ballet’s Ludovic Ondiviela, the piece was the harmonious marriage of two seemingly incompatible art forms: an unqualified success.

Gandini admits that in the juggling world ballet was “almost like a bad word;” but sees no reason why it should be so:

“I mean it’s a strange thing, high art and low art, you could go, ‘how presumptuous to say that throwing things could be like ballet;’ but ballet is really people wearing little stilts on their feet… so, you know, any art form can be filtered through a very low spectrum or a very high spectrum.”

And those who might have thought it presumptuous to mix ballet and juggling (and were proved so wrong by 4 X 4) would probably find the idea of mixing juggling and opera even more unspeakable. There, too, they would be proved wrong by Gandini Juggling’s participation in Phelim McDermott’s production of the Philip Glass’ opera that tells the story of the young Egyptian pharaoh, Akhnaten.

Premièred in London last Spring to critical acclaim, Akhnaten had a very successful run in Los Angeles in November, and may well be a keeper for the foreseeable future.

In fact, as Sean Gandini is keen to point out, “the earliest depiction of juggling was in hieroglyphics of the ancient Egyptians.”

It was “fantastic,” but not easy: “It was a learning process for me, because we’d been used to making things on our own terms, so if we make an one-hour piece we fill it with juggling, but here we couldn’t do three hours of juggling, so we had to learn to use the juggling to help what Phelim was trying to do.”

The collaboration worked and juggling became integral to the fabric of the opera, though Gandini admits with a mischievous laugh, “I could just get off on choreographing the structure of the music, but that’s something else.”

Projects for the future include work with the Bharatanatyam dancer Seeta Patel - yet another boundary crossed; a collaboration with the exciting young choreographer Alexander Whitley; and Gandini still hopes William Forsythe will agree to a joint project.

“It’s been an amazing year, we’ve been to something like 30 countries; Akhnaten was a fantastic high point (…) The Smashed in Paris was extraordinary as well; and then we did 4 X 4 with a string orchestra in Switzerland and that was also great.

“So it’s been a year of treats - I sometimes think we are spoiled because not everybody does what they like doing, and I feel like I have to pinch myself sometimes.”

Gandini’s modesty is one of his many appealing characteristics, all the more so because he has very little to be modest about… We can only look forward to the next phase of Gandini Juggling. And the next.

The book Juggling Trajectories by Thomas JM Wilson, ed Gandini Press is a lavishly illustrated history of the company £30