As a child he begged his parents to play an opera video. Now Gerard Jones is directing a production for the Royal Opera House 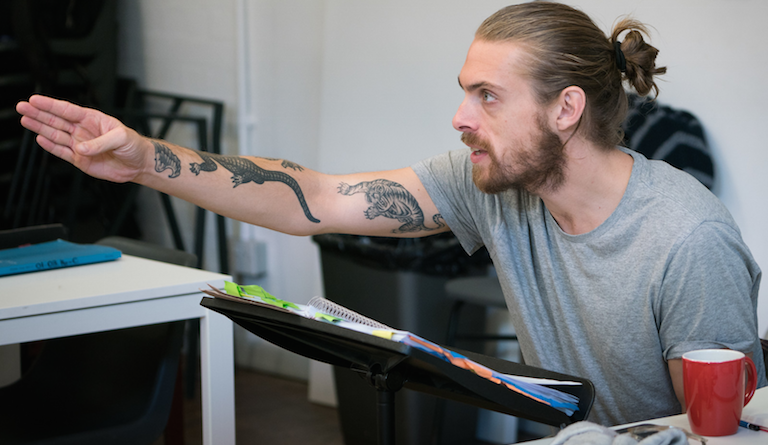 Gerard Jones directs rising new stars for the Royal Opera House. Photograph: Roger Way
The opera director Gerard Jones is someone you would like to do your packing. Or maybe he could have been a detective, or thought up the perfect crime. He has a forensic attention to detail, and that includes considering from every angle what a character does, why they behave as they do, and what are the practical implications from moment to moment.

So, for a murderous scene in his current work on the Royal Opera House’s new production of Handel’s Oreste, he is thinking on gruesome lines. He needs bin bags. And plastic sheeting. And an assassin who is driven not so much by hatred as by the need to earn enough for a nicely appointed home for life with his adored Ifigenia.

In rehearsal at Wilton’s Music Hall, which will be staging an ROH production for the first time, he explained to Culture Whisper how he went from grammar school in Kent to become singled out by Covent Garden as a promising new director, and who has already worked in opera houses around the world.

"My parents were not at all musical,” he says. "But at home in Kent there was an 80s, aspirational VHS video of Così Fan Tutte and my brother Oliver and I begged them to get it down and put it on and we couldn’t believe that there were these women in big frocks singing …. Then I went in 1990, when I was seven, to see The Marriage of Figaro at English National Opera – it cost £2.50 – then Don Giovanni, and then I saw a production directed by Richard Jones, and that made me think, 'This is the way to do it.'

"I asked my father to take me to see Richard Jones's Götterdämmerung at Covent Garden – I was 12 – and he missed the first act which was two and a half hours long, and I sat there alone, on the edge of my seat.” And, 20 years on, he reels off the names of the top singers who starred on that occasion, effortlessly demonstrating an encyclopedic knowledge that would be impressive in someone who had been in the business twice as long.

Richard Jones, for decades among the foremost directors of opera, has had his share of hits and misses, but no serious opera-lover would miss his next turn. The fact that the Joneses shared both first and second name, until Gerard began recently to work under this, his middle name, helped bring them together.

“I realised that you didn’t have to be called something like Franco Zefferelli to be a director: you could have a normal name like Richard Jones and make it. And I also realised that the visual side of opera could be so audacious: you could have Brünnhilde with a paper bag on her head, which is what Jones did.”

But whatever the visual impact, the opera starts with the music: “As the director you turn to the music for ideas about what to do with it. And the conductor has to work from the text. Otherwise you are both just playing to your strengths.”

An accomplished clarinettist himself, Gerard thought as a teenager that he would go into professional music-making as an instrumentalist. “I didn’t realise that you could be a director. I assumed I would go to music college, but I had a lesson with a consultant and they said don’t bother - you’re rubbish!” You doubt that he was rubbish, but it was definitely a turning point for him.

Gerard studied Italian and German instead, at University College London – languages that serve him well in his directing career now – and for some time fell away from music. “Then in my third year in Italy I was so moved by hearing a Tchaikovsky symphony in Florence that it made me cry.” Returning to London to finish his degree, he took an evening job front-of-house at the Royal Opera House, and saw six or eight productions a week.

“We all used the same canteen, and I was in a lift with Richard Jones and I told him I was a massive fan, and he saw my name badge and saw that my name was the same as his.” A friendship began, and Jones suggested that Gerard assist on productions, and that he start by observing. Encouraged by the Royal Opera House, he sat in for all the rehearsals for a revival of Jonathan Miller’s marvellous Così Fan Tutte, then for Cenerentola, and by 2008 he was working at the ROH with David Alden on the Cavalli opera La Calisto.

“Thank God it was just in the time before budgets were tightened and the Royal Opera House could give you a really low-paid but proper job!”

After that, the jobs as assistant director came thick and fast, as his reputation for both vision and dependability spread through other companies. In the same year he did his first job at Grange Park, assisting on Dvorak’s Rusalka, and in 2009 he assisted his mentor Richard Jones for the first time, on Falstaff at Glyndebourne.

With dozens of jobs notched up or in the pipeline, in opera houses in France, Italy, Germany, Russia and in New York, the ROH went a step further, and selected Gerard for its Jette Parker Young Artists scheme, which grooms the new stars of opera in Britain.

And that is why he now has his own show at Wilton’s, but it is very much a company affair: that is how he works, something he learned from Richard Jones. “At the end of the run-through everyone listens to the notes for everyone else. It makes you into a group. We had two weeks in rehearsal rooms in Bethnal Green, and now we are running the show 10 times.

"Really great art is circular: it’s only when you get to the end of something that you realise what the beginning means.” Working as a team also keeps the production mobile: "It’s like an unset jelly, and you don’t want it to set before everything is ready."

In the case of Oreste, a so-called pasticcio opera that contains elements of Handel’s previous successes, the story is punctuated with hit arias. With these solid cornerstones in place, Gerard goes back to the story's orginal author, Euripedes – “his characters are ordinary people in extraordinary situations, people you can recognise from the back to the audience" – and also has one eye on a Joe Orton farce. There may not be women singing in big frocks but there are six characters on stage pretty much all of the time. “You have to keep six cogent psychological ideas going."

Oreste has highly topical resonances now. The story of Ifigenia in Tauris may date from the fifth century BC, but the picture of an island that automatically rejects all foreign arrivals should make a British audience uncomfortable today.

“They are such amoral people!” exclaims Gerard of the cruel king Torante and those who do his bidding, notably the driven Filotete, who ultimately helps Ifigenia secure the life of her long-lost brother Oreste when he washes up in this hostile land. Gerard is fascinated by the appeal to audience of “baddies” like Torante. “If they are technically brilliant, there’s a part of you should be disappointed when the baddies are overthrown.”

Perhaps this is why opera appeals to children, who delight in mischief at all levels. Gerard is not alone in having been exposed to opera at an early age, and the Royal Opera House has many projects that introduce school age children to new work and classics, with huge success.

How to introduce your own young to the art form? “Don’t apologise for opera,” says Gerard. “Don’t cover the vegetables with sugar – the thing itself is worth trying. It’s as exciting as Game of Thrones, and all the other things that people are in to.

“You can see for miles from the opera air balloon.”