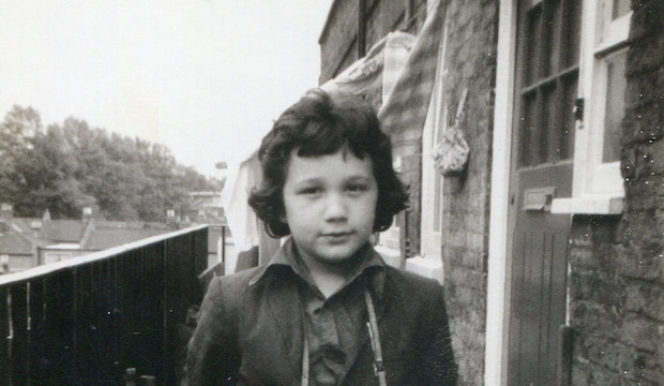 Michael Volpe growing up in London; image from Noisy at the Wrong Times.
‘Culture isn’t just something nice’ says Opera Holland Park founder Michael Volpe. In fact, 'when culture touches a kid, it has a more profound effect on them than, say, understanding photosynthesis’. Talking summer season highlights and accessibility, it's clear that Volpe is impassioned by the value of cultural engagement: ‘we just need to make the extraordinary ordinary’!

Noisy at the Wrong Times

‘I never envisaged myself as an author’, Volpe admits. But on meeting it’s clear that he’s a natural, witty raconteur. And he’s got quite the story to tell: part rags to riches (from Inner City to Opera House, the blurb announces) and part family record, Noisy at the Wrong Times is a moving tale of “bad boy done good” and a jubilant fingers up to those that think culture and success are the domain of entitled upper classes.

In fact, it was never meant to be a memoir. The book ‘began as an essay for the Woolverstone Old Boys website’, Volpe explains. This school, described in the forward to the book as ‘a miracle of educational courage and foresight’, broke conventions and class barriers to ‘give an Eton-style education to bright working class inner city kids’, and Volpe had lots to say in its praise and of his own experiences there.

Looking back at his old school report card, he grimaces ‘all the trouble I got myself into’, Volpe realized that in order to really capture what was special about the school, he must explain the disadvantaged backgrounds of its students.

And so the writing exercise ‘burgeoned into a stream of consciousness’ and grew into a bigger story about social mobility enabled by this top class education and catalysed by Volpe’s determination. The school ‘didn’t say you can be the best… you ARE the best’ and it ‘changed the perceptions of ourselves that we had.’

‘It’s happened in one generation: mum had a proper pauper existence and my daughter has just graduated from Oxford’, he says with a glow of pride.

Still though he ‘never felt the book would have a conclusion’. But he is candid about how the deaths of both parents and his brother within 18 months of each other has sharpened his perspective on the past. The book became ‘a family record’ and mourning his mother ‘threw into sharp relief’ the very heart of the story: ‘mum represented a struggle’.

This harrowing experience is infused with nobility as Volpe writes in a tear-jerking eulogy at the end of the book: ‘If only you could have seen all that we have achieved, what your grandchildren have attained and what they have become. They will never know the hardships you knew, because you suffered them for us’.

The shining success at the end of this struggle, and proof that education can propel people beyond the limitations of their upbringing is Volpe himself. Opera Holland Park is renowned not just as a highlight of the season, but also for showcasing emerging talents alongside the best in the business. He even won a Who's Who entry for founding Opera Holland Park Festival.

We were curious whether, as an inner city working class immigrant, he had faced snobbery or elitism. ‘Not at all’ he insists, ‘it’s meritocratic; it doesn’t matter who you are, if you have talent, you’ll be hired in this world’.

This confidence in talent was something he learned at school: ‘no social passport is required’.

But do you need a certain type of education? Opera can be an intimidating art form. ‘There are two different responses to opera: the intellectual and the visceral’ Volpe argues, animated in his belief that this human reaction transcends class, upbringing and education. ‘The relationship between music and drama is intrinsic – from film to football – and the concept of opera is about as emotionally manipulative as it gets…’

‘You can intellectualise opera, but you don’t need to… part of the problem of expanding the audience is our own resistance to trying, and the force of stereotypes’.

And having set up the INSPIRE project, which gives people access to the Opera Holland Park season for just £17 a show, Volpe’s not taking financial restrictions as an excuse. Even discounting subsidised, affordable tickets, ‘the average ticket price in opera is less than football’.

So forget class or education -- to encourage boarder cultural engagement you just need to demystify art for the next generation. This year Alice’s Adventures in Wonderland is returning once again and proving to be just as successful for Opera Holland Park as Fantastic Mr Fox before it.

Volpe says there’s always plans to develop new family opera, but, he’s also vociferous about opera’s capacity to engage children (at just six, his youngest daughter thinks nothing of listening to arias, and has a distinct sense of what she does and doesn’t like). All shows in the season have free tickets for children age seven to 18. More than just a gimmick, the initiative was introduced to encourage parents to expose their children and break down the idea that classic music is too highbrow for children.

Leighton House Museum. I worked there for 20 years so I know it really well but am still impressed by the relentless perfection. I’m very stimulated by visual things.

What events/exhibitions/shows are you excited about this year?

Tritico – one of the best nights of theatre

There’s nowhere in Hammersmith! My favourite restaurant is in Florence but in London I think it would be Bocca de Lupo in Soho. It’s modern Italian food

Cultural figure you most admire?

That’s tricky. I think Antonio Pappano. He’s done great things as music director of Royal Opera and he’s made a lot of friends along the way.

Noisy at the Wrong Times is published by Troubadour and is available to buy here.

Opera Holland Park summer season is open! Click here for our full guide of what to book and when