It may not be as shocking or searing as when it premiered in 1999 but this Donmar Warehouse Closer revival still sizzles, says Lucy Brooks 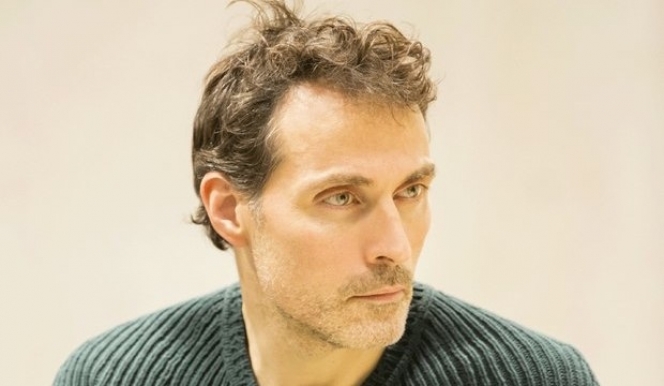 Rufus Sewell in rehearsal for Closer; photo by Johan Persson
In internet-saturated 2015, where expletives and obscenities have lost the power to shock, Patrick Marber's script is inevitably less fresh than when it premiered in 1999. But Closer is in no way stale. The distinctive brand of out-to-shock, in-yer-face theatre packs a different punch sixteen years after it first sent shockwaves on stage; a faux pornographic chatroom dialogue, or sleazy strip club scene won't elicit a gasp anymore. But the humour and crushing honesty haven't dulled with time.

The sometimes violent, sometimes casual use of the C word, may have a stronger stage precedent now, but the way in which Marber creates moments of arresting poetry from such ugly language is still unparalleled in theatre. It reminds instead of the poet Philip Larkin in its devastating dysphemism. Instead of dated, the shows feels nostalgic. After a real meeting is prompted, albeit vicariously, through a virtual encounter, Anna (Nancy Caroll) refers to the vast connections offered by the world wide web. To us now this is facile, but it works to show how quickly interactions have been changed by the internet.

Want to know what's on at The Donmar Warehouse? Click here to read our previews for the Donmar Warehouse 2015 Season
Aside from the specifics of time and place, the humanity and emotion of the plot is just as resonant.  This tale of the most tangled and torrid love affairs imaginable cuts deeper than the standard love triangle -- or in this case, square -- and the situations still spark with humour and stab with sadness. We follow two couples from the first encounter, full of fizz and promise, through to the fraught final meetings. While the vividness of these relationships comes from the base, brutal focus on sex, an over-arching exposure of love and loss and futility is subtly handled. The Donmar Warehouse production is pacy and slickly staged, with abrupt shifts between each couple often leaving the parallel partners on stage, reminding exactly how intwined these four people are.

Closer is always going to make for gripping viewing, and the kind of drama that the theatre is made for. The film adaptation haunts the stage show -- there's an obvious resemblance between this revival cast and their Hollywood predecessors -- but there's also an intensity and blackness that's borne of the immediacy of live performance, and the quality of the performers.

Rufus Sewell deftly maintains a well-deserved heartthrob status. But with within the charm he also exposes Larry the Dermotolagist as a brute, negotiating the line between machismo and vulnerability seamlessly. Wry and softly-spoken, Sewell has the audience hanging off every word. So, when he lets rip, whether it's bitter insults or heart-wrenching sobs, the effect is spine-tingling. Oliver Chris as intense writer Daniel delivers quips with sarcasm and warmth and strikes a sizzling chemistry with Nancy Carroll as an elegant Anna. They make the instant and obsessive romance not just convincing, but also compelling. For a fresh drama school graduate, starring alongside such experienced and accomplished stage actors is daunting, plus the role of Alice was so exquisitely immortalised on film by Natalie Portman. The nerves did show in Rachel Redford's performance. While her fresh-faced youth is spot on, it took her a while to warm up to the charisma that defines the character. We saw Closer on its opening night, so we look forward to seeing how this promising young actress thaws and relaxes into the role.