REVIEW: Zinnie Harris' new play, How to Hold Your Breath, opens at the Royal Court 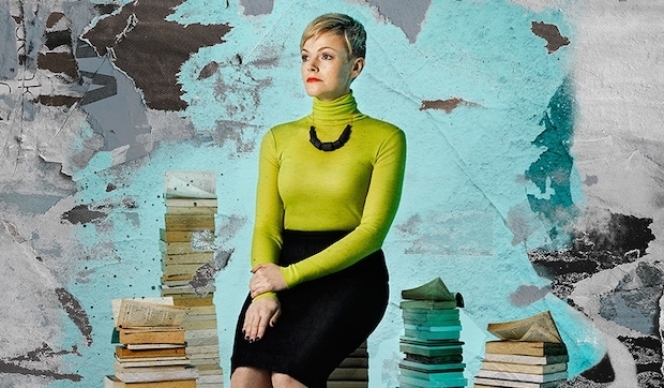 Maxine Peak in How to Hold Your Breath
Zinnie Harris' plays have built a reputation for tackling timely issues in a brave way. Author of The Wheel, Zinnie Harris first worked with Royal Court artistic director Vicky Featherstone at National Theatre Scotland in 2011. The pair have teamed up again with a comparably weighty play, How to Hold Your Breath, to the Jerwood downstairs at the Royal Court.

Zinnie Harris Royal Court return
How to Hold Your Breath is a great success. A Lyrically rich, ferocious and unmerciful attack upon Western civilisation, the story is told through the experiences of two sisters, Dana - (actress Maxine Peake) - and Jasmine (Christine Bottomley) as they attempt to escape a disintegrating Europe.

With impressive artistry, Harris uses a seemingly innocent encounter to wrench upon concepts of modern day morality. Ideas on immigration are turned on their head, as the characters look for aid and support from countries south of Europe. In a similar vein to Harris' previous Royal Court production, Nightingale and Chase, women are at the heart of her story with Dana and Jasmine as representatives for generations of forgotten voices. Throughout the unfolding horror of their journey sharp wit sparks aside melancholic monologues.

As with many of Harris' plays gender plays a significant role. With the notable exception of the Librarian (Peter Frobes), in this play male characters are less convincing, sometimes bordering on clichés and rarely allowed to come into their own. A scene in which the protagonist sells her body laboured a point already brought home. The weight of the message is negated by obvious masculine tropes. Such masculinity dismantles the magic of the world which the production had hitherto created.

How to Hold Your Breath cast

Harris places her protagonist in an Odyssean role as she traverses the storms brewing in European society. Maxine Peake, Hamlet Star and no stranger to leading roles, commands this position with ease. Strong support comes from Christine Bottomley, whose delivery of a monologue about the death of her child is awful and mesmerising,

Artistic director Vicky Featherstone adeptly unpacks the themes of the play, with eloquent staging and powerful visual reminders to emphasise the horror of the character's changing world, a world which literally shakes and disappears underneath their feet. Under Featherstone's guidance the audience easily experiences the Heart of Darkness lurking beneath the veneer of civilisation, brought home magnificently through a powerful ensemble piece towards the end of the play.

Imaginative and pulsing with energy How to Hold Your Breath is an insightful and powerful play that depicts a dystopian vision of the modern world. The play is propelled with momentum and urgency -- as if the people so often forced to hold their breath and keep quiet were finally allowed to speak out with a veritable roar.

How to Hold Your Breath