Fun, feisty and refreshingly feminist, Almodóvar's film fizzes on stage, but some of the hysteria and heartbreak feels a little hollow, writes Lucy Brooks 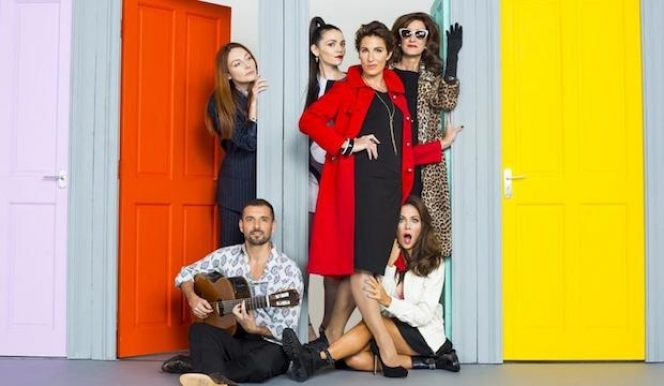 Culture Whisper review: Women on the Verge, Playhouse Theatre ⭑⭑⭑⭒⭒
'It's a weird show for the West End' admit composer David Yazbek and writer Jeffery Lane. And this is perhaps an understatement. Women on the Verge of a Nervous Breakdown, the cult comedy from Spanish director Pedro Almodóvar, is bold, bizarre material for a new musical and the mighty Tamsin Greig (Black Books and Green Wing star) certainly chose a challenge for her first foray into musical theatre.

Its Broadway premiere was on the verge of too weird. Jeffery Lane is candid about the underwhelming reaction and disappointment of the Broadway premiere in 2010. Much of this he attributes to the intricacy and ambition of a vast set, including crowds of actors on treadmills and projections of Madrid, which distracted and drowned the story.

So this reworked West End version is pared down to a minimalist elegance with an expanded, less elliptical script. The film's quirky aesthetic fizzes through the show, with bursts of brightness and chic costumes, but some of the hysteria and humour feels flimsy on stage. And as the plot dissolves into farce, it lacks the manic pace to make it more than slapstick, despite valiant attempts by the cast to keep the humour afloat. As it's still in previews, we hope that in a few more runs the rhythms and cadences of the chase scene will fall into place.

As we expected from masterful comic actress Tamsin Greig, Pepa is made raw, warm and relatable. The quotidian trials of zipping up a dress, taking off a coat and putting on high heels are made hilariously overwhelming, imbuing shredded nerves into every action without an ounce of over-performance. But, as a newcomer to musicals, it was Greig's voice that really surprised us. A slightly pitchy start mellowed to show a strongly expressive voice, well-suited to the Flamenco flavour of the score. Her reflective solo 'Island' where Pepa mourns her failed love affair, asking 'Where Did it Go?' was performed with enough tenderness to raise a tear.

The strong female characters for which Almodóvar is famed were done justice with an impressively talented supporting female cast. Anna Skellern succeeded in avoiding clichés of ditzy models by bringing plenty of charm and sincerity to her charter Candella -- and the breathless 'Model Behaviour', a mad musical monologue of voicemails was exhilarating to watch. Haydn Gwynne's Lucia was brilliantly brittle and deftly derided the stigmas against women 'of a certain age' by refusing to be invisible.

Disappointingly, the foundation of the story -- all the heartache and mania -- was undermined by the man who is meant to have caused the madness. While the sympathy and affection you feel for the play's women means that the mythical Ivan, when he finally appears, will always be met with suspicion, Jerome Pradon's performance lacked the necessary charm and charisma. As a sleazy philanderer he was convincing, but there was no sizzle or spark that made us understand why three women were head-over-heels for him, making the whole failed romance plot a little hollow.

It is the refreshing representation of emotions that makes this musical a joy -- and the essence of this comes from Almodóvar. Nevertheless, Women on the Verge stands strong on stage as a celebration of women who are as feisty as they are fragile, silly and serious simultaneously and, crucially, fulfilled without a man by their side in the final scene. And the poignant tonal shift of the last song, as all the sass subsides to soulful a'cappella, proves that you don't need to have belting male voices in the chorus to end a musical on a powerful, uplifting note.

Woman on the Verge