The production endeavours to replicate practices of ancient Greek drama. As per Greek tradition, a ritual offering given by a distinguished member of the community begins the play. The casting also reflects ancient Greek conventions: two or three professional actors and musicians are accompanied by a local chorus, recruited and trained for the specific city. Here, the chorus of the Danaids are young women from Lambeth and Southwark, with varying degrees of performance experience. The citizens of Argos too are local members of the community. 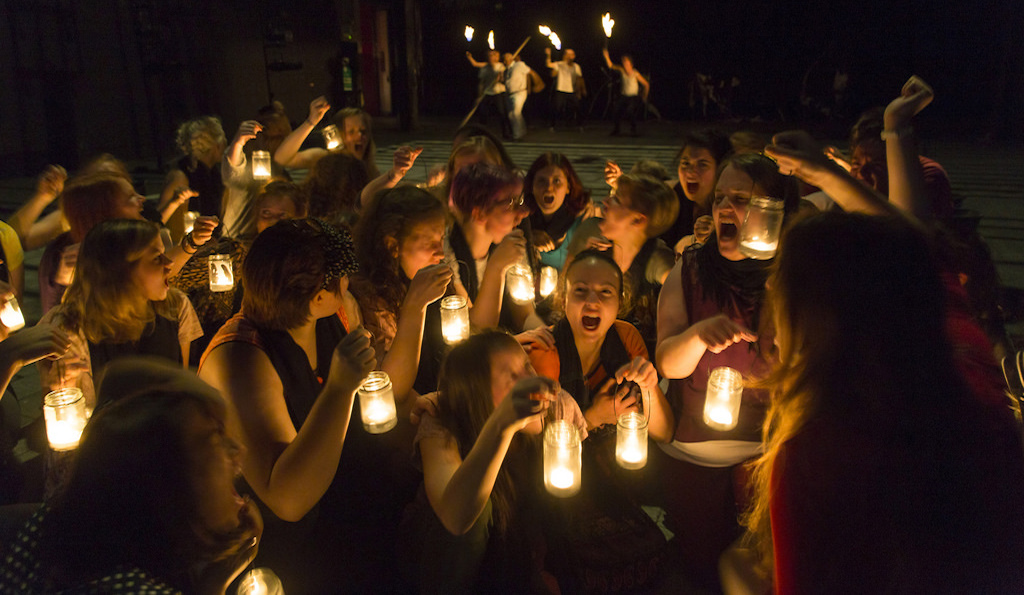 Yet while echoing ancient theatre rituals, The Suppliant Women also speaks quite powerfully to our modern era. Issues of migration, refugees, and women’s rights reverberate in Greig’s adaptation. Voiced by a diverse and cohesive chorus of young women, there is a real poignancy and potency to the text.

King Pelasgos of Argos (Oscar Batterham) is dressed in a contemporary grey suit, suggestive of a modern day British politician. Apart from providing some nice comic relief, he emblematizes the political unease and indecision regarding issues of asylum.

But it is the chorus who are the real spirit of this production, creating beautiful image after beautiful image on the stone stage. A feat in ensemble work and with Gemma May as Chorus Leader, they move, speak, and sing as one unit. Yet each has their own individual voice, and together they create a rich and layered visual and aural world. Perhaps the most stunning moment is when they tell the story of Io and Epaphus, using sand and song to describe their ancestral heritage. So compelling are they that the addition of other characters, particularly the citizens of Argos, slightly deflate the energy onstage.

Still, The Suppliant Women is a demonstration of how theatre can successfully engage community to create thought-provoking, relevant, and beautiful storytelling. On only until the 25th November at the Young Vic, it is a show to see.