The Open House, Print Room Theatre at the Coronet

After grabbing critics' attention with his award-winning debut play The Realistic Joneses, Eno has swiftly become one America's most engaging and interesting young writers, and this latest play explores contemporary ideas of malaise and toxicity through the traditions of family drama.

The Open House opened Off-Broadway in 2014, where it won a Lucille Lortel Award for Outstanding Play and was hailed as one of the Top Ten Plays of the year by TIME and Time Out magazines. Now, after a successful UK premiere at Bath's Ustinov Studio Theatre, the play transfers to The Print Room, with former artistic director of the Royal Shakespeare Company Michael Boyd directing.

The play follows a nameless Son and Daughter, who return to the family home to celebrate their parents' wedding anniversary. But the atmosphere is anything by celebratory. Tensions run high, interactions turns increasingly absurd and the pet dog has disappeared. The slippery plot is shot through with acidic comedy, capturing the stagnation of this unhappy family and ending with a dramatic twist.

Stage regular Greg Hicks, who was highly praised for his performance at the Ustinov Theatre, returns to play the cantankerous father oppostite Teresa Banham (Dr Who) as the mother.

The Open House, Print Room Theatre at the Co 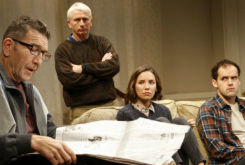 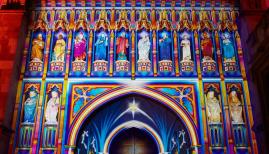