In the play world of Christopher Hampton's 1970 comedy The Philanthropist those experts bumble around in a university bubble, fretting over relationships, logic puzzles and philosophical quandaries, oblivious to the assassination and murder besetting the 'real world'. Riffing on Molière's The Misanthrope, the play explores 24 hours in a university town, centring on the lives of young academics while politicians are in peril.

It's an all-too resonant comedic backdrop, which is set to chime with our own bourgeois crisis in this new production directed by Simon Callow. As bona fide Shakespearean, as actor, writer and director, Callow is a seasoned thespian and the perfect choice for the job.

'The play was really about Christopher Hampton's contemporaries,' says Callow of The Philanthropist, 'but neither then, nor ever since, has it been cast at the right age. I'm very excited, not only to be doing the play, which I think one of the funniest, sharpest plays in the English language, but to be doing it with a group of brilliantly witty and original young actors who will reveal the play as it's never been seen before.' 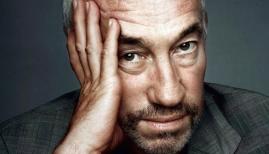 Interview, Simon Callow: 'Shakespeare provided us with the best account of what it is to be human'

Breaking Bad's Bryan Cranston to star at the National Theatre
1