An enchanting production of The Lion, the Witch and the Wardrobe comes to The Bridge Theatre for the festive season

The Guardian praised the pared-back production: 'Cookson and her company remind us that theatre itself is a sort of magic and that imagination is more powerful than the flashiest technology'; while The Times enthused about an 'eye-popping, revelatory' and 'astonishing' show.

Rather than a straight adaptation, this stage version was devised and conjured by the company during the rehearsal process. Designer Rae Smith (War Horse) suspends disbelief and takes audiences into an icy wonderland full of mystical beasts and strange creatures. Instead of relying on special effects and CGI, the show champions a more traditional imaginative approach.

The fantasy begins in wartime Britain, where siblings Lucy, Edmund, Susan and Peter have been evacuated to the countryside to escape the Blitz. But when Lucy discovers a whole new world at the back of wardrobe, the children begin an adventure that includes a talking faun, a friendly beaver, a wicked witch and a truly heroic lion.

If the reviews from Leeds are to be believed, this take on The Lion, the Witch and the Wardrobe will be a festive highlight for all the family.

Tickets for The Lion, the Witch and the Wardrobe at Bridge Theatre are now on sale.Click here to book.

The Lion, the Witch and the Wardrobe 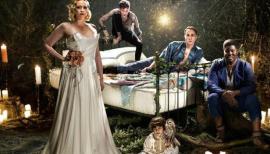