But first, a warning – traditionalists may not like it. Rice’s light-hearted and even irreverent production is set in the late 1970s. Sebastian and Viola’s journey begins on the SS Unity, where their disco dancing to Sister Sledge’s We Are Family is cut short by a severe storm. Illyria is a Scottish Isle, infused with kilts, late 1970s fashion, and Feste the fool is played by the exquisite cabaret drag icon Le Gateau Chocolat.

Rice makes full use of the era with references to disco, funk and even punk to establish a world that is at once distant yet familiar, both nostalgic and new. Joshua Lacey’s Orsino, a hilarious sort of machismo Scottish-dancer/rocker, makes a catchy rock ballad of ‘If music be the food of love, play on’ – later ringing out from a cassette player. Music is the main current in this production, yet sometimes its usage goes overboard, verging on a slightly sugary pop adaptation of Shakespeare. 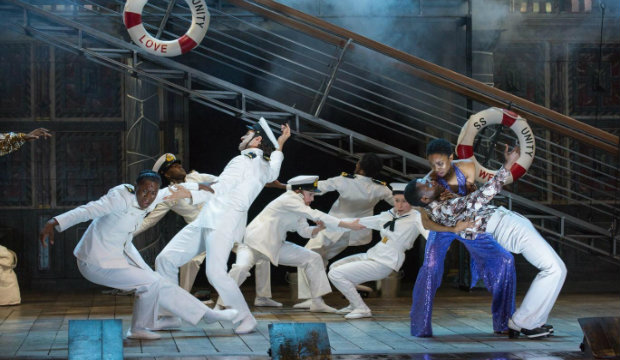 Le Gateau Chocolat wears a gold sequin kaftan and beguiles with song throughout, a fresh and highly entertaining Feste. Both Anita-Joy Uwajeh and John Pfumojena as Viola and Sebastian are strong and endearing, with Pfumojena able to fully deploy his remarkable vocal talent.

But it’s Katy Owen as Malvolio who really steals the show. Short and suited with slicked back hair, she sprints about the stage with pompous agility, sharp voice and strict demeanour. This Malvolio straddles the line beautifully between being endlessly obnoxious and equally loveable, and is remarkable.

As her last directorial endeavour at the Globe, Rice’s Twelfth Night is delightful and enchanting, even if it is not a transformative or revolutionary adaptation. More than anything, she focuses on making Shakespeare highly entertaining, accessible, joyful and communal.