The Goat, or Who is Sylvia? Theatre Royal Haymarket review ★★★★★

A mysterious love affair, a goat and Damian Lewis. London West End plays don't come much more intriguing than that

Edward Albee riffed on this semantic oddity in his surreal, shrewd 2002 play The Goat or Who is Sylvia?, which now crackles with life in a crisp revival by director Ian Rickson.

Damian Lewis is virtuosic as middle-aged architect Martin – the successful, fulfilled, happily-married man who falls in love with a goat (which he names Sylvia). The upheaval affects every last movement; simple acts such as crossing his legs or taking off spectacles become comically stilted. His professions of spiritual and sexual love for a farmyard animal

Sophie Okonedo, as wife Stevie, is a torrent of emotions – baffled, to say the least, by this bestial betrayal. Her anger erupts in animalistic howls.

Caught somewhere in the middle and sent to cry quietly in his bedroom, their son Billy (Archie Madekwe). Having come to terms with his own homosexuality, he now must get his head around having a ‘goat-f**ker’ for a father. 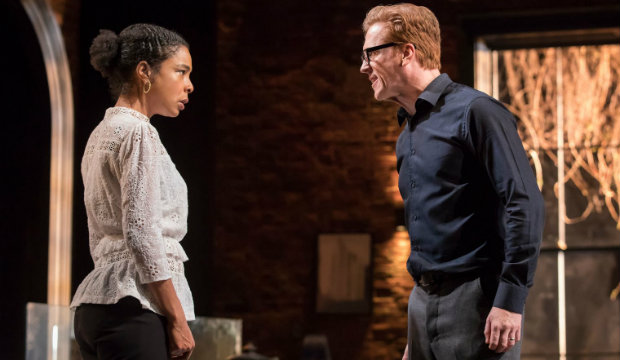 Sophie Okonedo and Damian Lewis: The Goat or Who is Sylvia. Photo by Johan Persson

Lewis and Okonedo race through the rat-a-tat, stinging dialogue in a veritable variety show of accents, affectations and semantic pedantry. The surreal spirit that unsettles in Albee’s early 1960s masterpiece Who’s Afraid of Virginia Woolf? has morphed into a monster.

The unrelenting absurdity is divisive. Some people spent the one hour and 40 minutes howling with laughter; after an initial titter over a seductive goat called Sylvia, we remained coolly unnerved. Like a surrealist painting, the implications and intentions behind the artwork matter more that what you actually see. There's no denying the wit and originality of structure and language in this play, nor the shining talent in this revival – but it can still be an ordeal to watch. Some will relish this; others will leave a little queasy.

Albee grasps at the utterly unpalatable to comment on the flimsiness of such judgements. It’s a story that uses modern taboo to re-create and re-appropriate the horror so intrinsic to classical tragedy. The question in the title – Who is Sylvia? – invites you to consider the allegory beneath the 'man shags goat' plot.

Whether you consider the bestiality as a metaphor for the playwright's own experience of sexuality or a broader examination of taboo, The Goat or Who is Sylvia? still feels bracingly new.