These citizens of Verona run on and off stage in their trainers and athletic wear. Whyman creates a sense of youthfulness and urgency, and it might even feel fresh were it not for the otherwise barren stage, with rusted metal exterior, a central platform, and a movable staircase. The space feels inert in comparison to the liveliness of the actors; this fair Verona seems strangely incoherent. 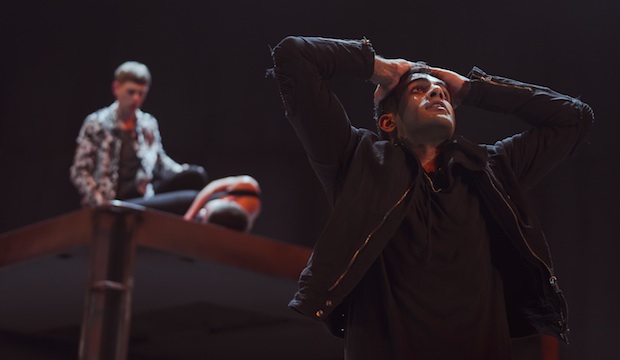 There are some nice additions that reinvent the classic tale, including Charlotte Josephine’s hyperactive Mercutio and Josh Finan’s Benvolio, whose love for Romeo adds another tragic aspect to the tragedy. Yet the quarrel between the houses feels understated, and although there’s an attempt to underline the senselessness of the deaths in Whyman’s production, the intense hatred between the two families is never really foregrounded. The deaths of Mercutio and Tybalt (Raphael Sowole) are particularly unmoving, which then halts the rapid-fire turn of events which leads to Romeo and Juliet's deaths.

The parents of the houses of Montagu and Capulet fade into the background, while the sweet if not sanitized love between Karen Fishwick’s Juliet and Bally Gill’s Romeo rises to the surface. Ishia Bennison’s Nurse is also a joy to watch; only when she enters to find both lovers dead in the Capulet crypt is the tragic impact really felt.

While perhaps not the most poignant of heart-breaking of productions, this Romeo and Juliet is still serviceable, with Gill and Fishwick succeeding in making the lovers both endearing and infuriating, juvenile and wise, heroic and tragic. If you miss it at the Barbican (it finishes on 19 January), don't fret: the production will then do a national tour.

by By Brendan Macdonald