Since opening on Broadway in 2011, the shows has spread across four continents and entertained over 7.2 million people. It's been impressing at London's Prince Edward Theatre since 2016.

The spirited story of the nineties cartoon and hit songs including ‘Arabian Nights’, ‘A Whole New World’ and ‘Prince Ali’ translate neatly to the stage.

Our little reviewer was agog: ‘I think it must actually have magic,’ she whispered as the lovers glided through the air. But there are enough sharp gags for grown-ups, too. 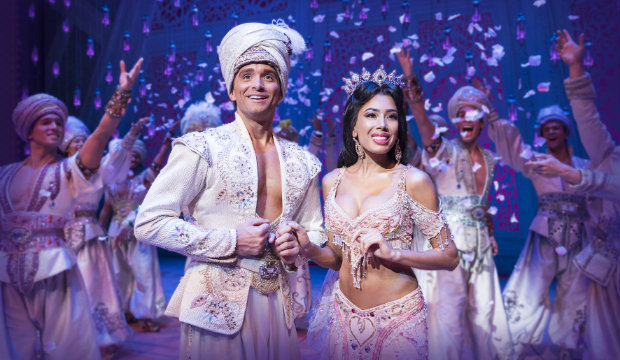 Street Rat Aladdin, played with charm and chiseled pecs by Matthew Croke is a lovable rogue, getting into scraps and secretly longing to make his dead parents proud.

Meanwhile, locked up within the palace walls, smart, sassy and stubborn Princess Jasmine is reminding us why she’s our favourite Disney princess. Former Sugerbabe Jade Ewen has all the little girls in the theatre misty-eyed with hero worship, and is vocally very impressive.

But without a doubt it’s the mighty talent of Trevor Dion Nicholas as a rambunctious Geni who elevates this from a cheesy kids’ show to an exhilarating and utterly entertaining experience for audiences of all ages.

Much like in the cartoon, where Robin Williams amped up the comedy, this Geni is a true showman. And his big number ‘Friend Like Me’ is a showstopper. Over eight and a half minutes, he radiates star power, rampaging across the stage, improvising oh-so-fresh comic references, all while maintaining stonking vocals. 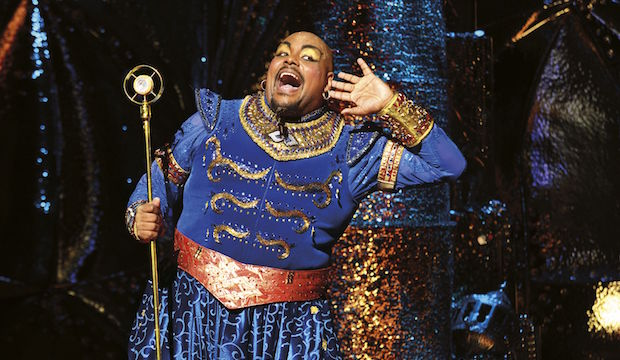 Mostly, the comedy is panto-style punning and there’s not much subtlety in the show. The Arabic origins are limited to the odd turban and the inhabitants of Agrabah speak with an American accent (despite a predominantly British cast). Substantial drama this is not, but it sure is entertaining.