Eugenius!, The Other Palace Theatre

Then this irreverent new musical impressed at its proper premiere at Andrew Lloyd Webber's The Other Palace Theatre. Now Eugenius! returns for a second run this September.

Co-produced by Warwick Davis (of Star Wars and Harry Potter fame), the musical comedy tells the story of Eugene, a teenager who dreams up a Hollywood movie.

Writers Chris Wilkins and Ben Adams (from boyband A1) create a fun, lively show that explores what it means to grow up, follow your dreams and fall in love. And the combination of soaring power ballads and energetic dance songs promises to boost dreary winter evenings and leave you humming all the way home.

Eugenius!, The Other Palace Theatre 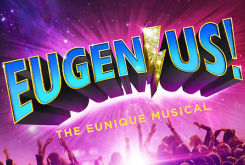