Fanny Brice, the real life performer and titular Funny Girl in Jule Styne’s 1966 Broadway musical, was a big-nosed Brooklynite in a sea of glamorous chorus dancers.

Funny looking and funny enough to raise a laugh, she carved her own niche and became famous as a comedian and singer. Telling the story of how Brice became the highest paid performer on all of Broadway, Funny Girl the musical revolves around the charisma of its central character.

Brice’s charm and gift for playing the clown are written into the plot, but so is the underlying tension in her fairytale marriage to smooth-talking gambler Nicky Arnstein (played by Darius Campbell in this revival).

She’s simultaneously silly, strong, gutsy and vulnerable, with more than her fair share of show-stopping songs. Much like Gypsy, the last Jules Styne musical to grace the Savoy, Funny Girl combines raucous ensemble numbers complete with chorus lines and comedy and rousing solos such as ‘Don’t Rain on My Parade’.

Then there's the role-defying, Oscar-winning performance by Barbra Streisand at the height of her career in the 1968 film adaptation of Funny Girl. The show hasn't been seen on the London stage since its 1966 premiere so Streisand has become the benchmark. All in all, Fanny Brice is a part with plenty of pressure. 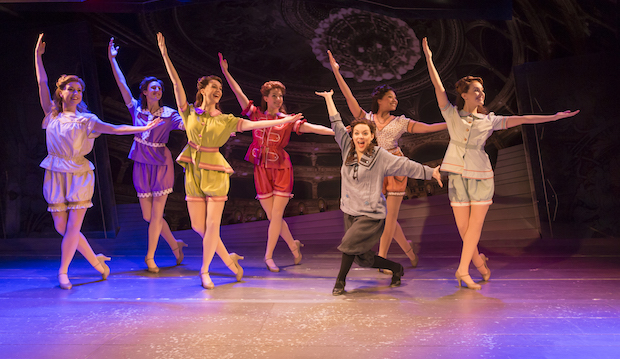 If anyone can pull it off, it's Sheridan Smith. She has the right credentials: comedy fame (Gavin and Stacey, Two Pints of Lager), musical theatre experience (Legally Blonde), tear-jerking tenderness (The C Word), plus the kind of infectious charm that elevates an actress to a national treasure.

And, sure enough, Smith is a revelation. Dwarfed by chorus lines of leggy dancers, plodding clownishly while they leap, she creates laugh-out-loud comedy from not fitting in. Her American diction is spot on, her infatuation with Arnstein rings true and not only does she hit all the right notes when belting out ‘Don’t Rain on my Parade’, but she makes it her own.

She's supported by a slick cast and Micheal Mayer's pared back yet pacy production complete moving conveyor belt.Inevitably with the story of a rise to fame, romantic climax, then the murky disintegration of the marriage, the first half is exhilarating and the second is flatter. But it's in the quiet tatters of the marriage that Smith brings out the steely strength beneath Brice's comic bravado. (We didn't know whether to weep or fist pump).

Then the show ends on the high of a rapturous standing ovation.