Inspired by the real-life story of Ruth Snyder, an American housewife who was executed for the murder of her husband, the play is a disturbing meditation on the subordination of women and the suffocating effect of mental illness.

Professional life is an ordeal for Miss A (Emily Berrington). Commuting gives her panic attacks, and the office is mired in anxiety and futility thanks to her boss’s penchant for groping during private meetings.

His proposal of marriage offers skin-crawling revulsion, but also a release from the drudgery of earning a living and supporting her overbearing mother.

Emily Berrington gives an affectingly taut central performance, flinching at her new husband’s touch, swallowing back the tears as she hides in the bathroom, howling and pleading for peace while still following the prescribed path of woman, wife, lover and mother. 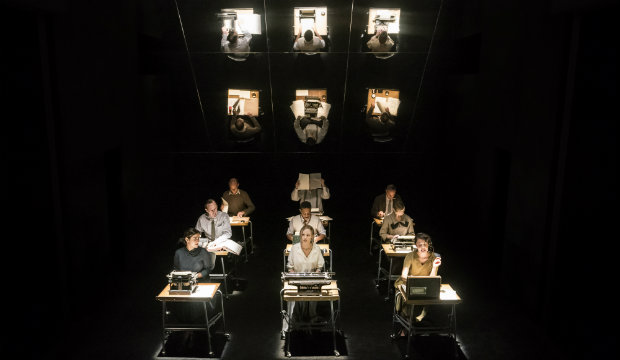 Over 10 episodic scenes we see all the things to which a woman must submit. Miriam Buether's slick set transforms for each section; it shifts from office, hotel, speakeasy bar and various different domestic spaces before the final courtroom and prison scenes.

A sloping mirror at the back of the set shows us the action reflected from a different angle. The effect is cloyingly close and an enlightening foil for the Expressionist form of Treadwell’s text.

Abrahami’s production amps ups the mannered repetitions, exaggerated sounds and shrill background noises giving each episode a nightmarish, claustrophobic quality. The stylised study of a woman’s breakdown is an inevitably uncomfortable watch, but this production leaves you with a striking sense of the social constraints and cultural machinations that push her to self-destruct.

Maly Drama Theatre of St Petersburg season: Uncle Vanya / Life and Fate, Theatre Royal Haymarket
Sign up to CW’s newsletter
By entering my email I agree to the CultureWhisper Privacy Policy (we won`t share data & you can unsubscribe anytime).