Prolific playwright David Hare delves into 20 years of Labour Party history, but this heavy-going play is bogged down with Big Ideas and combative dialogue

It's a synoptic story of personal connection and political repercussions over 20 years, with fictional characters serving as mouthpieces for a whole slew of Big Issues and an increasingly laboured plot about the Labour party leadership.

Though it’s peppered with shrewd soundbites on the state of contemporary democracy, the play itself is too strangely separate from actual politics to ever ring true. Unlike Hare’s masterful The Absence of War, there’s no clarifying vision or uncomfortable reflection in this play.

Feminism, consent, party politics, domestic abuse, terminal illness, trauma, the state of the NHS, female genital mutilation, addiction, adultery… Plenty get debated over two and half heavy-going hours of combative dialogue. Yet Corbyn and Brexit are totally absent for this 2018 Labour Party.

Director Neil Armfield's pared back production, with effective use of close-up videos, puts all the emphasis on talk, talk, talk.

We see Pauline Gibson (Siân Brooke) and Jack Gould (Alex Hassell) at loggerheads over the course of twenty years, from chaotic students to competitors in the race for Labour Party leadership. Occasional comic relief comes from Joshua McGuire as Press Officer turned campaign leader Sandy, but the majority of the play is verbal sparring with minimal emotional sparking. 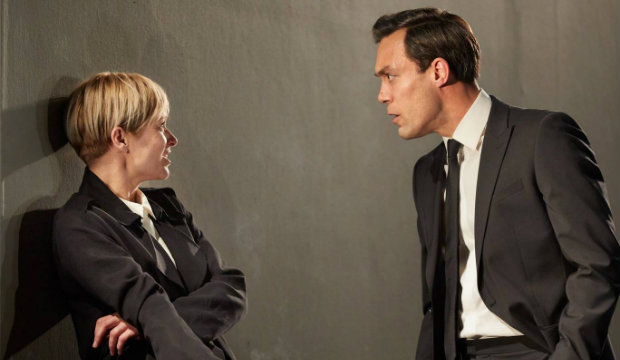 Characterisation is built on excessive exposition and psychobabble cliches that echo with artificiality. As the story shifts between university days, burgeoning careers and the present day we are constantly reminded that Pauline and Jack are the Damaged Women and the Son Under Shadow of Famous Father.

Despite commendable efforts from the actors there’s a greetings card tweeness to most interactions – ‘We are great friends, Jack, but we are not great lovers’, ‘Is there anything worse than a daughter who judges her mother?’ and, our personal favourite, ‘You’re fighting your own character’.

We want to root for Pauline as the strong female lead, but she rarely feels more than a vessel for Big Opinions, each of which is drawn out with dull detail. And the plot is similarly forced, skewed to enable specific scenarios. There’s a whole subplot of sudden adult death that seems only to serve the purpose of putting Pauline and Jack in the same place at the same time.

The narrative of a brilliant woman saving the NHS and taking charge of a flailing political party should be relevant and tempting. It’s a shame that Hare’s unfeasible plot devices and clunky characterization make it feel like a total fantasy.

When We Have Sufficiently Tortured Each Other, National Theatre review
Sign up to CW’s newsletter
By entering my email I agree to the CultureWhisper Privacy Policy (we won`t share data & you can unsubscribe anytime).