The patriotic summing up by proud German cobbler and song-maker Hans Sachs can be hijacked for dubious propaganda, but here his cry goes up emphatically not for nationality based on an accident of birth but on a constantly renewing and shared artistic legacy.

Superstar baritone Bryn Terfel singing Sachs is warm of heart and voice, a craftsman sage who cares for soles and souls, denying his own love for the daughter of a friend and helping the younger man she loves to win her hand.

And that hand is literally to be won, in the song contest that brings together the master singers of the title. Cue a deal of pomp and swagger – on a steeply stepped set (stupendous design by Mia Stensgaard) that resembles a colossal church organ given an Art Deco makeover, the craftsmen are gussied up in Masonic aprons and evening wear.

We stay in this grand hotel atmosphere for the more domestic Act II, and if that means Sachs knocking in nails at the occasional table, it does avoid the Mother Goose village scene that was a weakness in Richard Jones's otherwise marvellous 2015 production for English National Opera. And almost imperceptibly the set rotates 180 degrees, revealing a down-to-earth backstage life – takeaway coffees and headsets – that interacts with the brocaded pageantry from now on.

American soprano Rachel Willis-Sørensen as Eva has the unenviable task of making us believe in a daughter who will assent to be the prize in an old men's game – heavens, she even has to sit in a gigantic trophy cup – and she is not helped by the hideous outfit inflicted on her by costume designer Anja Vang Kragh. (What is this operatic obsession with stuffing grown women into unflattering skirt-and-blouse combos? ENO does it all the time. No real woman dresses like this.)

But it's a lovely voice, and as always I wished Wagner had given her more music and the fussy old blokes a little less. The wondrous song that wins her, and a good deal more besides, is sung by Gwyn Hughes Jones with a real sense that he is, with deep concentration and commitment, testing new melodic ground.

Johannes Martin Kränzle is a pitiable Beckmesser, the lascivious cheat whose theft of a song is exposed, Stephen Milling an imposing organiser Pogner, with Polish mezzo Hanna Hip delightful as Eva's maid, Magdalene, and Allan Clayton hugely likeable as her suitor, David. The quintet for the two couples are Sachs was sublime.

Antonio Pappano, conducting the orchestra and augmented chorus of the Royal Opera House, kicked off the fixture at quite a lick, and the brass was big and bold with a surprisingly light and sometimes shapeless top line in the much-loved Prelude. It's such a big sound all round that even the plus-size chorus, in choral society mode, was far from overwhelming.

But what an undertaking this is, in the 150th year since the opera's first performance, and 20 years since the last ROH Meistersinger. It's an impressive swansong from Danish-born Holten.

Art makes a nation, but it's people, wherever they are from, who make the art. 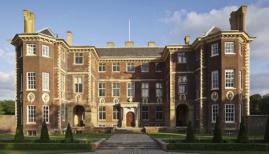