After development in Los Angeles, a sellout Broadway run in 2014 and success at The Other Palace Theatre, Heathers the Musical has reached the Theatre Royal Haymarket.

The audience is awash with Heathers, as plenty of people turn up dressed in preppy 80s style skirts and blazers in homage to the story’s popular girls: Heather Chandler, Heather Duke and Heather McNamara. A soaring 80s soundtrack blasts out to get you in the mood before the curtain lifts and our awkward outsider protagonist Veronica introduces us to Westerberg High School.

After tactically befriending the mean girls for protection and status, Veronica quickly tires of their shallow demands and finds herself drawn to the mysterious and moody new boy JD.

Carrie Hope Fletcher (Addams Family, Les Misérables) cements herself as one of the brightest young musical theatre stars, bringing charisma and superb vocals to Veronica and shedding the shadow of Winona Ryder’s famous film part to make it her own. And Jamie Muscato as Jason ‘JD’ Dean out smoulders Christian Slater to embody the Baudelaire-reading bad boy of our teenage dreams. The adolescent spark is brought to life with glee and a gloss of dark humour in a score that echoes the story’s mixture of the silliness and darkness.

JD’s rootlessness and traumatic past is communicated in the same breath as his enthusiasm for frozen Slurpie drinks in ‘Freeze your brain’. And the rock riffs and sassy lyrics of Veronica’s ‘Dead Girl Walking’ make for an anthemic celebration of girls on top (literally) as she seizes the moment and seduces her crush. ‘Sorry but I really had to wake you. See, I decided I must ride you till I break you,’ she sings before demanding JD strips. 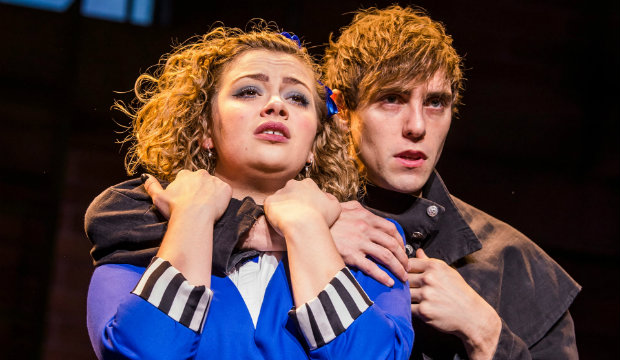 Carrie Hope Fletcher as Veronica and Jamie Muscato as JD: Heathers the Musical

After the thrill of first love, insecurity and a lethal spark of psychopathy lead the new couple to up-end High School’s hierarchy by killing the popular kids and passing it off as a series of suicides.

It Girl Heather Chandler is tricked into drinking drain cleaner, then haunts the stage to supervise the mourning. And after the murder of a pair of predatory jocks is passed off as a repressed homosexual suicide pact, the funeral becomes an all-singing all-dancing tribute to de-stigmatising homosexuality with the song ‘I love my dead gay son’.

And here’s where the stage show of Heathers feels especially refreshing. Thirty years since the film as teenage mental illness and suicide continue to dominate headlines and inspire controversial stories such as Netflix’s 13 Reasons Why, Heathers is still shrewd on the social context around such suffering.

With a lively levity and exaggerated horror, the show captures the complexity of the teenage psyche and the way in which it can be exploited. But it does all this with plenty of nostalgia and charm. 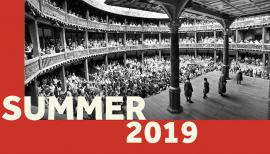