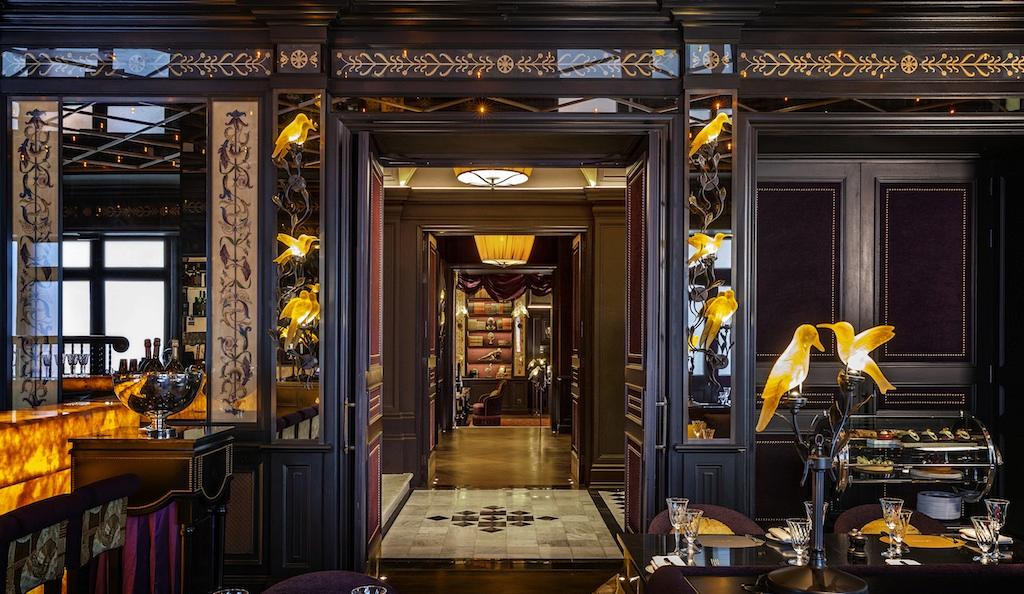 Best New Year's Eve hotel breaks: London stays to book now
With party season, present buying, tense family get-togethers and the pressure of cooking up a feast, Christmas can be an exhausting time of year. So why not use the window between 25 December and 1 January to escape for a bit of pampering at one of London's top hotels? Insider's tip: this lull in the festive period is the perfect time to find and book New Year's Eve hotel packages.

Whether you're a local looking for a staycation or an out-of-towner visiting the city, these are the sleekest, coolest, newest hotels in London – all fit to make sure you ring in the New Year in style. 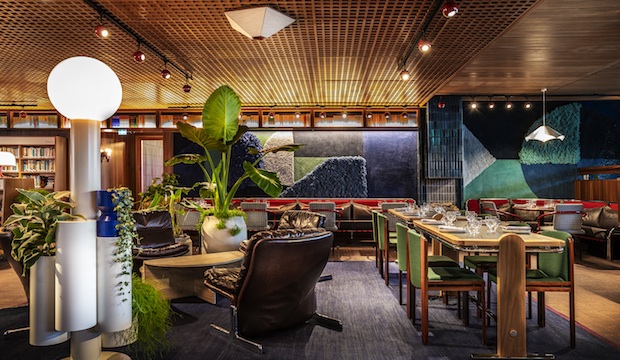 Best for… a slice of US lifestyle

The Standard is one of New York City’s most infamous hotels, boasting no less than three sky-high bars. Now, the party-loving establishment – whose first branch launched in West Hollywood in the late 90s – has opened a London outpost, moving into a former Camden Council office block by King’s Cross station last summer. The London branch boasts 266 rooms, ranging from singles for as little as £150 a night to luxe suits for over £1,000 that boast bathtubs on the terraces.

The hotel's executive chef Adam Rawson heads the two ground-floor restaurants: Isla and Double Standard. While those after something more fancy should head to the 10th floor, where Decimo – the latest restaurant by Michelin-starred, Bristol-based chef Peter Sanchez-Iglesias – is sure to delight. 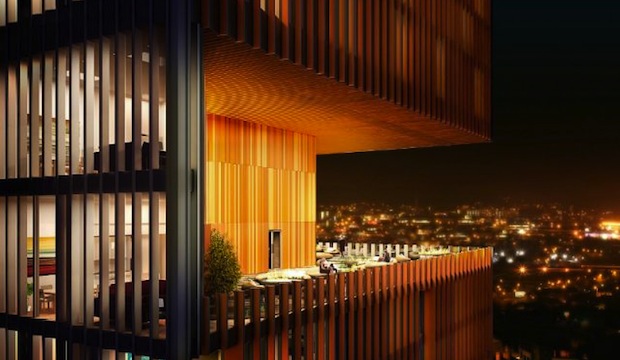 Best for… feeling at home in a stylish setting

Harry Handelsman, the property developer behind Chiltern Firehouse and the St Pancras Renaissance hotel, set his sights on new heights, with the opening of his new ‘design hotel’ The Stratford. And if you’ve an eye for seriously stylish spaces, you’ll want to check it out. Spread across seven floors, the space – boasting pared-back interiors by Space Copenhagen – aims to evoke the simple glamour of New York’s long-stay hotels.

A highlight here is the hotel’s fine-dining restaurant, Allegra, headed up by chef Patrick Powell who previously collaborated with Handelsman at Chiltern Firehouse. The restaurant’s positioning on the seventh floor makes it an ideal location from which to watch the NYE fireworks. Or head out to the roof terrace and enjoy the countdown in the crisp, winter air. 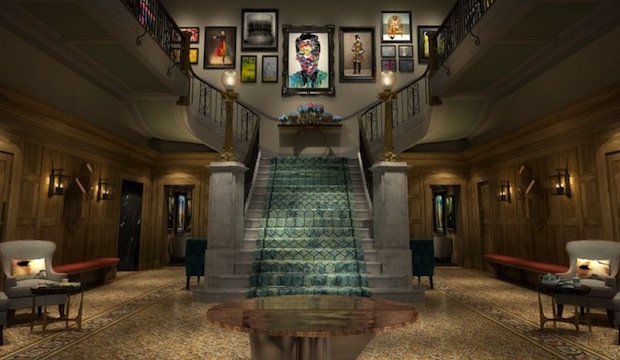 Best for… a stay in a historic building

The Dixon might be one of London’s hottest hotel openings this year, but the Grade-II listed building it’s housed in dates back to 1905, when it was Tower Bridge Magistrates Court. The 193-room hotel is part of Marriott’s Autograph Collection, so expect boutiquey vibes and finger-on-the-pulse styling throughout its rooms. The Dixon’s location close to Tower Bridge makes it ideal for ringing in the New Year, too: not only will you enjoy a prime view of the fireworks, but you’re also within walking distance of several cultural landmarks: the Tate Modern, National Theatre and Shakespeare’s Globe among them. 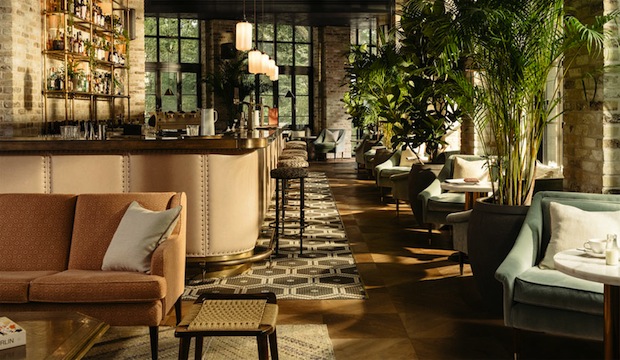 Best for… seeing the fireworks up close

The Hoxton’s Southwark outpost is the latest addition to the achingly cool hotel family and the best of the bunch for catching London’s major NYE action. Situated close to the South Bank, a north-facing room here should set you up nicely to catch the fireworks exploding over the river at midnight. For a bit more atmosphere, head up to the Seabird, the hotel’s rooftop restaurant, and celebrate the countdown with your fellow guests. From there, views of the city’s glittering skyline will be unparalleled. Arrive early in the day, or extend your stay, to make the most of being within a stone’s throw of many of the city’s major galleries and theatres. 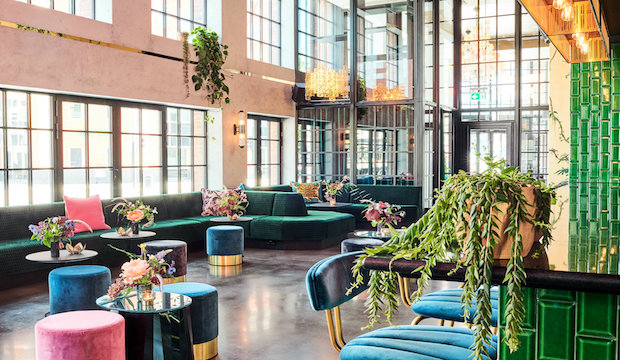 Located in a six-storey warehouse building, The Curtain perfectly blends with its east London surroundings. The hotel’s 120 guest rooms and suites are characterised by exposed brickwork, hardwood floors and large warehouse windows. The industrial atmosphere doesn’t come at the cost of comfort, though. The Curtain offers spa treatments, morning yoga sessions and a rooftop pool with views over the city – Follow your dip with something from the all-day Mediterranean menu at the Lido restaurant, or perhaps even a frozen take on your favourite cocktail? In the basement, meanwhile, guests are served American soul food in the famous chef Marcus Samuelsson’s restaurant, Red Rooster. 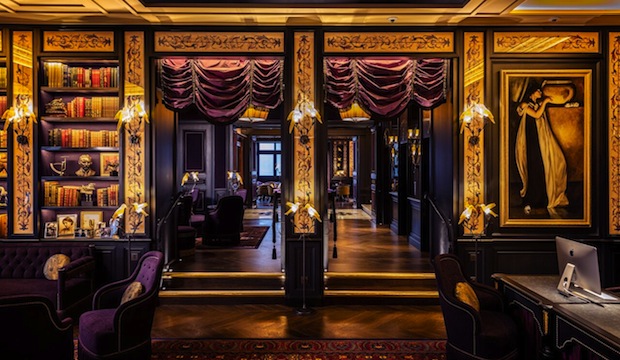 What do you get if you cross a Grade II-listed former Baptist church with the work of French architect and designer Jacques Garcia (you know, the man behind The NoMad Hotel in New York)? L’oscar Holborn, that’s what. Thanks to L'oscar International Hotels – and a refurbishment budget of no less than £24m – the space is now a plush, finery-adorned hotel practically dripping in over-the-top (yet gorgeous) interiors. The 39-bedroom hotel, which opened in June 2018, also has Michelin-starred chef Tony Fleming in the kitchen, so be sure to book a table on at least one night of your stay. 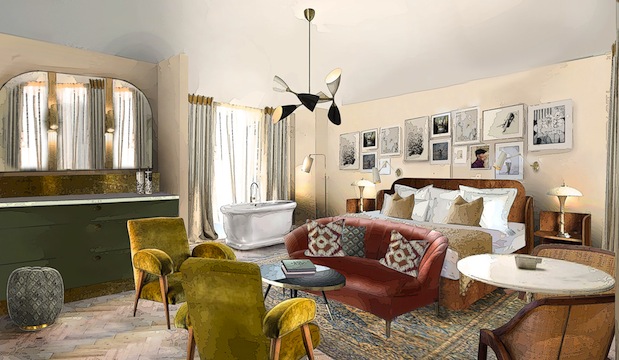 Best for… feeling part of the clique

Soho House has been the go-to members’ club for the arts and media crowd since it opened its doors in the mid-90s. Today, despite having 23 properties in total – eight in London alone – there’s still a hefty waiting list of hopefuls looking to acquire membership. But perhaps not for much longer, because the group is opening yet another property. Redchurch Townhouse in Shoreditch is designed in a similar style to the group’s Dean Street Townhouse and Kettner's Townhouse. Its 37 bedrooms range in style as well as size – from 50s to 70s – but all guests can expect retro chandeliers and armchairs. There’s also Cecconi’s restaurant to get excited about, serving the brand’s much-loved signature dishes (veal milanese – yes please), while diners will be surrounded by the work of east London artists. 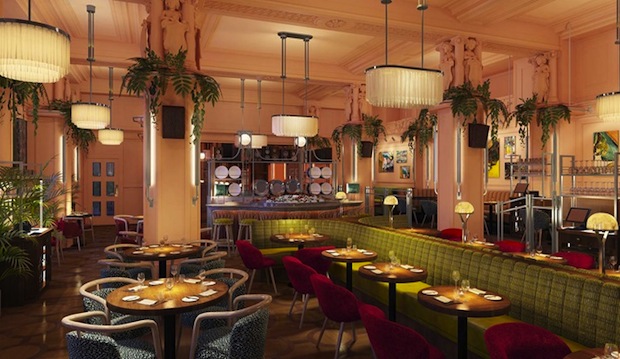 Those who book a stay at the revitalised 120-year-old hotel (formerly The Russell) – which has recently undergone a £85 million refurb – should head to Fitz's cocktail bar to celebrate New Year’s Eve. Its scene-stealing massive glitter ball (reputedly the largest in the capital) plus velvet chairs make it a glamorous, cosy and comfortable setting to ring in the New Year. But The Principal’s resident seafood restaurant, Neptune, is the main attraction here; despite only opening earlier this year, it’s already being hailed as the capital's coolest fish restaurant. 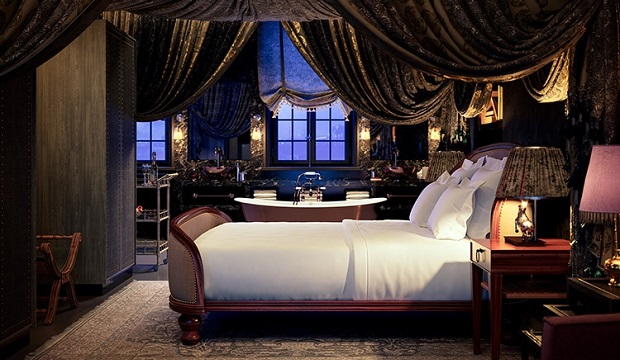 The Mandrake hotel, which opened its doors in 2017, is an independent property which professes to be hipper than hip; it even had a resident tattoo artist. Yet, despite the name, The Mandrake promises to do more than just give you a bewitchingly good night's sleep. Book a stay there to see what this mysterious hotel has to offer. 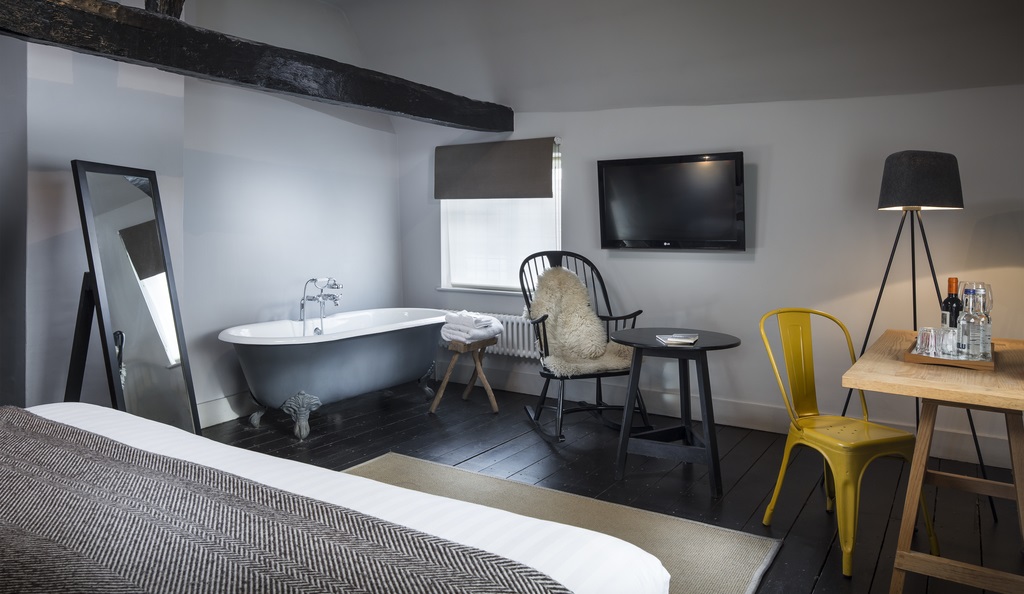 Best for... a breath of fresh air

Have a country break without having to travel too far out of ton – just ride to the end of the Metropolitan line. If you fancy a Boxing Day walk, you're right in the posh provinces and the charming Chilterns are on your doorstep. Or you can visit Hughenden Manor, Disraeli's country home in nearby High Wickham, or ramble around Cookham, home of British artist Stanley Spencer. The Crown Inn is a Mr and Mrs Smith property, which means, for those not au fait with hotelspeak, that it's perfectly luxurious. 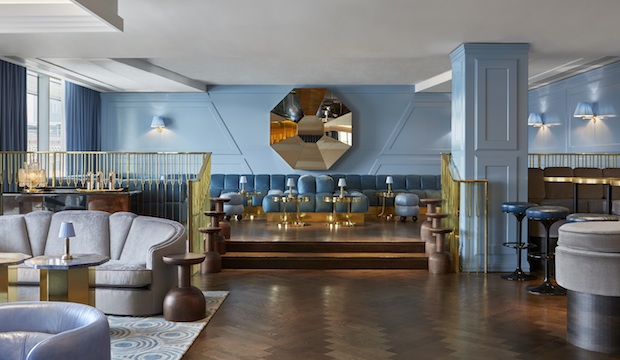 Sea Containers London serves some of the best cocktails you'll find in all of London (and further afield, too) in its downstairs bar Lyaness (formerly Dandelyan). But there's more to the hotel than cocktails courtesy of Ryan Chetiyawardana (aka Mr Lyan). With the hotel perched on the South Bank, you'll have a second-to-none view of the midnight fireworks display over the river, too. Be sure to ask for a room with a view. 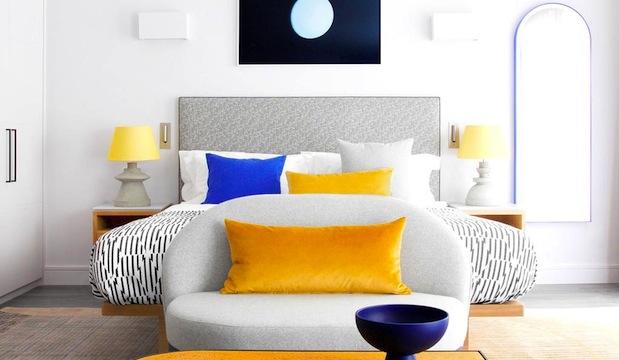 Newly opened Rockwell East in Whitechapel is London’s first ‘design-led aparthotel’. Designed by Waldo Works, the interiors firm behind The Laslett in Notting Hill, a stay here on New Year’s Eve amid its bold blues, loud yellows, and all-round bright and breezy feel will blow away any lingering cobwebs of 2019 in no time. Prices are reasonable too, with double rooms starting at £150 a night. 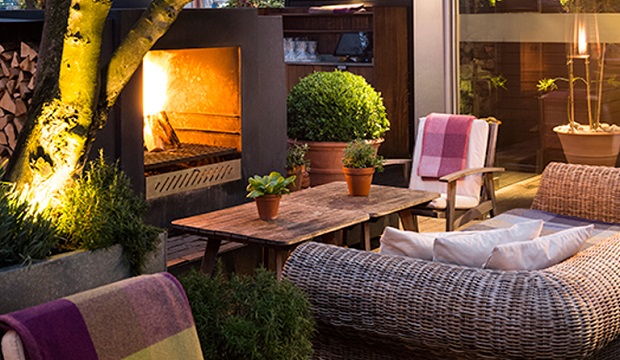 Best for... the rooftop

Terence Conran designed the rooms at the Boundary and there's an orangery and a garden on the roof. The terrace looks out over east London and from here you can see Canary Wharf and, towards central London, perhaps you'll see fireworks sparkling in the night sky. Don't let the size of the building fool you, this is a little hotel, with only 17 guest bedrooms and suites. Each room's design is based on the style of a different modern architecture style, from Bauhaus to Le Corbusier. You'll find a yoga mat in the cupboard and breakfast delights downstairs in the Albion Café. 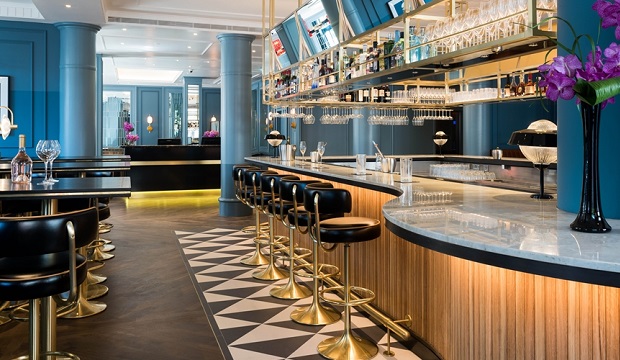 This could be the classiest location from which to ooh and aah at the fireworks. The Trafalgar St James' rooftop bar has amazing views over the Square, and its revelling crowds, across central London, and a lovely Mediterranean restaurant. The hotel reopened in October 2017, following a name change (from The Trafalgar) and a facelift, and it's now better than ever. You'll need to buy tickets to the rooftop event, which isn't included in the hotel stay. 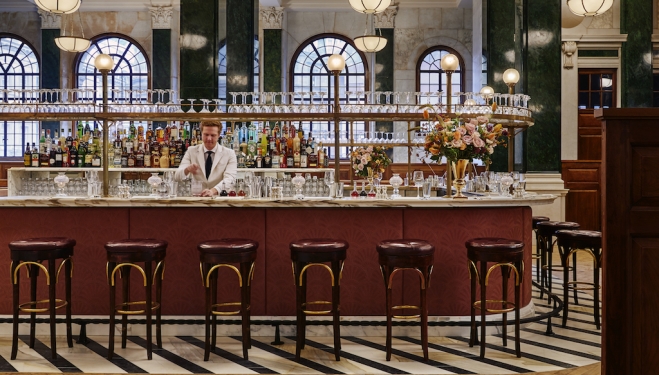 A Soho House property in the heart of the city, The Ned was 2017's hotel of the moment. While its buzz has somewhat died down, its offering is still excellent – but it's that little bit easier to get your foot in the door now. Set within an elegantly restored old banking hall, The Ned has nine restaurants and over 100 spa treatments. If this isn't enough to fill up the dead days between Christmas and New Year, there's also a secret vault bar somewhere downstairs – this members-only club is lined with over 3,000 safety deposit boxes – and no one will find you there! 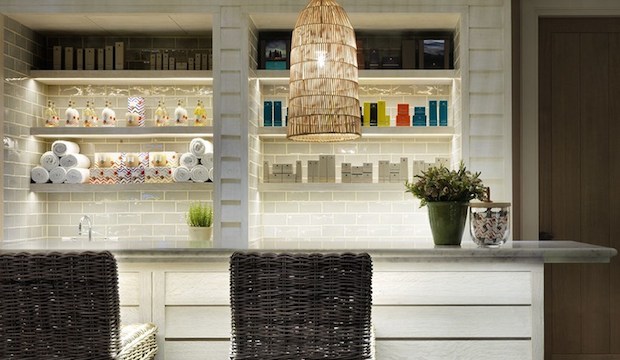 Best for... downtime at the spa

At Ham Yard Hotel you'll find more home comforts than in any mansion. There's the Croc Bowling Alley, which has Howard Hodgkin's paintings on its walls, and there's also a full screening room on site. If that seems a bit full on for your festively frazzled soul, there's always its brilliant wellness centre. The Soholistic Spa is filled with natural materials and luxury treatments. You might even want to muster up some strength to train in its hypoxic studio, where you can try altitude training with a complimentary 30-minute session. Ham Yard Hotel is located centrally, just on the edge of Soho, so if you stay over New Year's Eve, too, you're bound to find a party.