Gravity-defying feats and acrobatics mix with humour in this must-see Spanish circus show from eia.

It's worth the pilgrimage to North Finchley to see eia in action for inTarsi: the troupe of four performers, Armando Rabanera Muro, Fabio Nicolini, Fabrizio Giannini and Manel Rosés Moretó, captivate adults and kids alike with their extraordinary acrobatics, using simple boxes, a teeter board, a trampoline - and each other - as springboards for amazing flips and contortions. My two co-reviewers, aged 8 and 5, had their mouths hanging open for most of the show. 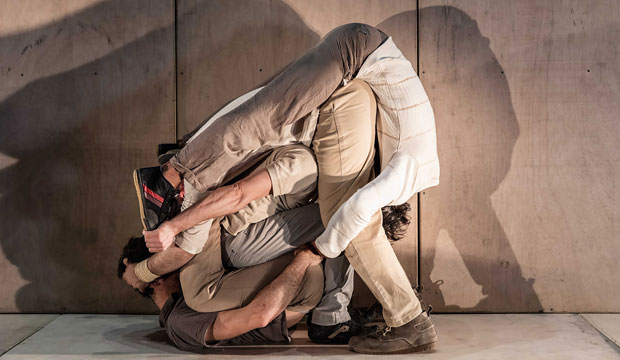 Yes, watching plainclothes, ordinary-looking guys do incredible things with their bodies - and little in the way of fancy props or background - is cool enough on its own. But what makes inTarsi a must-see is the emotional side of the show, which tells a story of loneliness and connection without any words thanks to the easy teasing and playing between the performers.

While much of the show focuses on the interaction between the acrobats, the moments of solo performance are particular highlights. Most memorable - and a moment my children continue to bring up in conversation - is when 'strongman' Fabrizio Giannini finds himself in front of the audience in only his pants. This moment of vulnerability, which subverts the typical 'strongman in a circus showing off his muscles moment', ends in laughter when he starts making his tummy undulate up and down.

inTarsi is a spectacle aiming to illustrate there is more that connects us than divides, and nothing connects more than wonder. And laughter. The Spanish circus troupe eia has established itself as one of the most exciting contemporary circus troupes to watch in Spain and Europe since its formation in 2009, and has, unsurprisingly, won several awards, including the Barcelona City Prize 2011, Special Jury Prize in the Zirkolika Awards 2016 for inTarsi and the MAX Award for Outstanding New Show 2017 for inTarsi. Don't miss them when they're back in London in 2019. 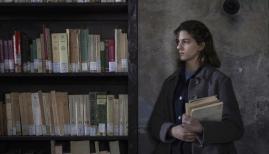 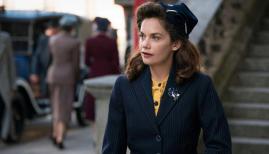