How to work from home with a nanny 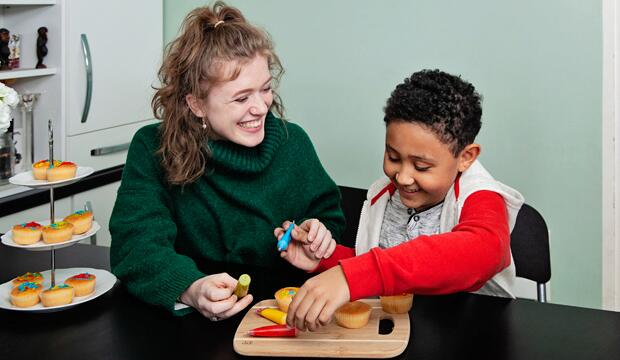 Koru Kids provides trained and local nannies for Londoners
This year changed the working landscape for everyone. Parents have seen their homes transform dramatically, first into home offices, then nurseries and homeschool setups, with children home 24/7.

For many London families, their nannies have been instrumental in getting them through the pandemic - and helping them retain their sanity.

As millions are attempting to work - while cooking, cleaning, entertaining, teaching maths and English and logging onto countless educational platforms for the kids all day, on repeat - it's the amazing nannies and childcare providers behind the scenes that are supporting working parents to make it all possible.

We chatted to four families about their experiences with their nannies, all hired from Koru Kids, for their top tips on choosing the right nanny for their families - and how they all stay harmonious within four walls, together. 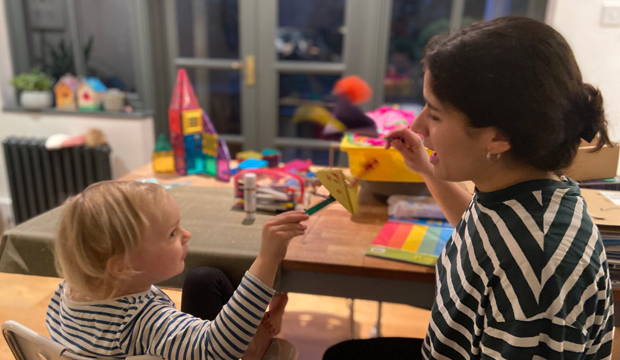 “Sophie feels like an extended member of the family”

Louise, mum to Ivy, 7 and Edie, 3, lives in Crystal Palace. When she went back to work after maternity leave, she initially had a childminder, but when her youngest started full-time nursery and the family needed after-hours care, Koru Kids was the natural choice.

Fun fact: Louise first learned about Koru Kids from a friend, a former work colleague who was so enamoured with the childcare agency that she eventually ended up taking a role working for them. Koru Kids appealed to Louise from the get-go: unlike many other platforms that seem to have thousands upon thousands of thousands of options, Koru Kids pre-selects and pre-screens nannies.

“First of all, you have the opportunity to read through everybody’s profiles, which is amazing. You get to understand what the Koru Kids interview process is, and it feels a lot more rigorous. They do a lot of the hard work for you and I had real confidence knowing that everybody would be good," Louise says.

When the family met Sophie, a kids' dance teacher, it just clicked. Sophie started as an after-school nanny for the family in September 2020, when Louise's eldest daughter, Ivy, was back in school and her younger child, Edie, was starting nursery for the first time.

Louise was impressed by Sophie's flexibility - she quickly added Monday mornings to her schedule, a huge help as both Louise and her partner are directors of design companies, and Monday mornings are manic for them. Sophie's schedule changed once again when with the most recent lockdown, when her hours shifted from afternoons to mornings.

“Sophie settled in really quickly with the girls. She’s a dance teacher, so they play together and dance together. They do Lego, crafts, baking, cooking, trips to the park - they’re constantly entertained. We work in our bedrooms so we can focus on work and they spend most of the time downstairs," says Louise.

Compared to a childminder, Louise has found various benefits of nanny care, from the 1:1 (or, in her case, 1:2) ratio to the fact the kids are happy and relaxed in their home environment. 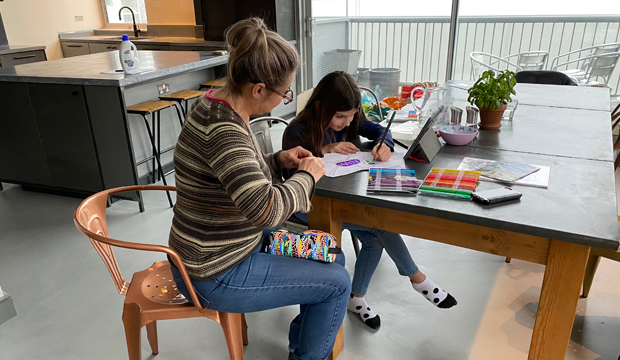 “She’s just brilliant and really supportive of the kids. Alison is extremely personable - I would call her a friend”

As a full-time lawyer for Sky, Parsons-Green based Lou, mum to Charlie, 11, and Nell, 10, has an incredibly hectic day job, which includes managing 11 people on her team.

Needless to say, she needs "a safe pair of hands" for her kids, whether it's afterschool help or a nanny who can be there to help with homeschooling during the pandemic.

The family's found it all in one package: Alison, a Koru Kids nanny, joined the family last year. Lou felt the two shared the same parenting values, and liked Alison's "worldly wise" influence and demeanour.

"She has two adult kids and she has the maturity and gravitas to effectively support," Lou explains.

In the first lockdown, when people were unsure exactly what the rules were around lockdown and whether a nanny in the home was allowed, Lou was impressed by how Koru Kids kept families updated, letting them know the latest government advice.

When Alison was able to start coming in, the family swapped around her hours: since the family's childcare needs were greater in the day - from morning through lunch - rather than in the afternoons, Alison now comes earlier, to assist the kids, in Year 7 and Year 5, with their morning lessons.

“She really was helping consistently and we have a very similar approach to parenting and discipline. There’s no sort of feeling of difficulty around us being in the same room at the same time. For the most part, I’m in my office and the kids are in the dining area/kitchen.

"While the Zoom and online schooling is very good, there’s always a need for another person. It’s hard when you’re a working parent. For example, we don’t have a lunch break, but the kids have a window they need to have their lunch in. If we didn’t have Alison, there are some days when they would have to miss eating because I’d been on a call. It’s a godsend," notes Lou. 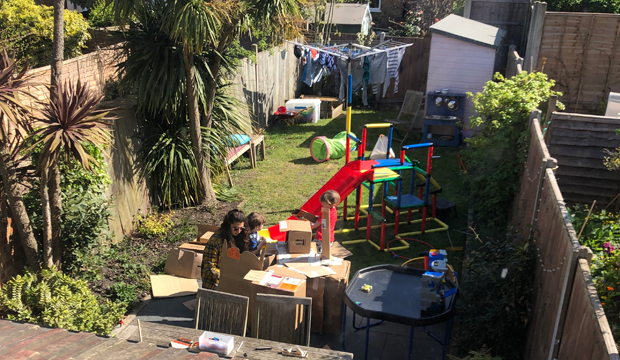 Photo: Jenna's view from her office window, of Georgie playing with Seamus, 5, and Ivo, 4, in the garden

"It’s really changed my experience of having children: having them at home but not having to be the person responsible"

Jenna, mum to Seamus, 5, and Ivo, 4, is a full time researcher based in East Greenwich. She found her nanny, Georgie, a university student, through Koru Kids 18 months ago.

When Jenna’s son Seamus started reception, he initially went to an after school club, but the family wanted him to come straight home from school.

“We liked the idea of him being home, putting on his snuggle suit, and having the chance to chill out and play and have a hot dinner,” Jenna explains. Koru Kids provided the perfect solution.

When the pandemic hit and everyone was ordered to work from home in March, with schools shut, the family agreed that Georgie was indispensable - and increased her hours (once government rules allowed her to come in again).

"The money I would have been spending on nursery I was able to redeploy for Georgie to come. It’s so easy because I don’t think I even spoke to Koru Kids about it - the nanny submits the hours through the app and you approve them. Georgie went from working 12 to 40 hours a week - all submitted through the app. Nothing needed to change," explains Jenna.

Having everyone at home isn't an issue: Jenna's husband uses the loft as his office, she's taken one of the bedrooms to work in and Georgie and the kids have the whole downstairs, with the kitchen and garden. Jenna did make some adjustments to make sure she wasn't interfering with Georgie's authority, however.

"I drink a lot of coffee and I noticed if I was popping down to make a cup of tea the boys would be shouting 'Mummy' and it would sort of interrupt her flow. I figured it was better to keep out of the way so I bought a flask, which I fill up in the morning and take upstairs with me. Then I come down at lunch, check in with kids and with her," she says.

"Georgie has a dog and her own paddling pool. She brought over this pool, and my resounding memory of 2020 is sitting in my room working, watching my children slide down that slide into the paddling pool, feeling absolute happiness and joy, feeling really lucky," says Jenna.

When Jenna was initially looking for a nanny, she wanted someone with early years experience - although she envisaged her younger son, Ivo, would primarily be in nursery, someone who could cope with a younger child was key. Georgie had worked for a spell in a nursery - serendipitous since she now spends a lot of time with Ivo, too. She also lives locally, and on her own, so the families were able to bubble together. Jenna and her partner have been picking Georgie up and dropping her home during the pandemic, as an added precaution for everyone.

Georgie has been very proactive in terms of the kids' homeschooling, getting tips and resources from her sister, a teacher. In the first lockdown, Jenna would spend some time on a Sunday coming up with a theme for each week - say, sea animals - and Georgie would come into work on a Monday and run with it.

"Because we’ve seen so much of her in this last year, she has totally become part of our family. She’s part of the furniture, she sees our house as a second house. It's strange to get used to but once you do it's just like having another member of the family," says Jenna.

"She was also really grateful for the job in a way because it meant she had social interaction. I would never have seen myself as a nanny person but I’m totally sold now - she’s not really my nanny, she's Georgie." 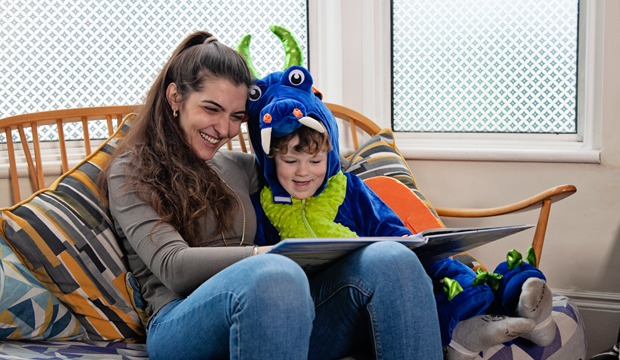 Ollie, based in Queen's Park, started using Koru Kids this month for his baby daughter, Lily. While Koru Kids is primarily a service for those with children aged three and up, some nannies can come in to help with younger children, especially during this pandemic period, and with Ollie's wife Lucy starting back in full-time work post-maternity leave, they needed a nanny.

"What struck us about Laura was that she had worked with young children before. She was honest. She’d worked for a number of different families for decent periods of time. She was reliable and had staying power," says Ollie.

Since both parents work full time, they’ve mostly left Laura to it - but they do enjoy that they can pop downstairs for a cuddle.

"We like the idea that there’s a really close one-to-one relationship with a nanny. Having a nanny at home is incredible because it allows you to get rid of all of that travelling time. It’s the best possible set up: being able to pop in. It’s wonderful for Lily to have that third adult in her life," Ollie says.

Koru Kids is a childcare platform matching working parents with part-time nannies - prices go from £13-£16 an hour, based on experience. Nannies are available for short-term contracts or longer-term roles, for after-school hours or during the day for help with homeschooling and childcare. All nannies are vetted and reference checked, and once a family decides to start working with them, they are provided with first aid training and an Enhanced DBS check. Nannies are allowed to work in the home during the pandemic, under all tiers and national lockdown.