Why Clean Up! is the picture book to read with the kids this summer

We chat to bestselling authors, Nathan Bryon and Dapo Adeola, about their new children's book, Clean Up!, a story that tackles pollution 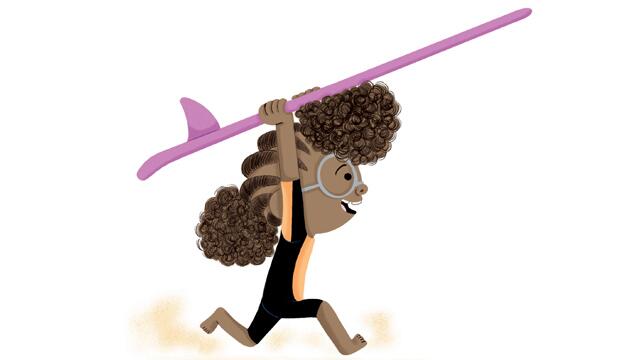 Rocket goes on holiday in the Caribbean in Clean Up! Photo: Dapo Adeola/Puffin
We've read and re-read author Nathan Bryon and illustrator Dapo Adeola's breakout hit picture book, Look Up!, over and over again, and it's one of those books that gets more enjoyable each time you read it: there's a new detail you notice, a picture that makes you laugh out loud, or a turn of phrase from utterly captivating, curious and unstoppable protagonist, Rocket, that makes you smile.

It's also a book that appeals across ages, genders and interests: the story of a spunky, astronomy-obsessed kid who wants to encourage others to look up at the stars and learn about space, especially her phone-addicted brother, Jamal, who won't stop looking down.

The book was released in June 2019, and has garnered plenty of accolades and cult fans, with the momentum never slowing - in fact, debut children's book author Nathan Bryon and illustrator Dapo Adeola are still getting comments from fans as if it was only published last month.

Good news then, that their second picture book, Clean Up!, is out this July. In it, Rocket tackles the climate crisis as she mobilises everyone around her to pick up the plastic that's polluting the beach on the Caribbean isle where she's visiting her grandparents.

Rocket is a character parents and children alike fall for (no wonder kids all around the world chose to be her for World Book Day): the big haired, glasses-wearing, space-obsessed black girl has an infectious energy and a personality that's inspired by one of Dapo's nieces, a now-10-year-old who questions everything and approaches life with curiosity, gusto and a real sense of purpose. There's a third book planned in the series, too.

We chatted to Nathan and Dapo about how their books are created collaboratively, the importance of reflecting the world around them to our children and their top tips on how to get into writing and illustrating - if you're a kid. We also got a few of their favourite must-read kids' books - although if you need more to round out your summer reading list, don't miss our article on the best inclusive kids' books, as selected by Round Table Books' Layla Hudson. 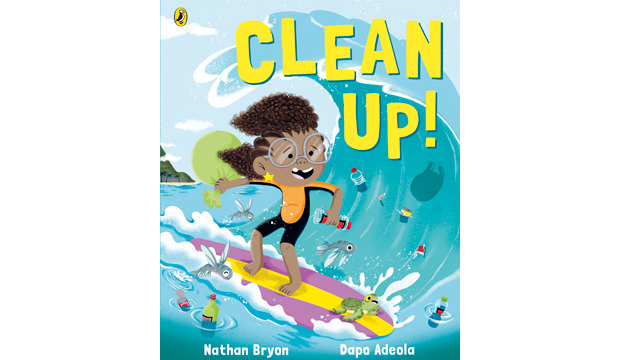 Can you tell us a bit about how Clean Up! came about?

Nathan: I went back to Spain where my grandma lives for her funeral and I was on a beach - maybe a year and a bit ago. I was sat on the beach just taking it in after the funeral and the beach was just covered in plastic, absolutely covered in bottle caps. It was so gross. The story kind of started for me in that moment.

Dapo: One of the first things that we were keen on doing was taking her abroad in this book. It's not a specific Caribbean island. What I ended up doing was drawing references from different islands that I’ve come across visually and asking friends of mine to send pictures of their islands so that I could find little bits and pieces to take and put into this second book... it's what an island in the Caribbean would look like and the problems that several islands in the Caribbean have at the moment with pollution.

How important is it for children's books to tackle current issues, like the climate crisis?

Nathan: I think what we we’ve led with in our series is character. It comes via Rocket. She is the sort of human being who is aspirational, she’s inspired by life and if anything, if kids take that away from the books alone, that’s super important.

Obviously, we bring topics to these books - Look Up! is about being present and Clean Up! is about being part of a community and bettering your space - but at the end of the day if kids take Rocket’s energy and put that into something they’re just as passionate about, that’s a-OK with me. I’m not trying to force people to care about certain things, they’re just things that I care about that I want to share, and Rocket’s energy is the energy I would love kids to take forward into whatever they want.

That was one of the things that we wanted to do in the books: we wanted to do it through Rocket herself in terms of her mannerisms and the way she is so the kids can see that it’s OK to be curious and want to know more about what’s going on in the world. It’s OK to exercise your agency in things that are going on. 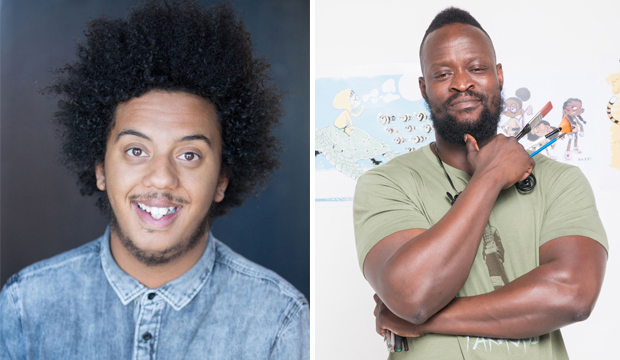 Can you tell us a bit about your collaborative process together?

Nathan: We work together very closely. The inception of this book is quite unusual for picture books in general because we were friends before. We worked together before we got the deal anyway. I approached Daps in 2015 with an idea for a character. A girl called Rocket, big hair, glasses, obsessed with space. Daps has a magical power where when I give him a brief he just nails it in one. He sent me the picture back - a week later or something - and I was like, that’s her, that’s it. That’s what it is! I don’t think the design even changed that much from what the final one was.

When it comes to story and stuff, we’ll bat that around together. I want to make sure that I’m telling a story that he’s interested in and he’s inspired by, and then I would just say that, I am very new - when I first came into this game, I wrote for different kids' TV shows but the picture book realm was very new for me and it was very collaborative and I was learning off Daps. It was just like we were trying to make it right, together, I think.

Dapo: It was a fascinating thing because what I do normally, up until that point - it doesn’t involve collaboration. What I was used to doing was doing commission work for people. I would come in almost as a pencil for hire, draw something and then leave basically.

This was the first time that this was a 50:50 co-created project… The door’s open for us to be hands on with each other’s contributions to the book. That helps to make it a more cohesive book in that respect. There’s no clear distinction between where I start and where Nathan starts - it fuses together really wonderfully. 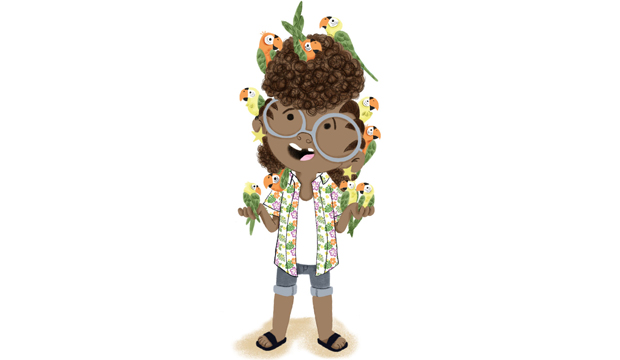 What advice would you give to budding writers and illustrators? Any top tips?

Dapo: All those things that Nathan said are applicable to illustration as well, I drew the inspiration for Rocket from my niece so characters are literally all around us in the world. One of the fun things about doing this particular job is that I get to reflect the characters that I see in these books.

I would advise any child trying to get into this from an illustration perspective to draw the world around you. The one key thing I have to say: it does not have to look good. It doesn't have to look like a work of art but it has to be something you understand when you look at it yourself. As you get better at it, more and more people will be able to understand it and you’ll be able to translate the world around you in a more efficient way. 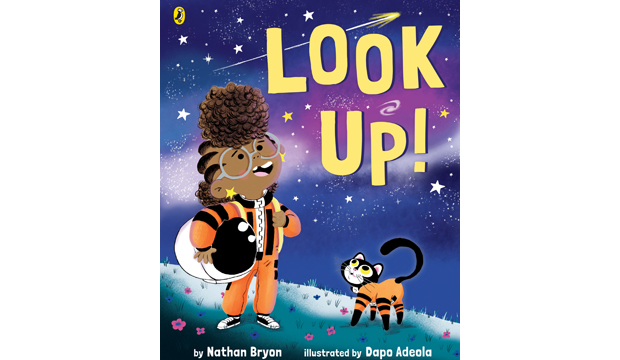 What can parents do to help change how children's publishing looks, so that it's more inclusive?

Nathan: We get loads of wonderful messages from parents on Instagram saying that they want to diversify their bookshelf at home. That is where it starts, you know like, whether you want to call it conscious or not, when you walk into a bookshop, challenge what you’re buying. You want your kids to see a round world and experience stories from all over the world. Buy those stories and tell them.

Dapo: There are multiple things that parents can do, a few key ones which are easy to do is find the diverse talent and bring it home to your children. Find the authors, find the illustrators. Learn a bit more about them, find them and really do that research. All the information is out there. I do see a lot of people, especially with the events of June, posting links to where people can find books, to where people can support and buy books from diverse and black and brown authors and illustrators.

Ask the questions as well. If you go into the bookstore and you don’t see that diversity on the shelf, then ask. It could be that because we are a very polite country, and nobody is asking the question, that the bookshop doesn’t understand that it needs to change what’s on its shelves. From a commercial perspective, it makes sense for bookshops to have more diversity because they would sell more books. It’s not something they would willingly not do if you ask.

Tell us a bit about your London lives: Where you grew up, where you live, favourite haunt?

Nathan: I grew up in Shepherd’s Bush and my favourite London spot would have to be a Caribbean spot called Ochi. It’s on Uxbridge Road next to Shepherd’s Bush Market and it’s my favourite Caribbean food. I’ll grab some food from there, then I’ll probably meander down to my house and get some beers along the way. I’m a big Shepherd’s Bush fan. I know this area intricately. I know all the spots. I love it.

Dapo: I grew up in Brixton. I spent about 28 years of my life there. And if I had to say a favourite spot it would have to be Brixton, literally from the station to the market, the whole area, I have so many memories growing up there. I moved to East London, to Hackney, and I spent the first six years that I lived up here finding any excuse to go to Brixton. I go back all the way from Hackney to Brixton and beyond for my haircut. So any reason to go back to south London is definitely something that I relish. It’s such a part of who I am.

Nathan and Dapo's favourite books - then and now

Keen to get your kids reading more this summer? Nathan and Dapo give us their top picks for kids of all ages: