Carbs are cool once more thanks to London's pasta revolution. Pasta bars are opening everywhere showcasing pasta-making prowess, and serving up both classic and creative incarnations of the beloved Italian food. Handmade pasta is evidently the comfort food we all crave.

It's time to channel your inner Sophia Loren who adored her pasta – the Hollywood actress memorably said: 'I owe everything to spaghetti'. Here's where to find the most delectable pasta across the city. 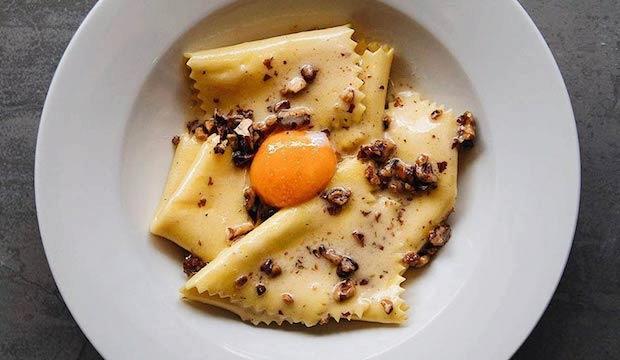 According to Grace Dent, Bancone is 'casually orgasmic and deeply affordable'. I demur: silk handkerchiefs or fazzoletti are the heavenly signature dish at Bancone. They are paper-thin, perfectly al dente pasta pockets draped fetchingly in a sticky indulgence of walnut butter. This is pasta perfection created by e- Locando Locatelli chef Louis Korovilis and a treat to be savoured.

Taglioni with seaweed butter and a comforting rich dish of braised lamb tagliatelle, rich with garlic and rosemary, are wonderful too.

Start with dattarini tomato bruschetta and a resplendent plate of burrata and be sure to order the divine gianduja (Piedmontese chocolate and hazelnut) dessert too.

Bancone raises the bar on pasta and offers exceptionally good value and is ideally located for pre- or post-theatre eating. No wonder it is a favourite of Angela Hartnett too. 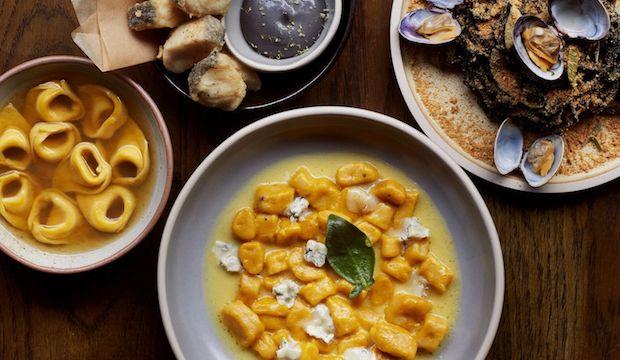 This is the full hipster pasta restaurant and that's meant as compliment rather than criticism: Shoreditch, tick: distressed bare walls and floors, tick; hanging plants, tick; and a workshop counter front of shop where artisanal pasta is constantly being made with huge shiny red retro industrial scales on show; huge tick. Officina 00 takes a liberal attitude to classic dishes although there's no compromise on thoroughly excellent pasta. The co-owners hail from Naples, and have cooked at Kiln and run front of house at Ella Canta (the charming Enzo Mirto), and so their interpretation is liberal and forward-looking.

Memorable bruschetta come slathered with stracciatella cheese (the creamy strands of burrata) and confit tomatoes with mint salsa, crisp, oil-free ravioli fillled with cacio e pepe are a huge, moreish hit. Order the pumpkin gnocchi with gorgonzola: it is meltingly delectable and a better choice than a vongole rather short on clams. Lemon or chocolate profiteroles are pleasingly generous yet the choux pastry should have been finer.

Even Marina O'Loughlin raved about Officina 00. 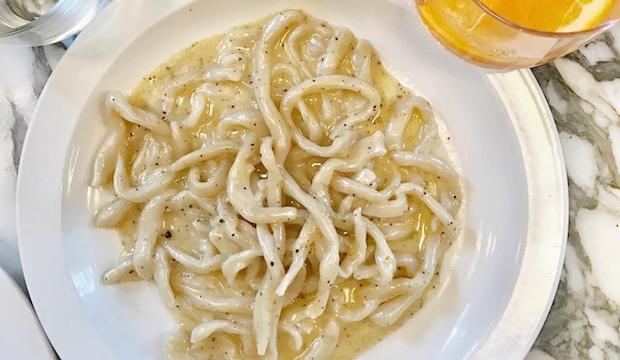 The queues are legendary and it seems joining the pilgrimage is a rite of passage for visitors to Borough Market. Be sure to arrive around 11.30am for lunch or 5pm for supper.

Does it live up to the hype?

The owners are from Islington's Trullo. Tim Siadaten and Jordan Frieda (yes, son of Lulu and hair guru John Frieda) certainly know how to make their pasta operation run slickly. The plump pici with pecorino-rich cacio e pepe have made this simple emulsion of cheese, pepper and olive oil something of an obsession among Londoners and for the princely sum of a fiver. My favourite is the more unusual tagliatelle with smoked eel and Amalfi lemon, costing £9. If you really want to push the boat out, Padella serves fantastic creamy, super-oozy burrata with a fine slick of grassy olive oil too.

However, Padella is cramped, it is counter dining only, portions are smallish, more primi than secondi size, and the experience is necessarily rushed and hardly relaxing. Now that Padella has serious competition, there are plenty of altenatives I'd happily favour. Rumours abound that a larger second Padella premises is in the offing. 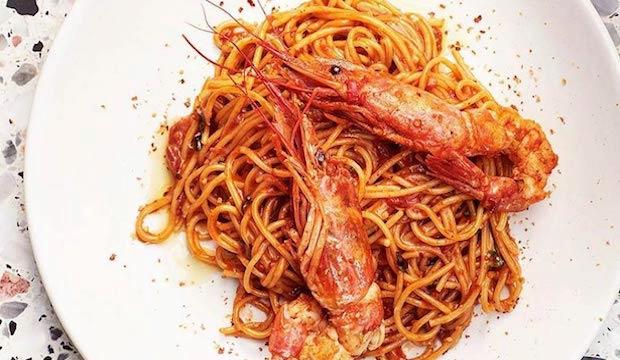 Stevie Parle, long crazy about Italian food, opened Pastaio in Soho at the beginning of the pasta bar craze. Fresh pasta is made in the window of the restaurant and dishes are well-priced, bright and colourful. Favourites include crab, tomato and ginger and a generous, vivid seafood paccheri with crab, mussels and prawns for two.

Should you have a curiosity for prosecco slushies, this is the place to indulge it. 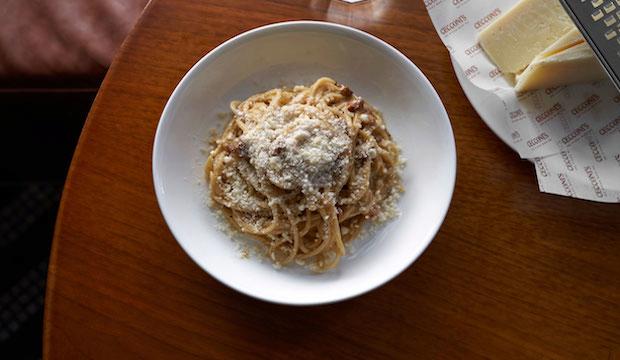 A cocktail and pasta at Cecconi's for a fiver sounds irresistible, even if it needs to be enjoyed between 3pm and 6pm.

There's a good choice of simple pasta dishes including cacio e pepe, pumpkin and sage ravioli, and real comfort food carbonara made with guincale (Italian pork cheek). Cocktails include all the Italian classics from martini to Campari and soda. 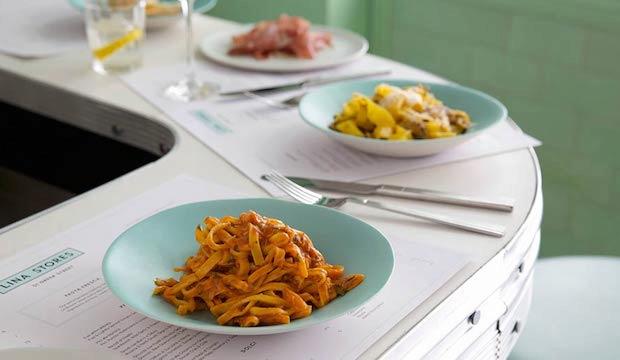 Lina Stores has been serving Soho since the 1940s, when the area was a hub of Italian living. It remains a gem with its beguiling pistachio-green striped interior and counters crammed with Italian delectables from proper mortadella to the runniest of gorgonzolas besides superb fresh pasta.

Now Lina Stores has a separate pretty Soho pasta restaurant with seating at a long zinc bar at ground level and downstairs banquettes for a more leisurely pasta experience. It is a small offering of classic pasta dishes given extra allure from pappardelle with veal ragu, rosemary and sage, fat pica with tomato and Umbrian sausage, ravioli with minted courgette, Parmesan cream and salted ricotta and luxurious 30-egg taglioni with Black cow Parmesan and black truffle. For a more substantial meal, start with impeccable salumi or aubergine polpette and finish with a lemon sorbet or cherry and almond tart.

Such has been the success of their Greek Street café, that Lina Stores has just opened a second pastericci in King's Cross. 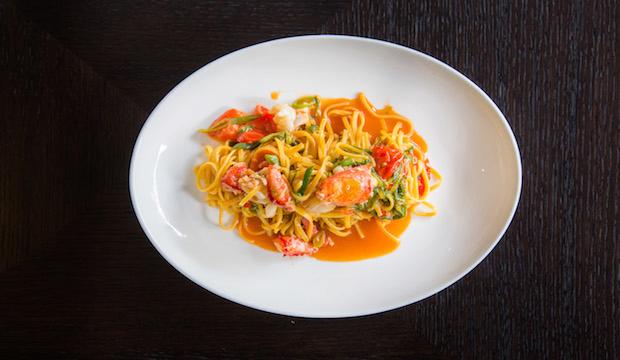 For ultra-sophisticated Italian pasta, luxe Margot in Covent Garden, run by the charming Paula de Tarso, is always going to impress. It is a beautiful restaurant with soft leather grey banquettes and lots of copper and bronze.

Two new seasonal pasta dishes are especially alluring: venison tortellini with chestnuts and a classic lobster and tomato taglioni. It's a cossetting place to enjoy a plate of Italian cured meats, a glass of Gavi di Gavi and classic Italian dishes too such as vitello tonnato served with thicker than usual slices of tuna and a properly punchy tuna and anchovy mayonnaise.

In the heart of Covent Garden, close to the Royal Opera House, Margot is the kind of La Dolce Vita place where you'll want to dress up for pasta. 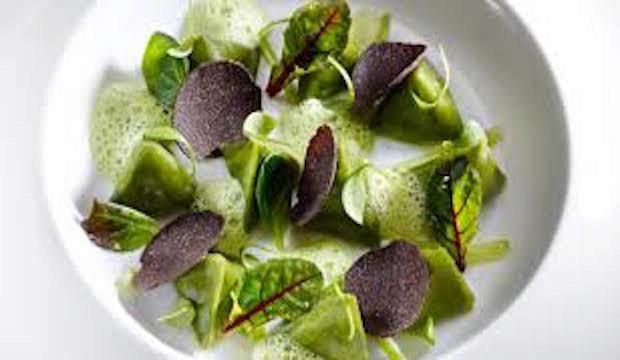 Recently awarded a second Michelin star in London, Anne-Sophie Pic has the most Michelin stars of any female chef in the world, yet she says the quintessential symbol of her cuisine is a seasonally changing pasta dish of mini ravioli or berlingots.

This is pasta at its most elegant: gossamer-thin triangles tinged green with matcha tea. The pyramid shape, inspired by berlingot sweets Pic enjoyed in her childhood, ensures an optimum pasta-to-stuffing ratio. The berlingots are filled with runny unpasturised Banon goat's cheese which has been wrapped in chestnut leaves. The watercress sauce with Japanese herbs and aromatics is inspired by her working with a perfumier to understand how to create a multi-layered complex, aromatic sauce.

It is a pasta dish like no other and the most affordable way to taste a little of Anne-Sophie Pic's brilliance. New berlingot variations are introduced seasonally.

Try too, the while millefeuille, another impeccably elegant signature dish, cloudlike in its marvellous lightness. With considerable restraint and one glass of wine, it is possible to dine relatively modestly on berlingots and millefeuille alone plus wondrous snacks including leaf-like slivers of artichoke. 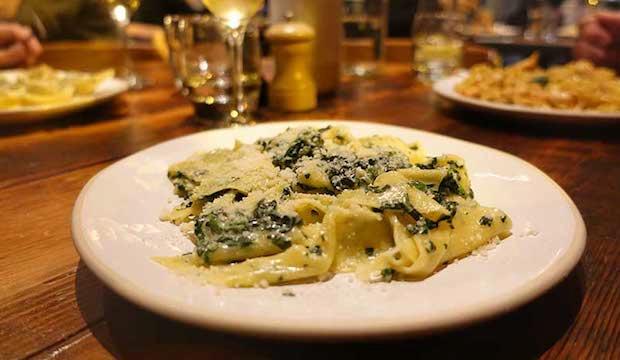 Wine is unsurprisingly an important ingredient of the Flour & Grape experience and each pasta has a suggested wine pairing. 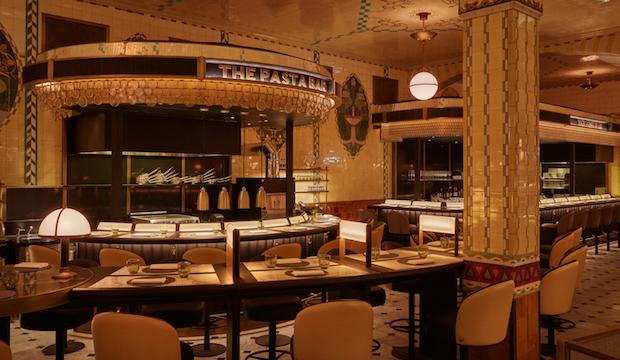 The Harrods Food Hall has been flamboyantly restored to full majesty with striking, colourful food-centric tiling, plenty of marble and opulent displays.

The former fish and meat halls have been transformed into a top-end dining hall. The Pasta Bar prides itself on impeccable ingredients. To start, there's moreish crusty focaccio splashed with a good balsamico tradizionale served with San Marzano tomatoes and burrata from London's La Latteria, or smoked tuna carpaccio with almonds. Rigatoni cacio e pepe is made with Kamut pepper and aged pecorino. More unusual pasta dishes such as mafaldi with veal cheek ragout and rare Red Cow Parmesan are a speciality. Each pasta can be enhanced with a liberal shaving of black truffle for an additional £12. The only dessert is a peerless tiramisu.