1 CW reader is interested
Lina Stores, King’s Cross Lina Stores, King’s Cross Holly CW
Birthdays are something to be celebrated – especially when it’s the anniversary of one of our favourite Italian foodie havens. Which is why we’ll be raising a Limoncello Spritz to toast Lina Stores and their 75th anniversary this autumn. But that’s not the only reason we’ll be celebrating; a second branch of the deli-restaurant hybrid is opening in Granary Square.

King’s Cross is set to be home to the new branch of this much-loved Italian pasta parlour, itself a spin-off of the long-standing delicatessen, which first opened its doors in Soho three-quarters of a century ago. This new location will delight visitors by housing a deli and restaurant under one roof for the first time. So, you can visit to pick up your authentic salumi, then stay a while longer to tuck into a bowl of Osso bucco ravioli with bone marrow butter.

Housed within a Victorian transit shed behind Granary Square, the new deli will be instantly recognisable to fans, courtesy of Lina Stores’ now-famous pastel mint and white stripes. Stocking all of the essentials needed to fill an Italian pantry, customers can stop by for their antipasti, cheeses, meats and fresh pasta – and even watch the latter being made by hand on the very premises. These items are available to eat in or take away, so you can pull up a stool and order an espresso alongside one of their delicious made-to-order sandwiches, if you wish. 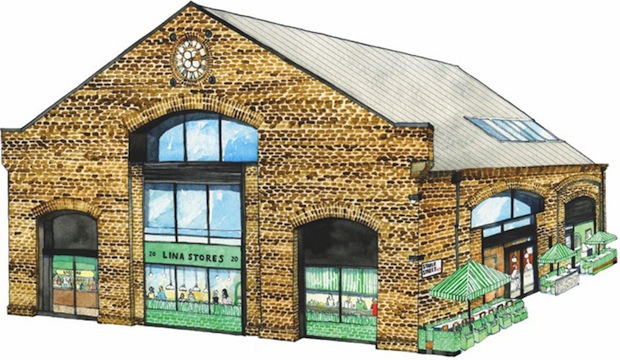 Having the restaurant under the same roof as the deli is an exciting next step for Lina Stores, after opening their first, instantly queued-for Greek Street restaurant last year. The setting is impressive and a little bit historical: the sunken booths and long banquette seating will be illuminated by the glow of the same opaline globe lights which first lit the deli at Lina Stores 75 years ago. Meanwhile, an open counter kitchen displays the chefs at work, allowing guests to enjoy the theatre of their meals being prepared.

This bigger site still focuses on fresh pasta, only with a larger menu, and includes signature dishes that celebrate Lina’s age-old traditional recipes as well as those plucked from the chef’s family history. Antipasti is not to be missed, as it’s a showcase of all of Lina Stores’ finest deli ingredients. We’ve made a note to try their new duck egg yolk Tagliolini with parmesan and fresh truffles, while the pared-back selection of secondi plates includes a sublime-sounding dish of beef cheeks in Barolo.

As is traditional in Italy, a dessert trolley will be groaning with indulgent delights such as Rum baba, Torta Genoese, Monte Bianco, Tiramisù and Cannoli, as well as home-made gelato.

Of course, one can’t really indulge in fine Italian cuisine without a glass of wine to accompany the meal, and Lina Stores caters to this with, well, their usual exquisite taste. More specifically, the wine list boasts organic and biodynamic bottles ranging from the masters of Northern Italy; Piedmont, Tuscany and Veneto, to the lesser known greats of the South; Verdicchio, Negroamaro and Primitivo.

For cocktail lovers, an intimate aperitivo bar is available for pre and post dinner tipples with Lina Stores’ full range of Italian vermouths, organic wines and classic house-made cocktails. Keep an eye out for reinvented classics such as the Italicus Sour and Pomelo Martini, while a selection of tempting homemade shrubs includes Amarena Cherry & Vincotto and Sicilian Lemon & Beetroot.

So, whether you’re an Italian seeking a taste of home, a tourist keen for authentic fresh-made pasta, or a Londoner who loves to stock up on quality Italian ingredients while enjoying an after-work-aperitvo, you’ll be sure to welcome this news with open arms – and, if you’re anything like us, enthusiastically open stomachs. 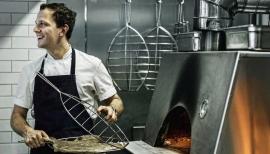 Which of the World's 50 Best Restaurants are in London? 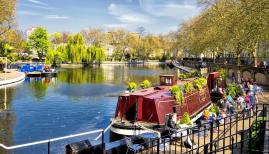