Field Day 2019: Meridian Water is the new home of the festival, with Skepta and Jorja Smith headlining in 2019

Field Day Festival, Meridian Water Field Day Festival, Meridian Water Holly CW
Poor old Field Day was displaced from its home of 10 years in east London’s Victoria Park to make room for newcomer All Points East last year. The festival downsized, taking up residence in south-west London’s Brockwell Park on the first weekend of June 2018. For whatever reason – most probably the early curfew and noise complaints – it isn’t returning there for 2019. Instead, festival-goers who wish to attend the 12th annual Field Day will need to trek north of London proper, to Enfield’s Meridian Water.

The new location has some advantages to it. Perched on the site of an old gas works next to Tottenham Marshes, the festival has four huge warehouses to play with as well as a vast amount of outdoor space – and no neighbours to worry about. As such, Field Day can hold 7,500 revellers and run until 3am – later than your average London festival (and a welcome turnaround for those who endured the sound curfew of last year’s festival).

Acclaimed British rapper Skepta is headlining Field Day on the Friday in what is scheduled to be his only London festival appearance this summer. Modern soul collective Jungle, American rapper Earl Sweatshirt and DJ Bonobo will also perform on the Friday. Then on Saturday, Grammy-nominated singer-songwriter Jorja Smith is headlining, with rapper Pusha T and DJs Diplo, J Todd Terje and Seth Troxler also scheduled to perform, making dance a central focus of Field Day 2019.

Food and drink wise, over 60 food stalls will be setting up camp inside the festival arena, along with market stands and bar areas. A good thing, too – all that dancing into the wee hours will leave most attendees needing to refuel at some point

With day tickets costing between £35 – £42.50 (and £85 for VIP tickets), Field Day 2019 is among the cheaper London festivals you can attend this summer; a weekend ticket to both days of the festival will set you back just £67.50. Those who want to stay on for the after party will be asked to add an extra £16.50 on to the ticket price for one night of raving, or £22 for both nights, when booking. 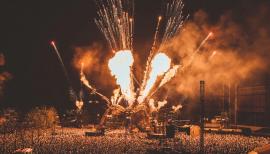