R’n’B queen Kelis is headlining Peckham’s Jam on the Rye festival, a celebration of music and street food

Jam on the Rye, Peckham Rye Park Jam on the Rye, Peckham Rye Park Holly CW
Peckham’s day-long music festival Jam on the Rye returns for a second year on Monday 27 May, with R’n’B veteran Kelis to headline. The American singer-songwriter shot to fame both sides of the pond with hit single ‘Milkshake’ in 2003. Today, she’s sold over six million records worldwide and released further hugely successful hits such as ‘Trick Me’ and ‘Millionaire’. Kelis is being joined by British DJ Jazzie B, a founding member 80s band Soul II Soul, and British soul singer and songwriter Omar, a former collaborator of Stevie Wonder.

Jam on the Rye is very much a family-orientated festival. This year, there will be a kids’ dome where activities run by Superhero Academy and Big Bubble games will keep little ones entertained. There will also be a ‘slime factory’ for those who like to get their hands dirty, circus skills workshops, a library hosting storytelling and a kids’ disco to boogie in.

The festival is as much about the food as it is the music. Stalls from gourmet street food collective KERB will form the body of the gastronomic line-up. Among those present will be Bleecker Burger and Filipino pop-up BBQ Dreamz. The latter is on the cusp of particularly exciting things, having won the latest series of the BBC’s reality TV show My Million Pound Menu. Only Jerkin’ are bringing their signature ginger beer battered chicken to the festival too, while Cane Press – the traders responsible for bringing Jamaican cane sugar juice to London – will also be there.

Jam on the Rye was a newbie on the festival circuit last year. On 28 May 2018, nearly 5,000 revellers descended on Peckham Rye Park to dance to Sisters of Reggae, radio DJ David Rodigan and Nubiyan Twist.

The day-long festival is far cheaper than many of its competitors – adult ticket prices range from £30 – £45, while teens can party there for just £15 and kids ages 12 or under go for free. When this comes with a chance to watch Kelis’s 'Milkshake' bring all the boys to the yard – sorry, park – it’s surely a bargain. The boys (and girls) are waiting… 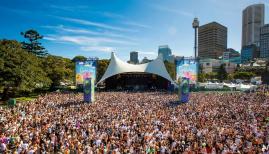