If the thought of all that hard work feels overwhelming, then fear not, for Webster's new home in Mount Street welcomes shoppers with calming grey interiors and relaxing, pastel-purple sofa, in a space designed in collaboration with Studio XAG’s Xavier Sheriff and Gemma Ruse, and Simone Suss from Studio Suss.

In homage to the traditional architectural heritage of Mayfair, the store features a classical interior, spiced-up with details from Sophia Webster's cult collections, including butterflies and flamingos on fixtures and the use of Sophia Webster heels as hooks from which to hang the latest range of handbags -- displayed in its entirety for the very first time. 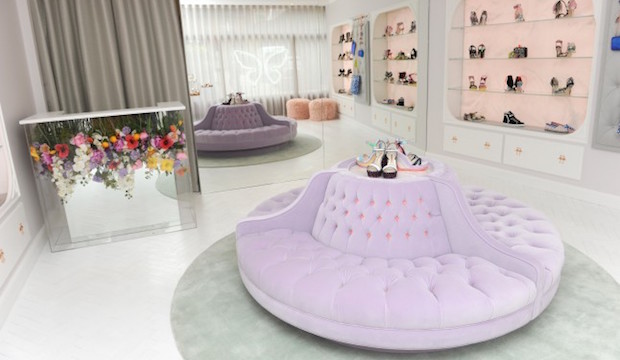 Webster's cultish neon-bright candy coloured shoes and bags, decorated with ruffles, stripes, beads, bows and most famously, wings, only arrived onto the fashion scene three years ago. With the opening of her first shop this month, Webster's success is truly staggering.

Before Webster's debut collection launched for SS13, she had worked as a design assistant to Nicholas Kirkwood and scooped up an MA footwear course at the Royal College of Art. Webster's 720k Instagram followers are testament to the popularity of her designs, and her incredibly successful e-commerce site and Snapchat have helped build a loyal fanbase who are used to hunting for their favourite vibrantly bright shoes in the likes of Dover Street Market, Harvey Nichols, Browns and net-a-porter. Until now, of course.

When you arrive at the store, listen out for the carefully curated playlist, put together by Sophia Webster's personal friend Katy B, as you sit on the sofa and accessories your feet and your life. See you there.