Killing Eve season two is back and so is its stylish assassin, Villanelle, with a wardrobe to die for 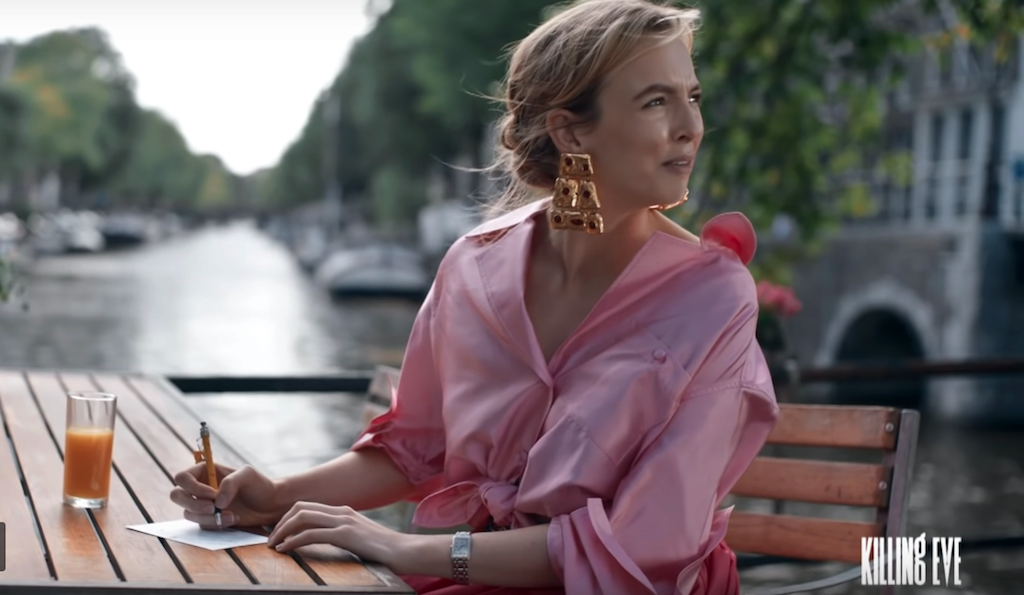 Killing Eve season two: Villanelle’s fashion
Hit series Killing Eve returns to UK screens on Saturday 9 June, and after being wounded by Eve Polastri (Sandra Oh), Villanelle is more dangerous than ever. After it was announced that Phoebe Waller-Bridge would be replaced as the show's head writer by Emerald Fennell (The Crown), there was plenty of pressure on season two to deliver the same colourful excellence. Another Phoebe was also replaced. Season one's costume designer, Phoebe de Gaye filled our screens with a panoply of covetable clothing in her killer curation of Villanelle’s (Jodie Comer) wardrobe, leaving her replacement, Charlotte Mitchell, big (Balenciaga) shoes to fill in season two. Both newcomers have risen to the challenge with the second season reaching new wild and sexy heights and Villanelle's style returning more deadly than ever.

The deranged assassin is up to her old antics, performed in a dizzying array of costume changes. As well as an obsessive psychopath, Villanelle is a chameleon who gets her sick kicks by immersing herself into different roles (and haute couture dresses) to carry out her theatrical execution methods.

But after receiving a knife in the belly in the affectionate embraces of Eve, Villanelle is on the ropes for both her life and her style, as she becomes separated from the haute-couture wardrobe of her Paris apartment. Their warped cat-and-mouse game resumes and Villanelle’s creepy brand of revenge is played out through an eclectic fashion odyssey. Here's our roundup of Villanelle's key fashion moments to look out for in season two. 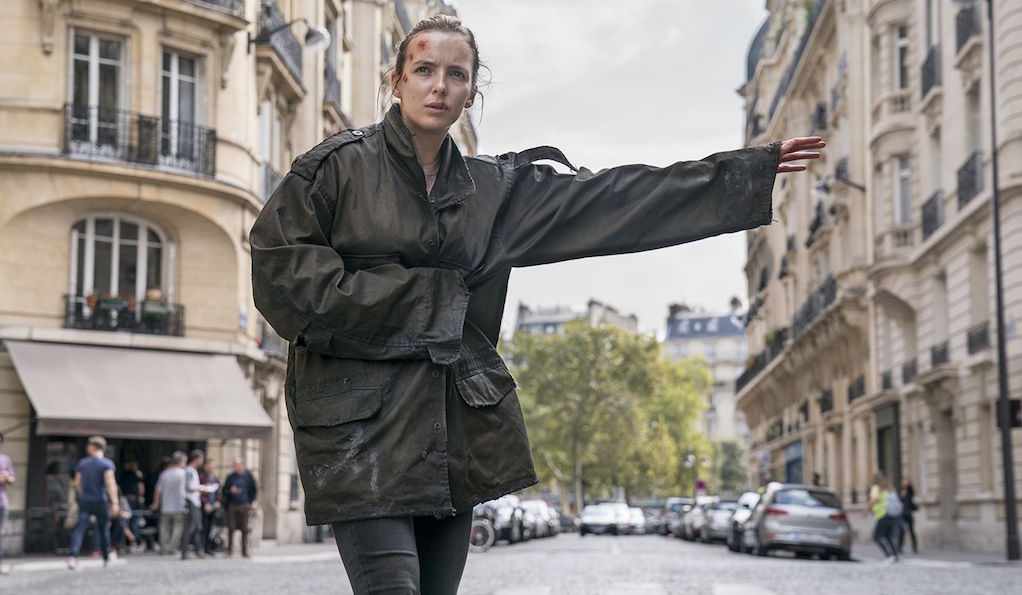 One of Villanelle's first outfits of the season is an unbecoming smog-grey jacket that she uses to cover her bleeding abdomen – a wound made doubly bitter by the fact that it was inflicted by the object of her obsessive affections, the titular Eve. This rather lacklustre entrance is Mitchell clearly setting the bar low on purpose. There’s nothing that Villanelle hates more than wearing ugly clothes. These drab garments no doubt inflame her passion for revenge. 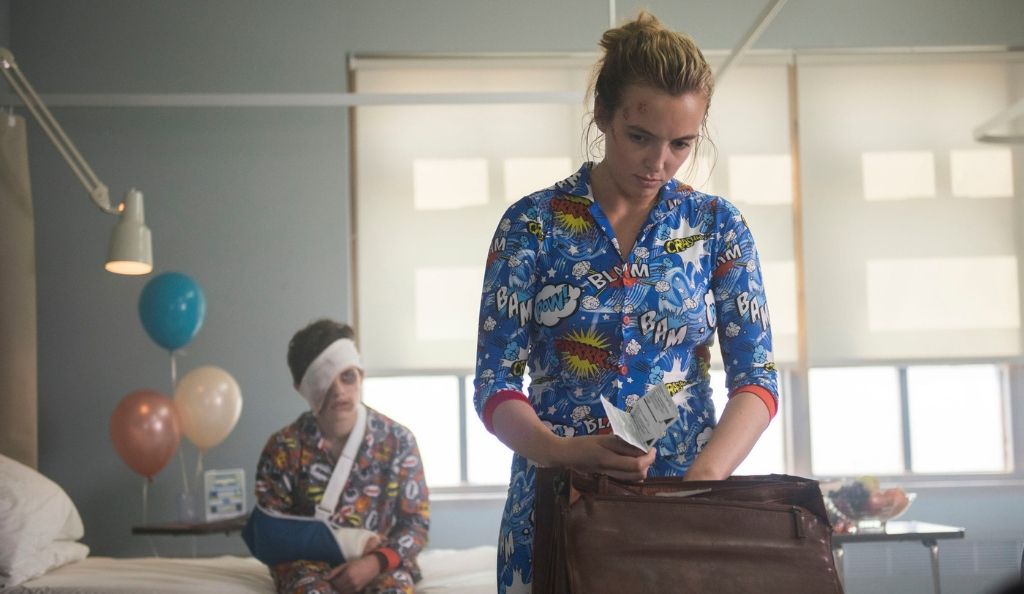 Last season, fashion-forward fans gushed over Villanelle’s Erdem floral pyjamas, which she wore whilst cooking breakfast in her apartment. However, Villanelle's sleepwear choices in season two are altogether more suspect with one of her looks being a snuggly-fitted pair of childish pyjamas splattered with a garish comic-book-strip print. This ‘Pow!’ look is not the power dressing we’re used to from Villanelle, but it definitely makes an impact.

A wolf in sheep's clothing 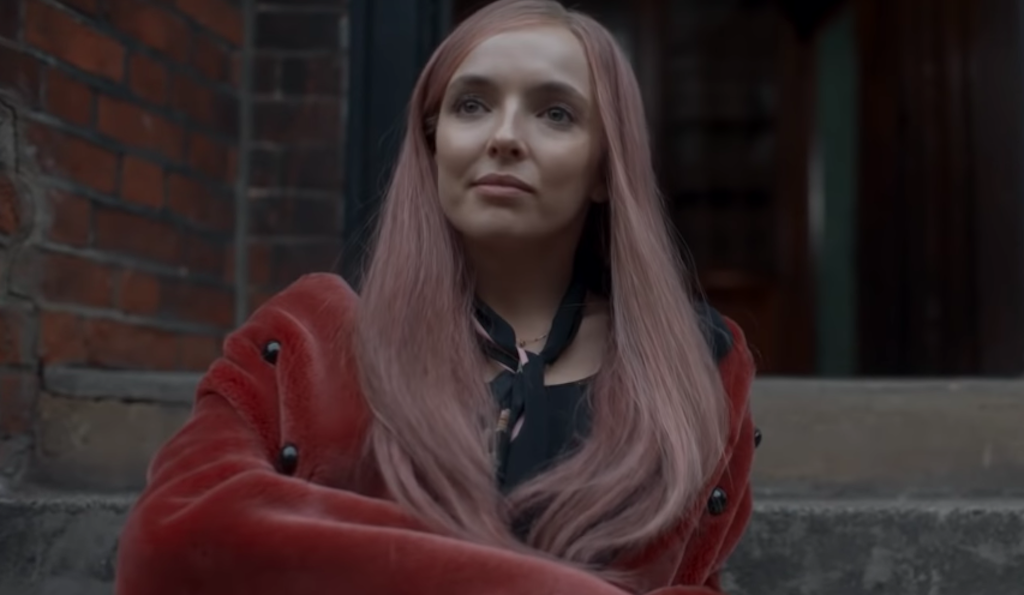 After stumbling through a series of mortifying outfits, Villanelle rises from the ashes like a horrifying phoenix. In season one, Villanelle had to trade in her furry jacket for unflattering prison wear, but in season two she gets a new Armani strawberry-coloured replacement with bubblegum coloured tresses to match. 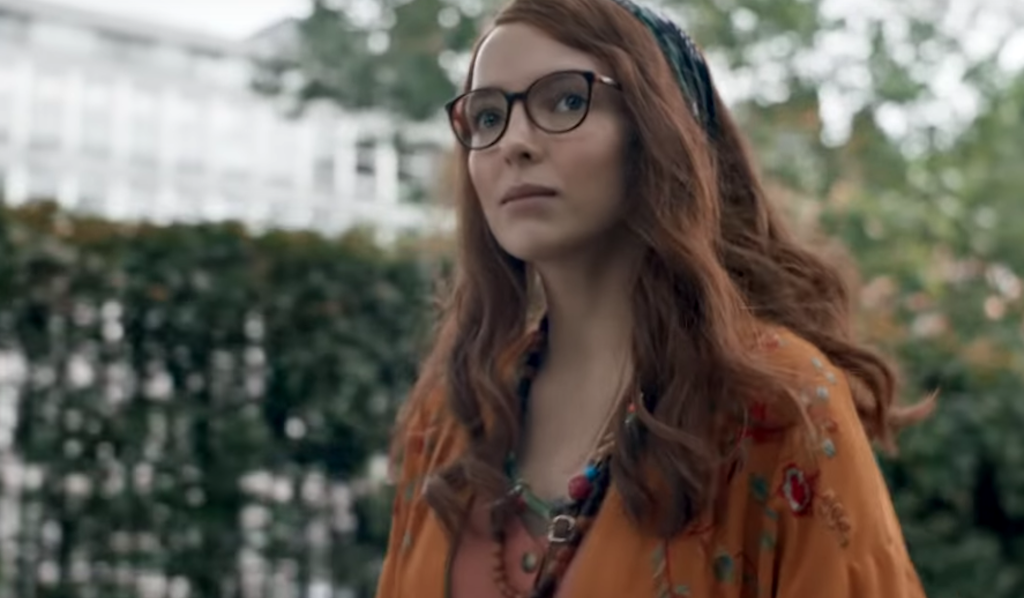 We have to admit that Villanelle's style undergoes a fair few rocky moments in season two, but some of these we’re actually really feeling. For instance, this bohemian art-teacher vibe, which Villanelle pulls off with auburn locks, glasses and an autumnal palette. Just keep the chisels away from her...
The return of the pink 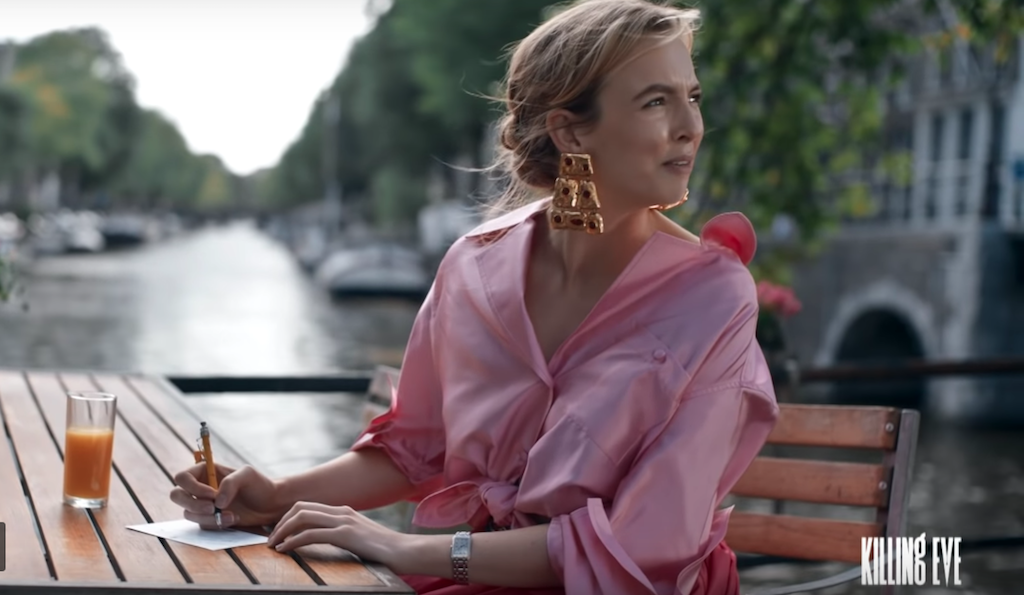 Villanelle loves to use pink to add a playful edge to her wardrobe – who can forget that pink Molly Goddard tulle dress she wore during her psych evaluation. The colour resurfaces again in Amsterdam, where she sits canalside with Instagram-worthy oversized gold earrings, a baby-pink shirt and a puffy, salmon skirt. Her fabulousness attracts the curiosity of a blogger, who asks if she can take her picture, to which Villanelle, in all her caustic glory, responds ‘get a real life’. 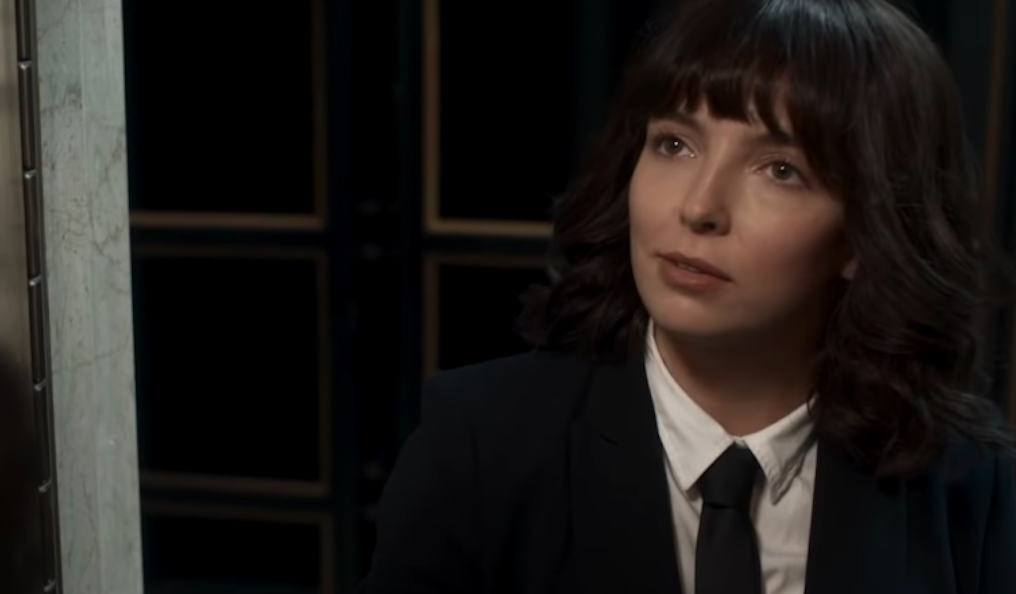 Villanelle’s tailoring has a reputation for being razor sharp, with the fashion world sitting up to take notice of her impeccably fitted pantsuit by Belgian designer Dries Van Noten. But in season two, she becomes less runway and more runaway maniac, with her tailored suits offering a sinister Charlie Chaplin vibe in an outfit that also shows off her penchant for wigs.

The Lady in Black 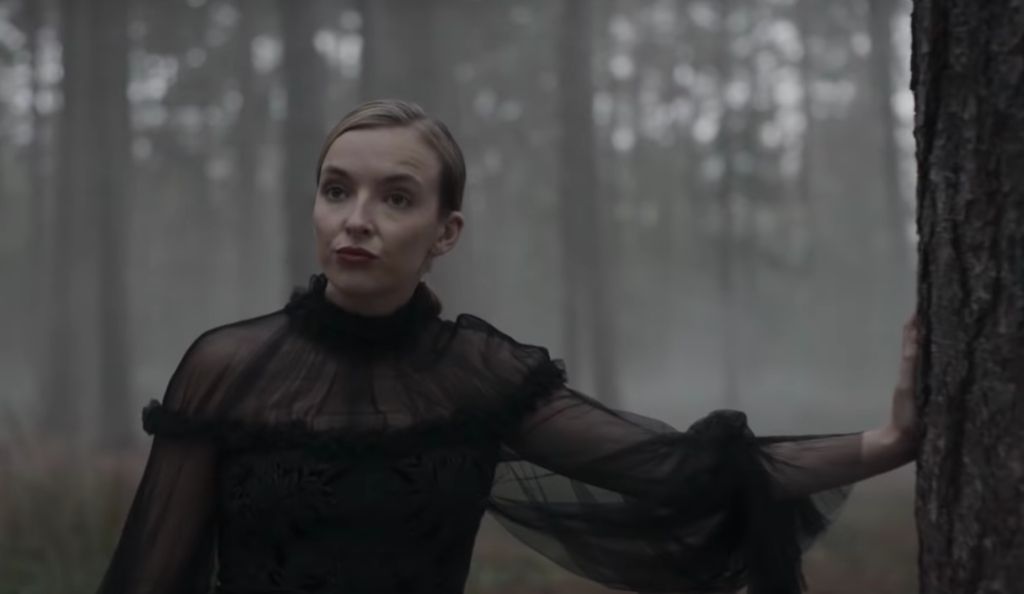 In one of her darker looks in season two, Villanelle appears like a ghostly apparition in the forest with blood-red lipstick and a 2012 Alexander McQueen couture dress. This sombre gown is the complete antithesis to the frothy Molly Goddard number, but it is certainly on-brand for her love of melodrama. 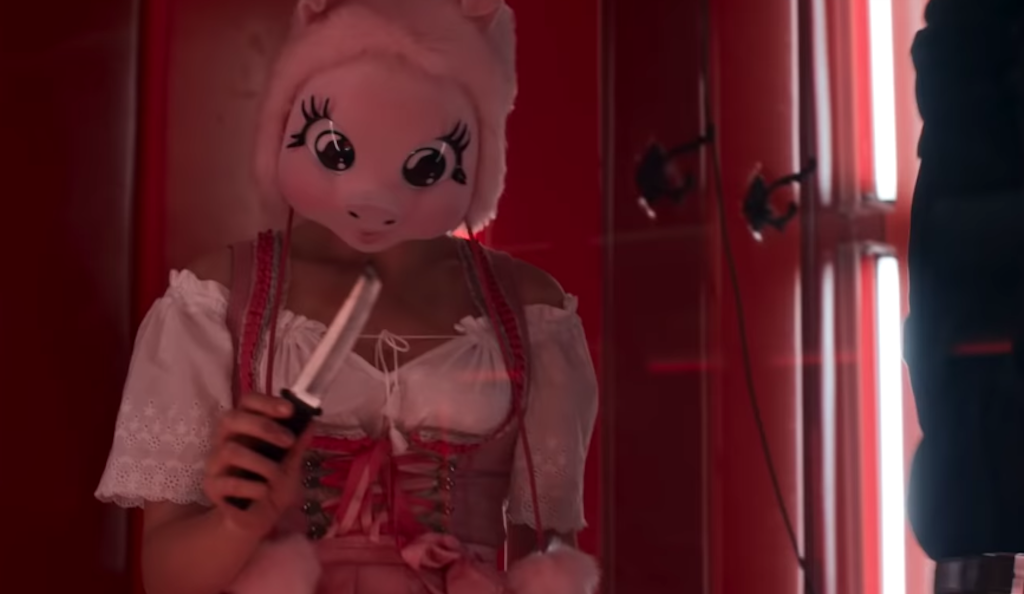 The sartorial expression of Villanelle’s demented personality reaches its climax in this horror-story of an outfit, which seems to be a combination of a German milkmaid and Miss Piggy. Granted, these are two perfectly harmless entities, but when they’re inhabited by a knife-wielding maniac with a track record of cutting off precious extremities, you’ll have cause to run in the opposite direction.

Killing Eve season two drops on BBC Three on Saturday 9 June. It also airs episodically on Saturdays at 9:15pm on BBC One. Read our review of the season here.