Now based in The Hague under the directorship of the Dutch former prima ballerina Igone de Jongh, the 50-strong United Ukrainian Ballet’s first production is Giselle, staged by choreographer du jour Alexei Ratmansky, who grew up in Ukraine.

Despite some significant deviations, Ratmansky’s Giselle remains faithful to the essentials of this 19th century uber-Romantic work: set to Adolphe Adams’s atmospheric score, played live by the Orchestra of the English National Opera conducted by Victor Oliynik, it tells the story of the peasant girl Giselle and her love for the feckless aristocrat Albrecht (here returned to the original French Albert), his deception leading to her death.

In Act II, set in the forest at night, the wilis, spirits of maidens who died before their wedding day, force any man who ventures into their realm to dance to death; a repentant Albert is only saved by the the intervention of Giselle's forgiving spirit. 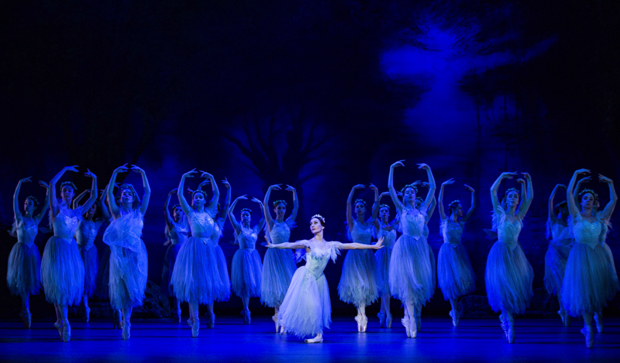 Ukrainian National Ballet, Giselle, Act II. Photo: Mark Senior
On opening night Giselle was danced by Christine Shevchenko, guesting from American Ballet Theatre where she’s a principal. Whereas in most of the versions we’re used to Giselle is a frail girl with a weak heart, Shevchenko’s Giselle is boisterous, flirty, full of joie de vivre, giving no sign of physical frailty.

This has two effects: it makes her mad scene and death all the more shocking, but also makes one wonder why her mother, Berthe (Olena Mykhailova), is so against her propensity to dance at every possibly opportunity.

Albert was danced by the dashing Oleksii Tiutiunnyk, tall, long legged and very elegant with a good jump, if often dodgy landings. Tiutiunniyk’s Albert shows no sign of the usual cad; he really loves Giselle, his remorse at her death powerful and genuine.

Throughout Act I, the mime is clear and effective: particularly spine-chilling is Berthe’s enactment of the legend of the wilis.

Ratmansky brought to Act I a series of new dances, crowding the stage with the spirited, well-drilled ensemble 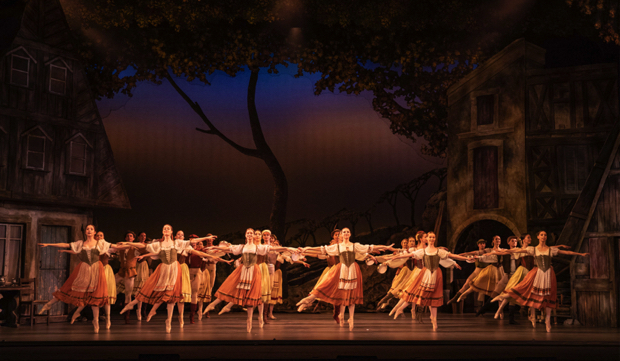 Ukrainian National Ballet, Giselle Act I. Photo: Mark Senior
Act II opens with a group of young men drinking in the forest. Hilarion, the game keeper whose unrequited love for Giselle proves the catalyst for the tragedy (Sergei Kliachin rather overacting in the brutish fashion of the villains of Soviet ballet of old) warns them they’re in mortal danger, but knowing that inexplicably stays on in the forest, and is eventually made to dance to his death.

The ensemble were a little less steady in this most demanding of white Acts; Myrtha, Queen of the Wilis, was danced with a measure of authority by Elizaveta Gogidze (who’ll dance Giselle later in the run).

Wheres Albrecht normally makes his entrance to place flowers at Giselle’s grave alone, wrapped in a voluminous black cape and carrying a bunch of white lilies – Nureyev made so much of that slow diagonal walk! – in this production Albert staggers on supported by a courtier. I don’t think that works at all.

And the decision to end not by having Giselle inexorably returning to her grave, but rather being tenderly deposited by Albert on a mossy rock seems a little odd.

Regardless of these quibbles, Ukrainian National Ballet’s Giselle is a remarkable effort by a company which six months ago didn’t even exist.

Sandwiched between solemn renditions of two national anthems – God Save the King and the Ukrainian national anthem – this performance of Giselle makes for an emotion-laden evening.

Giselle continues at the London Coliseum until Saturday, 17th September. All proceeds go to the DEC Ukraine Humanitarian Appeal