You don't have to have seen Stephen Knight’s TV series to follow Peaky Blinders: The Redemption of Thomas Shelby. The.piece, created for Rambert by Knight himself, is a sort of prequel with its own narrative coherence (dramaturg Kaite O’Reilly) and, where you need some steering, brief voice-overs by the poet Benjamin Zephaniah put you on track.

Zephaniah was, of course, born in Birmingham, where Peaky Blinders is set and where this production had its world premiere. London is seeing it at the Troubadour Theatre, Wembley Park as part of an extensive nationwide tour that will keep Rambert busy well into 2023.

The show starts in the trenches of World War I, here represented by a chasm that separates the central section of the stage from a sort of rectangular catwalk, onto which the action spills before spilling over again into the auditorium. From the trenches shell-shocked, mud-spattered, bloodied bodies emerge, among them the young Shelby men.

Zephaniah’s voice declares them dead, not because their bodies were buried, but because they’re dead inside.

That’s perhaps at the root of the ruthlessness with which they go about building their gangster empire in 1920s Birmingham, atmospherically evoked by Moi Tran's sets and Richard's Gellar's costumes. Geed up by pulsating live rock music assembled by composer Roman Gianarthur and including his own compositions alongside those of the likes of Nick Cave, Anna Calvi and Laura Mvula, the first half of the show is a high-octane hour, relentlessly following the Shelby gang as they establish their iron control of the city’s underbelly. 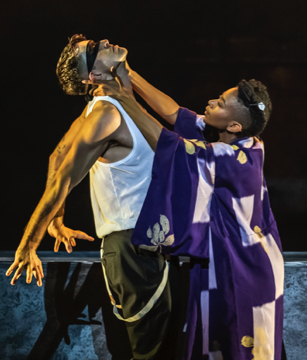 Guillaume Quéau as Thomas, Naya Lovell as Grace. Photo:Johan Persson
The choreography by Rambert artistic director Benoit Swan Pouffer, is vigorous, at times acrobatic, with syncopated gestures that respond to the music, its ensemble numbers making full use of a company in glorious form.

Act II comes in complete contrast. Racked by the grief of losing Grace, Thomas succumbs to opium, and drug-induced lassitude and hallucinations take over a drastically slowed-down narrative.

There is a redemptive tone to this Act, but redemption, when it finally comes, is ambiguous.

Rambert, which started as a classical ballet company over a century ago, is perhaps the most protean of Britain’s dance companies, and Peaky Blinders represents a new phase in its evolution, responding to Swan Pouffer’s mission to modernise it yet again and go for more diverse casting.

It’s a powerful show designed to dazzle and awe and most of the time it does that; what it doesn’t do, by accident or design, is speak to your heart.