A dark and disturbing tale, DeNada Dance Theatre’s TORO: Beauty and the Bull has opened at the Lilian Baylis Studio

By ‘the other’ he means gays, women, natives of colonised lands, people of a different skin colour, all those who are oppressed and silenced by what he calls ‘the white alpha male.’

The set in the Lilian Baylis Studio at Sadler’s Wells is hung two with strings of yellow lights, reminiscent of a circus or a fairground. On the floor, legs splayed, lies a motionless woman (Emma Walker). The programme tells us we’re in a sex worker’s parlour somewhere in colonised South America.

The men enter – coarse, boisterous, callous, taking bets as to who gets to go first. The violence they inflict on the woman is graphic, at times almost unbearably so, rhythmic pelvic thrusts the leitmotiv of the intense choreography. 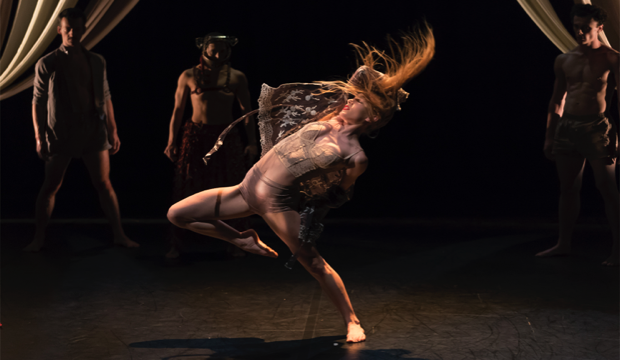 The Bull (the Spanish Toro of the title), sublimely danced by Marivi da Silva, enters. She wears a long flouncy red skirt, reminiscent of a flamenco dancer’s, a thin leather harness over her otherwise naked torso, softly curved horns on her head. At first the woman recoils in horror at what she perceives as a monster; soon, however, she realises she and the Bull are the same. Their ensuing duet of tentative mutual discovery is one of infinite tenderness and yearning. It is heart-wrenching.

The second half takes us to a circus where the performers are 'dragimals.' Like the Bull they wear harnesses and beige skirts, with various animal signifiers, for example, long ears or antennae, on their heads. Momentarily left to their own devices these gender-fluid characters abandon themselves to a joyful and proud performance.

Not for long, though. Men come in. One by one they viciously kill the dragimals. TORO ends with the Bull slowly but surely tortured to death by four implacable matadors. She doesn’t die meekly, but she dies nonetheless.

Spanish-born Carlos Pons Guerra has created an intensely emotional, thought provoking work, in his own words ‘a tragic and brutal fable’ drawing on many elements of Spanish culture, but transcending them. He is perfectly served by DeNada Dance Theatre, his vibrant small company of six excellent dancers, two women and four men.

Pons Guerra charges his contemporary choreographic language with passionate story-telling; but eloquent as it is, at times it becomes repetitive, particularly in the central sequences of aggression, where the horrifying violence goes on long after its point has been made and keenly felt by the audience.

TORO: Beauty and the Bull is, nevertheless, an original, important and hard-hitting work, which proves beyond doubt that art can campaign for a cause without sacrificing its artistic values.

Age guidance: 14 + due to nudity and scenes of a sexual nature 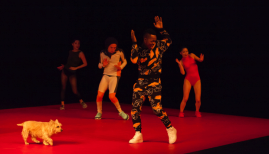 TORO: Beauty and the Bull