Cecilia Bengolea and François Chaignaud lose their way with DFS, a work that purports to fuse ballet, renaissance polyphony and Jamaican dancehall

Put them all together, assemble a small group of dancers that can more or less handle the three and what do you get? DFS. What you don’t get is any kind of coherent concept that might hold the three together.

It all starts promisingly enough, with the stage divided into two parallel stains of very diffused light. In one, barely distinguishable, two women sing eerie polyphony. In the other a male figure does a slow motion dancehall routine.

You could take that to mean that, although such forms are entirely separate, they can – and should! – be blended. Or not.

In any case, soon the stage is lit, revealing a single bright red performing rectangle. Three women in pointe shoes start on pseudo-ballet steps, before abandoning themselves (sort of) to the more contemporary language of street dance, the blocks of their shoes helping thump the rhythm on the floor.

By now the music has transitioned to recorded rap. Chaignaud comes on performing a dreamy, highly stylised kind of street-inspired dance; and soon two genuine dancehall performers from Jamaica, Damion BG Dancerz and Craig Black Eagle aka Dragon Eagle come on. They alone have earned the stars of this review.

Their dancing is superb; that of their fellow performers less so; and there is some cringe-making pointe work from one or two of the female dancers.

And that’s it, really. Half-way through Damion takes the microphone, summons volunteers from the audience onto the stage – many respond enthusiastically – and teaches them a few Jamaican dancehall moves, culminating in champion sprinter Usain Bolt’s signature move, ‘The Lightning Bolt.’

Volunteers returned to their seats, there follows another 10 minutes or so of dancing and prancing from the entire cast. Polyphony returns periodically. It's all rather strained and pointless, despite the surface jollity.

The whole performance lasts just over 50 minutes, and although that seems mercifully short, in reality it feels a lot longer, particularly when you realise it’s going nowhere. Watching Damion BG Dancerz and Dragon Eagle is enjoyable and entertaining – in our view, it's the only positive in this strange mishmash of a show. 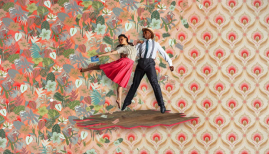