The young dancers of Shechter II acquit themselves with full honours in their inaugural programme, SHOW, now on at the Lyric Hammersmith

3 CW readers are interested
Shechter II, SHOW Review 3 Shechter II, SHOW Review Teresa Guerreiro
All plaudits to the eight young dancers that make up this year’s cohort of Shechter II, Hofesh Shechter’s rolling junior company. The pick of over 1,000 hopefuls from all over the world chosen through a rigorous audition process, they dance with remarkable maturity and complete mastery of the choreographer’s style.

SHOW, a reworking of Hofesh Shechter’s 2016 work Clowns, is what we’ve come to expect from the Brighton-based Israeli choreographer – only darker.

On a hazy stage plunged in the deepest gloom we gradually distinguish eight silhouettes. As the lighting becomes less dim, we realise some of the costumes make a nod towards traditional clown costumes, with neck ruffs and baggy trousers.

Bouts of darkness separate what are more like brief moving tableaux, where the dancers bop up and down to a distant pulsating rhythm of drums and chanting.

This is The Entrance. Clowns forms the centrepiece of the programme. Now better lit, so we can see fierce expressions and some wayward make up, the dancing gains in intensity, marshalled by a disquieting ringmaster.

Shechter, who also composed the main musical score, likes his drums: now at full volume, they command the pulsating choreography, with its 4/4 or 3/4 rhythmic hoping from foot to foot, stomping, occasional line forming, arms now raised to heaven, now pointing at the ground as the shoulders hunch forward – all very reminiscent of Middle Eastern folk dancing and a standard part of Shechter’s vocabulary.

Except there’s a sinister overtone to the whole thing, and it gets progressively darker, culminating in a long sequence where the dancers mimic killing each other in every possible way: shooting, garrotting, throat-slitting, punching… again… and again… and again, as the victims rise only to die once more or kill in their turn. 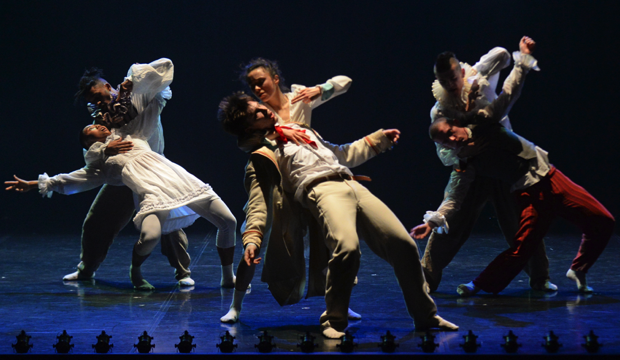 Shechter II, SHOW, Photo Gabriele Zucca
Whether this is a reference to the pervading violence in Shechter’s Israeli homeland and adjoining Palestinian territories; or a more general comment on man’s inhumanity to man; or just the kind of inescapable nightmare that sometimes besets us… who knows?

The oppressive drumming is broken by a snatch from baroque Corelli concert, which offers but a brief respite before the drumming returns in force.

The final section consists of a lengthy series of choreographed curtain calls, lighter in tone and reprising some of the images of the preceding two sections, danced to a score by the South Korean rock star Shin Joong Hyun.

The Lyric Hammersmith is a strange venue for dance. Its stage is quite high and has a raised edge, which means that if you sit in the stalls you cannot see the dancers’ feet – a not inconsiderable problem in a dance show.

Our advice: avoid the stalls and book for one of the Circles.