Their latest programme at Sadler’s Wells is a mixed bill that starts and ends with works by the choreographic duo Paul Lightfoot and Sol León, respectively Artistic Director and Assistant AD of the company.

Both show many of the quirks of the Lighfoot/León style, including expressionistic grimacing and the mouthing of silent words, as well as the extensive use of props and live video. The opener, Shoot the Moon, deals with relationships. A revolving set shows three separate rooms; within each a different love story evolves. Danced by two couples and a singleton – the seriously sexy Spaniard Jorge Nozal – to a movement from one of Philip Glass’s most melancholy pieces, his Tirol Concerto for Piano and Orchestra, Shoot the Moon is imbued with yearning. 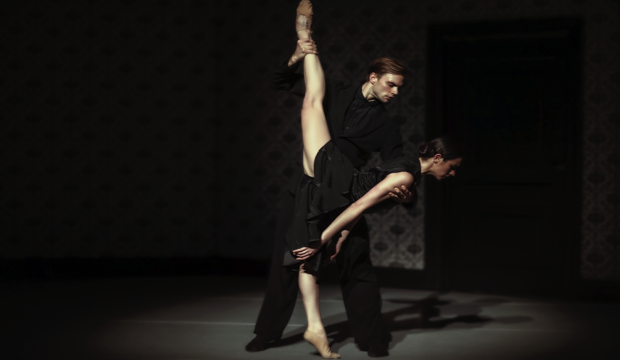 NDT1 Shoot the Moon, photo Rahi Rezvani
Extended arabesques sustained beyond what seems humanly possible, slow lifts, jerky movements all illustrate both passion and the clash between the desire to stay and the call of what’s beyond those walls. One of the women joins Nozal for an impassioned pas de deux, shown simultaneous on a large black and white video screen above the stage, before returning to her original partner.

Whereas Shoot The Moon is concise and emotionally engaging, the final Lightfoot/León work, Stop-Motion, though dotted with moments of extraordinary beauty, is disjointed, a tad pretentious and feels a lot longer than its 34 minutes.

The high point of the evening, though, is The Statement, an extraordinary piece of political dance-theatre created for NDT1 by Crystal Pite in collaboration with the playwright Jonathon Young (the Canadian duo behind the powerful, multi-award winning Betroffenheit). 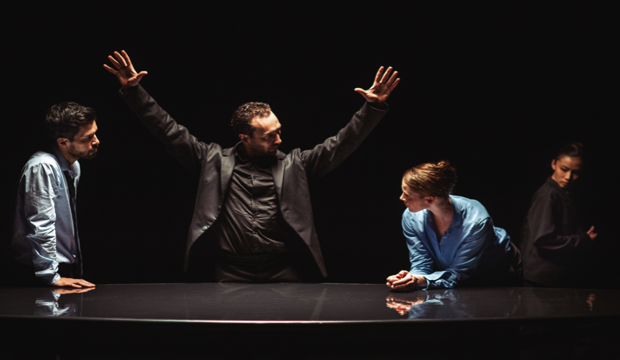 NDT1 The Statement, photo Rahi Rezavani
The set, designed by Pite’s partner Jay Gower Taylor, is an oval table, overhung by a dim light source. It could be the boardroom of a powerful multinational corporation or the meeting room of a government. Here the aftermath of a disastrous political decision is being discussed.

Four dancers express with their bodies the ever more fraught conversation we hear on voice over, which constitutes the piece’s soundtrack. A man and a woman have come to extract a statement from the other pair, who were tasked with instigating a conflict in a distant country. A suitable explanation for the debacle is required for ‘upstairs’. Somebody must take the blame, and it’s obviously not going to be ‘upstairs’. We can all make our own analogies

At 19 minutes this short dance drama packs a tremendous punch. The dancers’ body language – their choreography – becomes ever more tense and anguished, as all fight for control and exoneration. Hands clutch heads, bodies flop over the table in despair, each pair reaching out to the other only to recoil as they realise they’ll all take the blame.

Second in the running order is a piece by another NDT1 regular collaborator, the choreographer Marco Goecke. Entitled Woke Up Blind and danced to the blood-chilling guitar and vocals of Jeff Buckley, it’s a piece of the night, its seven dancers in loose red pants and naked torsos going through a complex multilayered choreography like so many reckless and fantastic creatures.