In their debut appearance at Sadler’s Wells, Semperoper Ballett dazzled with their All Forsythe programme

The programme gives a good illustration of Forsythe’s unique genius. It starts with one of his best known works, In the Middle, Somewhat Elevated. Originally created for Paris Opera Ballet, this is a piece for nine dancers to a pulsating electronic score by Forsythe’s regular collaborator, Thom Willems.

On a bare stage under two hanging golden cherries, dancers in slinky metallic green and black costumes go through a series of ever more intricate steps and combinations, all based on the classical ballet vocabulary, all gradually stretching and tilting positions and steps beyond the academic textbook. The tone is playful, sometimes agonistic, bursting with energy in whirlwinds of jumps, kicks and swerves to the relentless crashing and thumping of Willems’ score.

Neue Suite, the second piece in the programme is in striking contrast to what went before. A collage of pas de deux taken from his other works, it was especially assembled by Forsythe for Semperoper Ballet. 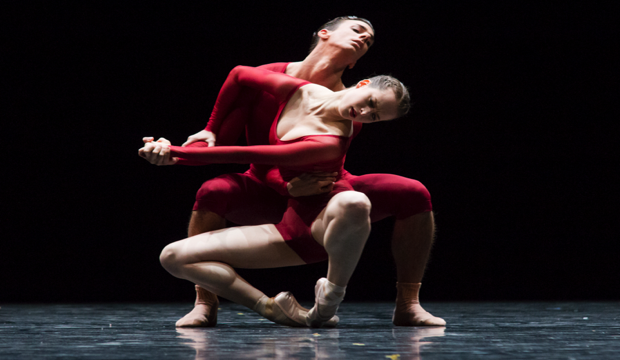 It is a study in partnering, with pieces to the music of Berio and Bach topped and tailed by duets to Händel's Concerti Grossi Op 6. The four Händel duets explore the complex layers of the baroque composer’s music, going from a flowing courtly romance where the partners rarely let go of each other to a spiky, playful, fleet-footed pas de deux, where the partners are free to engage in individual pursuits, without ever losing sight of each other.

In the middle the tone gradually darkens and gains in emotional depth as we go through the duets of Berio 1–2–3, and then enters a mood of the purest classicism in the piece to Bach’s Allemande Partita No 1.

Although it feels profoundly unfair to single out one dancer from among this remarkable company, Sangeun Lee is arresting in the Bach pas de deux. Tall, lithe and long limbed, there is something totally compelling about her lines, the soft abandon of her back and head, the dreamy fluttering of her hands. Ably partnered by Christian Bauch, Lee provided a special highlight in an evening full of highlights.

All Forsythe ends with the master at his most experimental and challenging. 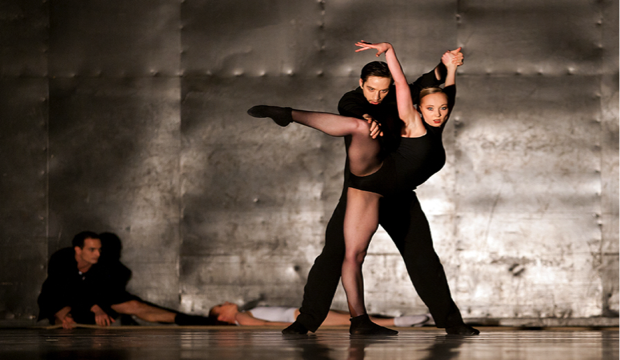 Enemy in the Figure, choreographed to another score by Thom Williems, is a totally different work. There is a set, dominated by an ondulating wooden wall that splits the stage. The score creates a menacing atmosphere; and at first there is a stifling sense of confinement, dancers scratching at walls, as if a story is about to develop.

This is Forsythe, though, so don’t expect a narrative. Rather, expect a rigorous exploration of form and chaos, an exhilarating and demanding explosion of movement, under a floodlight moved around by the dancers themselves, which creates light and shade, and illuminates and much as it obscures.

In the light/darkness, sometimes front of stage, sometimes on the margins, occasionally behind the wall, the dancers create quirky, uneasy, angular geometries, bursting on and off in fragmented phrases.

Enemy in the Figure is intriguing, mind-blowing and awe-inspiring.

All Forsythe is a thrilling calling card for Semperoper Ballett. We can only hope the company returns to London before long.

In The MIddle Somewhat Elevated

Enemy In The Figure