On the seventieth anniversary of the arrival of Britain's first generation of Caribbean immigrants, Phoenix Dance Theatre portrays their experiences in Windrush: Movement of the People

The journey of the SS Empire Windrush has become symbolic of the great migration from the Caribbean 70 years ago, and Watson has created a joyful, thoughtful and culturally important work, that explores the relationships, ambitions and hopes of the newcomers, as well as the struggles they faced.

This is not, however, a heavy piece of history: Watson’s selection of upbeat musical accompaniments means it’s hard not to feel uplifted by her take on this important era in British social history.

Snake-hipped men and joyous women in billowing floral dresses fill the stage as we are welcomed to a dockside in the Caribbean with its glowing orange backdrop. Phoenix boasts a cast of supremely talented dancers who carry off Watson’s detailed choreography with ease. Every move is deliberate, foot flexed or pointed, the ease and slickness of every lift and the tightness of the full ensemble together is impressive throughout.

This spirited beginning is in stark contrast with the immigrants’ arrival in the UK, which is a bleak affair; thick woollen overcoats now obscuring their colourful threads. A poem by Laura Serrant is read out, entitled You Called and We Came, followed by vocalist Rob Green delivering a sobering version of the National Anthem. Gone are the happy faces we saw earlier, replaced with an anxious stillness.

Watson next turns her attention to neighbourhood antics as women, whose whiteness is denoted by exaggeratedly pale masks, peer eagerly over their window boxes, curious of the newcomers. It’s another opportunity for Watson’s sharp choreography to shine with the frantic and physical movements of the masked women perfectly capturing what they perceive as a disruption of their lives.

In a particularly skilful and hard-hitting sequence, the women hang up washing on clotheslines that cross the stage, spelling out the infamous notice displayed in many rooming houses in the 1950s: 'No Irish, no dogs, no blacks.'

Watson’s choreography hits its funkiest stride in the final scene of a house party. There’s firstly a touching reunion between a husband and wife (Prentice Whitlow and Vanessa Vince-Pang), who deliver an emotionally charged duet. Pang’s balletic training is evident, her strong technique (beautifully stretched feet and delicate arms) and graceful elegance is remarkable, while Whitlow is a strong and reliable partner. 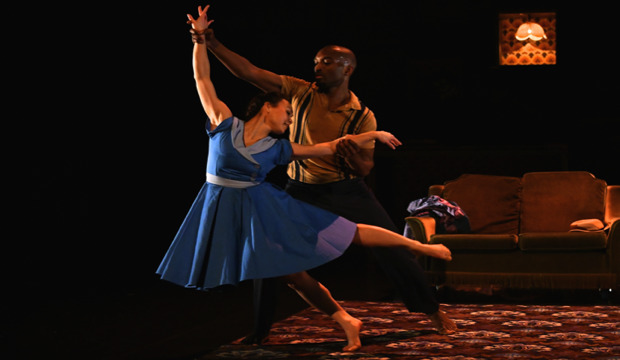 They are joined by other members of the immigrant community and the atmosphere suddenly shifts to a celebratory one before the action culminates in a live rendition of Mary Mary’s Shackles by a vibrant church choir.

With such a heavyweight centrepiece to this mixed programme it’s easy to forget there are two other fine works on offer, too. First is Sandrine Monin’s Calyx, a physically demanding piece inspired by Charles Baudelaire’s collection of poems, Flowers of Evil. The pace is unrelenting and the choreography highlights the company’s technical prowess as well as great trust in the lifts and throws between the two pairs of dancers.

Even more impressive is the brief but affecting Shadows from Christopher Bruce. It’s a beautifully crafted piece exploring the dynamic of the family environment; its suffocating intimacy and intensity makes for compelling viewing. In the final moments, the family don coats and suitcases as if embarking on a new chapter, making for a fitting prelude to Windrush.

Age Guidance: Children under 5 will not be admitted 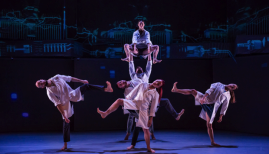 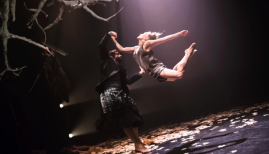 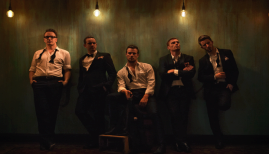 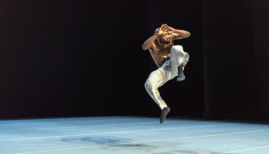 Windrush: Movement of the People