6 CW readers are interested
ENB, Voices of America Review 4 ENB, Voices of America Review Teresa Guerreiro
Praise where praise is due; and the dancers of English National Ballet (ENB) are due heaps of it. In a programme astutely put together to give the whole company – corps and soloists – the opportunity to shine, to the last man and woman they grab it with both hands and dance with flair, assurance and total commitment. Bravo one and all!

The main draw of the programme is an especially commissioned work by the hugely influential choreographer William Forsythe, now back in the USA after a long career in Europe. Playlist (Track 1, 2) closes the bill. Another, earlier Forsythe work, Approximate Sonata 2016, comes sandwiched between old – Jerome Robbins’ The Cage – and new(ish) – Aszure Barton’s Fantastic Beings.

Interesting as The Cage is (Fantastic Beings less so), the evening belongs to Forsythe. Playlist (Track 1, 2) danced to the neo-soul flow of Peven Everett and the house beats of Lion Babe/Jax Jones, is a work for 12 men, which could be summed up as company class goes clubbing.

Forsythe blends impeccably classical steps with the shuffling and shimmying of club dancing in a choreography that requires the men to show off their prowess in jumps, beats and turns to the infectious rhythm of those two tracks. First grouped in three sets of four, they dance in unison or canon; at first required to conform to the unity of the group, then allowed thrilling individuality. 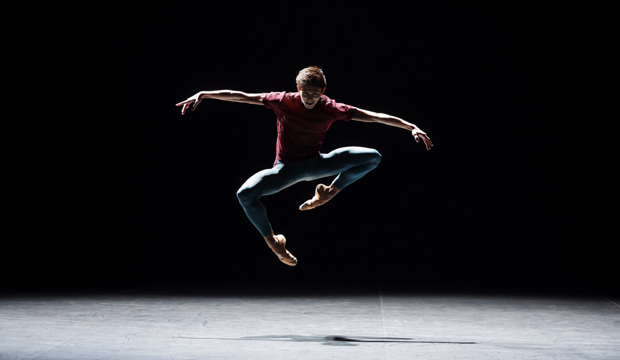 Erik Woolhouse in Playlist (Track 1, 2) by William Forsythe, photo Laurent Liotardo
As it builds up, so it brings whoops of delight from the audience, who end up clapping along to the beat and dancing in their seats.

It’s short and sweet and deeply enjoyable – Forsythe at his most playful and deceptively simple.

Humour and playfulness are also present in the earlier Forsythe piece, the rather more complex Approximate Sonata 2016, which riffs on the art of the pas de deux to a score by Thom Willems.

Four couples dance in turn, their breathing quite audible, as if in a rehearsal studio. Each pas de deux has its own character, but all illustrate the shifting balance of forces between man and woman. The delightful Alina Cojucaru, back on stage after maternity leave, is in charge in her opening and closing duets with Joseph Calley, but her imperiousness is tempered by an impish 'I didn’t really mean that...' demeanour.

Jurgita Dronina and Isaac Hernández, both superlative, bring a lyrical note to their pas; Precious Adams is all sinuous strength in her duet with Aaron Robinson; paired off with James Streeter, Tiffany Hedman in a blonde bob is all street cool and insouciance. 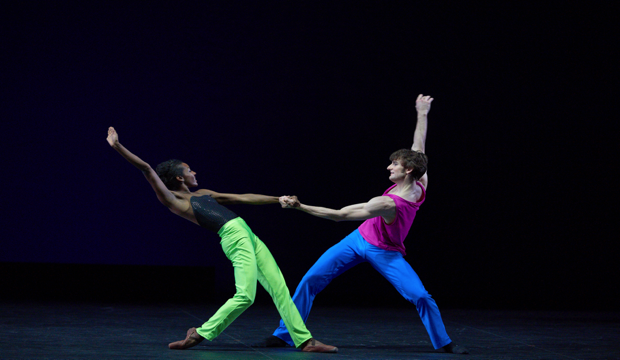 Precious Adams and Aaron Robinson in Approximate Sonata 2016 by William Forsythe, photo Laurent Liotardo
The current year marks the centenary of the birth of the great Jerome Robbins, whose work encompasses both the ballet stage and Broadway (think West Side Story). ENB pays its own homage to the master by resurrecting The Cage, choreographed in 1951 to Stravinsky’s Concerto in D for String Orchestra.

Under a gigantic spider’s web, a cohort of 12 very scary female insects led by a Queen and her Novice ferociously attack and kill any man who ventures into their territory – not unlike the vengeful Willis in Act II of Giselle, but much more graphically. 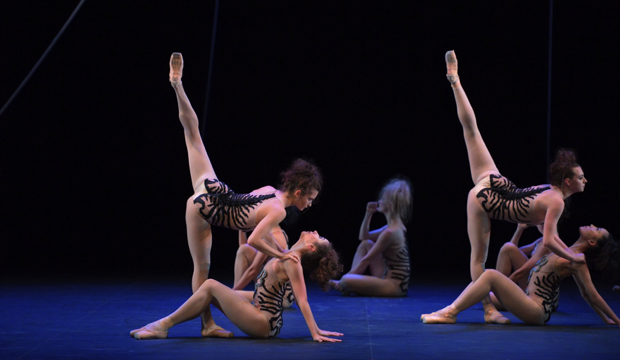 ENB, The Cage, photo Laurent Liotardo
The Cage is a piece of dance and cultural history, suffused with the existentialist spirit behind much of the work of Jean Cocteau and Roland Petit in France; and as such it is interesting and certainly worth reviving in a centenary year.

Whether Aszure Barton’s Fantastic Beings, created two years ago for ENB’s programme of female choreographers She Said, is worth bringing back is a matter of personal opinion. On a dark stage under a star-speckled sky, 20 dancers in slick ink blue unitards assume the stylised forms of various animals – an insect here, a frog there – while periodically a hairy sloth-like creature crawls across the stage. It’s a high-energy work, requiring solid technique, but not an especially interesting one.

That said, Voices of America is on the whole an excellent, intelligent programme and one that brings us dancing of the highest calibre.